The Theory Of Everything Review 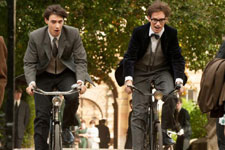 Kritika Deval / fullhyd.com
EDITOR RATING
7.0
Performances
Script
Music/Soundtrack
Visuals
9.0
6.5
8.0
8.0
Suggestions
Can watch again
Yes
Good for kids
Yes
Good for dates
Yes
Wait for OTT
No
Stephen Hawking, who recently generated media waves by proclaiming that Artificial Intelligence will prove to be mankind's downfall, is the closest that most of us know of that mythical entity. Hawking seems only the slightest bit human, having bullied his body into keeping his brain alive by what appears to be the sheer force of his will. Most of us know him only as a brilliant facsimile of humanity, a machine where in goes data, and out come perspective-altering scientific discoveries and pithy statements on the human condition.

Amid all this veneration and idolatry of someone whose achievements as well as a hyper-connected society have served to turn him into a living monument to human endeavour, it is easy to forget that there is a man underneath. And that is where The Theory Of Everything comes in.

Written by his former wife Jane Wilde, Travelling To Infinity: My Life With Stephen is about her life with Hawking, the man, first as she helps him deal with the implications of his illness, a motor neuron disease that is soon going to make it very difficult to lead a normal life, and then as she deals with the implications of both his illness and his growing celebrity. The book talks about Hawking's flaws and foibles, as well as his strengths. It talks about a brilliant young man with a brilliant future who now has to experience his body gradually die even as his mind functions as highly as ever.

It may come as a surprise, then, that this insider's look into the life and times of one of the most intelligent men alive is as myopic as any other. Director James Marsh might have set out to give us a view beneath the surface, but nevertheless allows the candy-sheen of idolatry to settle on top. Even setting aside the expected cavalier attitude to the actual "why"s and "when"s, The Theory Of Everything is woefully inadequate at explaining the motives driving its protagonists.

We begin at Cambridge in 1963 at a ridiculously retro party where two alien creatures come into contact - a science student and arts students. We are supposed to take it for granted that the Jane Wilde (Felicity Jones) of this film, a beautiful wood nymph of a girl, finds the lanky, gawky 21-year-old Stephen Hawking (Eddie Redmayne) so charming that the not-inconsiderable barriers of the academic 'caste system' are broken over the course of a conversation. Now, this is by no means an inconceivable occurrence, but it would've been nice to see the mechanics of their growing attraction in action. Instead, the film relies on Hawking's image as a lovable wit to do most of the work. We see Jane and Stephen meld their vastly different worlds in fascinating ways, and inexorably fall in love.

Meanwhile, Stephen's academic life is in full swing, with no seeming barriers to his way towards "turning back time itself to see what happened at the beginning", his purported ambition in the film. His slacker ways do not hinder his progress a whit, engendering envy and awe in all of his friends at what he can accomplish with a maximum of one hour of study a day. He is well on his way to developing an interest in black-hole dynamics that will lead to his applying the same principles to the whole universe.

These halcyon days, though, are short-lived, as pretty soon his motor neuron disease is diagnosed. What follows is a saga that is rather difficult to pin down. On one hand, considering that this is Jane's perspective, Jane's own character is a curiously flat mixture of wit, wisdom, warmth and "everything nice". While it is made very clear that their relationship and ensuing marriage aren't exactly a tenable situation, both Jane and Stephen seem to swim along in an ocean of beautifully constructed scenarios, with the weighty task of giving this ocean its depth, of articulating the joys and the anguish and the infinitesimal frustrations of living with each other, resting solely on the capable shoulders of Eddie Redmayne and Felicity Jones.

As Hawking reaches ever-growing heights of celebrity, Jane is left to deal with the brunt of day-to-day responsibilities. We see Hawking refusing to let Jane get help. We see her join the choir, and embark on a friendship with choirmaster Jonathan Jones (Charlie Cox), a friendship that soon extends to the rest of the family. Pretty soon, a bevy of "carers" drive a rift between them, with a particularly forceful nurse, a robust redhead called Elaine Mason (Maxine Peake), taking that rift that one last step further.

The Theory Of Everything is, in all the superficial ways you can think of, an excellent film. Eddie Redmayne is a revelation, his occupation of Hawking's damaged body and expansive consciousness complete. If this film does not result in a little golden man for Redmayne this year, we shall eat our nonexistent hats. Felicity Jones is gentle and strong and witty and sensitive, and does a great job with the woefully un-faceted character she is handed. The rest of the cast deal with their roles and lines with the same light touch as the protagonists.

The music is great. The camera-work and the production in general is a fluid entity that makes its own story in the background. The period detail is finicky to a fault, so visceral that getting out of the theatre gives you a sense of real nostalgia and anachronism.

But then, you look back on all that you saw, and get the feeling that, despite its best efforts, The Theory Of Everything either reduces our protagonists to "everyman/everywoman", or deifies them to the extent that they are without fault. There is very little sense that it is because this individual with these qualities in this situation would react in this way. And that is an enormous flaw for a biopic this seemingly ambitious.

As a series of beautifully constructed clichés that show that all those involved are some of the best at what they do, this film works great. If it were about random people, it would rise to the heights of masterpiece-dom. However, it isn't about random people. It is about the "Master Of The Universe", and those flocking to the theatres to watch this one will be doing so to get a glimpse into the mind that turns equations into geometry in lieu of other senses. As a sneak preview of that mind, The Theory Of Everything is about nothing in particular.
Share. Save. Connect.
Tweet
THE THEORY OF EVERYTHING SNAPSHOT 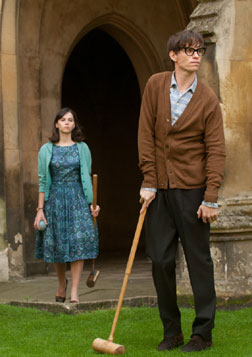 ADVERTISEMENT
This page was tagged for
The Theory Of Everything english movie
The Theory Of Everything reviews
release date
Eddie Redmayne, Felicity Jones
theatres list
Follow @fullhyderabad
Follow fullhyd.com on
About Hyderabad
The Hyderabad Community
Improve fullhyd.com
More
Our Other Local Guides
Our other sites
© Copyright 1999-2009 LRR Technologies (Hyderabad), Pvt Ltd. All rights reserved. fullhyd, fullhyderabad, Welcome To The Neighbourhood are trademarks of LRR Technologies (Hyderabad) Pvt Ltd. The textual, graphic, audio and audiovisual material in this site is protected by copyright law. You may not copy, distribute, or use this material except as necessary for your personal, non-commercial use. Any trademarks are the properties of their respective owners. More on Hyderabad, India. Jobs in Hyderabad.