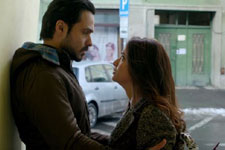 Jaiwantika Dutta-Dhupkar / fullhyd.com
EDITOR RATING
5.0
Performances
Script
Music/Soundtrack
Visuals
6.0
4.0
6.0
6.0
Suggestions
Can watch again
No
Good for kids
No
Good for dates
Yes
Wait for OTT
Yes
A lot of people say that they're haunted by their pasts. In Raaz Reboot, Shaina (Kriti Kharbanda) literally is. Her past, Aditya (Emraan Hashmi), makes inroads into her present and threatens to consume her marriage to Rehaan (Gaurav Arora). Vikram Bhatt dwells so much on the concept of revisiting past romantic affairs that given his track record, he could now do a Ph.D. dissertation on the subject if he wanted to.

Shaina (Kriti Kharbanda) and Rehaan (Gaurav Arora) are a newly married couple who've recently moved to Romania, following his promotion. However, all isn't well as she suspects that the house they live in is haunted. One fine day, she bumps into her ex, Aditya (Hashmi), who narrates incidents from her ordeal with amazing accuracy. Suspiciously, he also badmouths her husband and accuses him of murder. Shaina is intrigued by this, and together they set out to unravel the truth.

Meanwhile, back home, the husband is in a fix because the wife is acting all weird and obsessing over ghosts, disturbing him at work. In one scene where she acts weird in front of the guests, they all feel that she needs some sort of paranormal help, and so they get a psychometrist into the picture to help with the investigation. The investigation reveals that the ghost is actually Shaina's sleazy ex, a fashion photographer who was trying to blackmail them with intimate photographs of Shaina and his, when a frustrated Rehaan does what, um, needed to be done and bonks the bugger on the head with a laptop to death.

Calling Raaz Reboot a horror movie would be giving it too much credit, as it falls short on the only two things you'd go to watch a movie of this genre for - the jump scares and the sex. The sex is pretty tame and the married twosome spend a good deal apart for whatever reason. There's a scene where Shaina and the ghost do it, which is all the sex you will get to witness in the entire film. In another scene where the wife asks for some action between the sheets, Rehaan resorts to emotional blackmail, but cites no reasons and goes off to sleep by himself in the guest bedroom. That's the kind of film RR is - it brings you upto a point where you build expectations, and then fizzles out, offering zilch.

Coming to the scares, on a scale of 1 to 10, the horror in RR would be about 2. The old mansion the couple lives in is indeed large and ostentatious, but few scares happen in that palace of gold wallpapers and Translyvanian architecture. Also, RR makes the entire phenomenon of demonic possession too human - Aditya seeking vengeance against Rehaan by hurting Shaina seems sado-masochistic and more like something only mere mortals would do.

The film attempts some stylish non-linear narrative, but it doesn't actually work. The hop and skip leaves out lots of crucial bits about Shaina's equation with the spirit. The film also offers almost no background story on the ghost; for all we know or care by the way the story is told, he could've been the ghost of any stranger, and not just that of Shaina's ex.

The performances in RR are pretty good, though - the actors make a fine effort and have good screen presence. The cinematography (Manoj Soni) is above average, though not much of it has gone into scaring the living crap out of the audience. The songs are well-shot and the music (Jeet Ganguli, Sangeet Haldipur, Siddharth Haldipur) is good, too.

The writing (Vikram Bhatt), however, is pretty dismal, and the narrative fails at several places - like in one scene where all the characters actually sit down together and try to piece the story together from bits of paper on which the psychometrist has written, with Kharbanda's voiceover playing in the background. Emraan Hashmi's character could've been written in more detail. He appears and disappears with equal alacrity. The whole ex-boyfriend storyline is so formulaic and done-to-death that it's amazing Shaina and Aditya don't have more scenes together. Direction-wise, this isn't Bhatt's best.

Films like RR don't operate from any ideological persepctive; they're just there to add to the confusion that is cinema. In the climax scene where Shaina / Aditya is exorcised with much chanting of Sanskrit hymns even while the ghost yells expletives and whistles, you notice that not once have the three - Shaina, Rehaan and Aditya - had a conversation across a table - conscious, alive and unpossessed. Where would films like RR be if folks just talked out their problems like matured adults?

RR does have a ghost, but is probably not a horror movie. It's a mediocre, post-nuptial drama with a ghost thrown in as an afterthought. Watch this one at your own risk.
Share. Save. Connect.
Tweet
RAAZ REBOOT SNAPSHOT 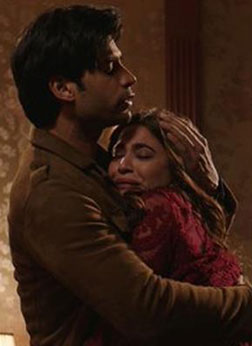 ADVERTISEMENT
This page was tagged for
Raaz Reboot hindi movie
Raaz Reboot reviews
release date
Emran Hashmi, Kirti Kharbanda
theatres list
Follow @fullhyderabad
Follow fullhyd.com on
About Hyderabad
The Hyderabad Community
Improve fullhyd.com
More
Our Other Local Guides
Our other sites
© Copyright 1999-2009 LRR Technologies (Hyderabad), Pvt Ltd. All rights reserved. fullhyd, fullhyderabad, Welcome To The Neighbourhood are trademarks of LRR Technologies (Hyderabad) Pvt Ltd. The textual, graphic, audio and audiovisual material in this site is protected by copyright law. You may not copy, distribute, or use this material except as necessary for your personal, non-commercial use. Any trademarks are the properties of their respective owners. More on Hyderabad, India. Jobs in Hyderabad.