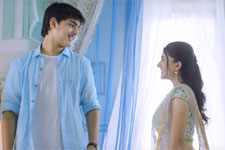 Swaroop Thotada / fullhyd.com
EDITOR RATING
4.0
Performances
Script
Music/Soundtrack
Visuals
6.0
3.0
6.0
6.0
Suggestions
Can watch again
No
Good for kids
Yes
Good for dates
Yes
Wait to rent it
Yes
Nirmala Convent tries to play a safe game by choosing an age-old plot and trying to get away with it by throwing in some fresh faces, peppy music and a special role by Nagarjuna. But the other name for safe game is "uninteresting". Not taking any risks is the biggest risk the film takes, and the director's lack of deftness in milking the clichés for commercial appeal further spoils it.

Raju garu (Aditya Menon) rules Bhupatinagaram with an iron fist, and the people tremble at the mere sight of the zamindar. David (Surya) and Mary (Anita Chowdary) are poor yet virtuous peasants whose hopes are all pinned on their son Samuel's (Roshan) academic success, which doesn't let them down until Cupid strikes the brilliant lad. And it's obviously none other than the beloved daughter of the cruel zamindar that steals our guy's heart. And he and Shanti (Shreya Sharma) go all lovey-dovey.

Adding to the class differences, the families share a bloody feud rooted in caste discrimination and authoritarian oppression. And the obvious scheme of things ensues, to allow these characters to embrace their stereotypes and to safely contain the plot within the boundary of the clichéd story mechanics dictated by the formula.

While the movie is quite hot about the princess-and-the-pauper theme, it remembers that it has to play politically correct to meet its safe-game aspirations. So we do not see these kids eloping to the city, or goons chasing them in blood-soaked fight sequences. Nor do we see them mouthing dialogues that take pains to enlighten us why love is next to God. Yes. Long gone are the days when such turns are the norm in teen romances, after Kotha Bangaru Lokam set a new formula. But it has been many years since that was new, isn't it?

So, it turns out that the zamindar challenges Samuel and his family to become millionaires, for him to consider giving his daughter in marriage. But all Samuel has is a collection of tricks from do-you-know articles that the director gathered from Google. What can anyone substantially gain from those? May be Samuel should enroll for Meelo Evaru Koteeswarudu (MEK). Oh, wait. That's what he actually does, more or less. And you don't need much imagination to predict how it all ends.

Nagarjuna effortlessly brings charm and exuberance to his role (he plays himself), but it feels overfed, thanks to the zillion references to his movies, his looks, MAA TV and the Akkineni family that the first half bombards us with. Even his fans cannot delight themselves in getting to see their star playing his off-screen persona, as it is not much different from his onscreen one and also because it is no great mystery. And that is bad news for this film which counts Nagarjuna as the its ultimate saviour.

The movie unapologetically borrows ideas from Slumdog Millionaire, but has neither the gray matter to make them look plausible nor the wit to outshine its predictability. At one stage it uncomfortably looks like a promotional video for MEK and Nagarjuna. In the climax, for each question that Sam answers, Nagarjuna just screams his lungs out in applause, only to look inane. And that's when the lack of imagination and the tediously predictable screenplay is unveiled in full display.

Roshan is good in emoting, but his polished city accent is not of any help to the Konaseema village boy he is supposed to play. Shreya Sharma puts her expressive eyes to good use but is helpless when the acting needed subtlety. It is a joy to see L B Sriram in a role that allows him to actually act. Anita and Surya deliver what is expected.

Nirmala Convent is an example to prove how boring formula movies are, and how cumbersome the task of trying to please everyone is.
Share. Save. Connect.
Tweet
NIRMALA CONVENT SNAPSHOT 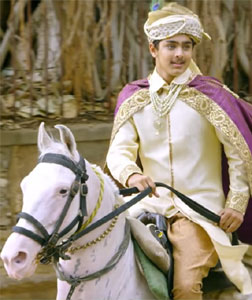