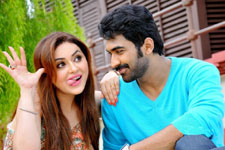 Ajay Kumar R / fullhyd.com
EDITOR RATING
4.0
Performances
Script
Music/Soundtrack
Visuals
7.0
2.0
6.0
6.0
Suggestions
Can watch again
No
Good for kids
Yes
Good for dates
No
Wait to rent it
Yes
Going for a movie being screened in barely any cinemas at all can be a gamble of sorts. You sort of know where it will lead you and how you will feel at the end of it. And once you finish watching it, you may not even know what you feel anymore - you are just glad that it is over. Dayananda Reddy's Siddhartha is one such obscure film. It throws several themes into the mix, and leaves its audiences confused.

Surya Pratap (Sagar) is the son of a people-friendly factionist who fights for the rights of the farmers. The family, quite predictably, has a rival faction that illegally controls reservoirs and mines in that region. Surya's father, after just winning a huge chunk of land and resources for his people from the faction, is assassinated. Surya and his two half-brothers set out to seek vengeance, and kill the lead patriarch of the hostile gang. Then ensues a tale of an-eye-for-an-eye between the heirs of the two families which leads to Surya seeking shelter in Malaysia using the name Siddhartha.

On the way Surya meets Sahasra (Ragini Nandwani) and they fall in love, and soon Sahasra get pregnant. Then, the faction that killed Surya's father extends the olive branch and proposes to put an end to the blood feud between the two families. Surya - who is unaware of Sahasra's pregnancy - accepts the truce hesitantly and leaves for his hometown, leaving behind his girlfriend and his unborn. But every deal has a tiny "terms and conditions" label at the bottom.

Siddhartha is a movie that questions the logic behind revenge. It wants to show that hate begets only more hate. However, too many other themes (family, love, comedy) flung at you result in plenty of erosion. A thoughtful core theme derails and dissolves into an hour of wedding porch drama with comedy in the second half that ruins the story. You wonder how the movie might have turned out had the second half focused purely on Surya contemplating the actual theme (revenge versus forgiveness) and doing something about it.

It could have also utilized the two protagonists to their fullest potential, giving us an hour of action-packed, gritty and gory happenings that would have finally led us to the epic conclusion "make love, not war". But instead, you are left to feel like you just watched a tame and censored Rakta Charitra and Srirastu Subhamastu crossover.

There are a few logical loose ends in the movie. Like, how come Vikram's sister falls heads over heels in love with Surya despite the fact that he slit her father's throat? Is accepting a marriage proposal the only way to end a blood feud in the 21st century? The two families can forgive each other for the monstrosities they committed against each other, but how can they absolve themselves of their crimes? What exactly was Surya's brother's (Subbaraju) problem, and why did Surya forget about what he did to Sahasra? The movie fails to explain these.

Television actors turned movie stars Sagar and Ragini Nandwani both give very good performances during the first half. The chemistry between them, and a sex scene (kind of) during a song sequence get worthwhile mentions. Ajay, who plays the main antagonist Vikram, does an okay-ish job, but overreacts to many simple situations. The choreography (Solomon Raju) in the film's first fight scene is done well, and is gory (the audience went "oooo that must hurt"). All other fight sequences are pretty lame. The comedians do give you a few laughs here and there, but as already mentioned, the movie could have done without any comedy. Other performances don't get much of a mention as they are given too little screentime.

The music (Mani Sharma) is pretty neat in the first half with its contemporary Western notes. The cinematography (S Gopal Reddy), especially during the songs, is really good. However the direction (Dayananda) ruins everything. 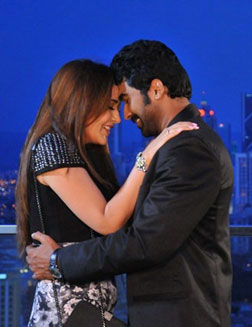 ADVERTISEMENT
This page was tagged for
Siddhartha telugu movie
Siddhartha reviews
release date
Sagar, Ragini Nandwani
theatres list
Follow @fullhyderabad
Follow fullhyd.com on
About Hyderabad
The Hyderabad Community
Improve fullhyd.com
More
Our Other Local Guides
Our other sites
© Copyright 1999-2009 LRR Technologies (Hyderabad), Pvt Ltd. All rights reserved. fullhyd, fullhyderabad, Welcome To The Neighbourhood are trademarks of LRR Technologies (Hyderabad) Pvt Ltd. The textual, graphic, audio and audiovisual material in this site is protected by copyright law. You may not copy, distribute, or use this material except as necessary for your personal, non-commercial use. Any trademarks are the properties of their respective owners. More on Hyderabad, India. Jobs in Hyderabad.