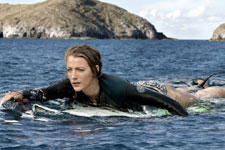 Jaiwantika Dutta-Dhupkar / fullhyd.com
EDITOR RATING
6.5
Performances
Script
Music/Soundtrack
Visuals
7.0
4.0
7.0
8.0
Suggestions
Can watch again
No
Good for kids
No
Good for dates
Yes
Wait to rent it
No
The Shallows is a riveting film about one woman's survival against Nature's fury - represented by a rabid white shark. It shows how Nancy Adams, on a nostalgic trip to a secret beach where she seeks to rekindle memories of her late mother, tests the waves alone only to discover that she's bitten off more than she can chew.

It's just a few weeks after her mother's death, and Nancy Adams (Blake Lively), a medical student, goes to a secluded beach in Mexico to surf. This is also the same beach her mother had surfed at over two decades back after discovering that she was pregnant with Nancy. Nancy is only just beginning to enjoy her new-found paradise in the Mexican beach when a shark bumps her surfboard, and she topples off, injuring herself on some rocks. The shark then bites her leg and she goes on to leave a tell-tale trail of blood for the monster fish for the rest of the film.

Nancy soon discovers her fighting spirit, and her own killer instinct comes back to save her as she clings to the carcass of a dead humpback whale, till the relentless shark topples her off that as well.

The Shallows is basically a step-by-step survival film, and though it narrates the tale selectively, its way of telling it is mostly linear and detailed. Nancy eventually finds her way to some rocks, and befriends a seagull with a dislocated wing. She uses her partial expertise as a med student to sew her lacerated leg together with her jewelry, and also fixes the seagull's wing.

The shark still stalks her like a mad thing, even while she tries to get to a buoy from where she might be able to send out a distress signal for help. Meanwhile the shark claims three other victims, and Nancy manages to get hold of an underwater camera from one of them and set it afloat with a request for help.

Nancy gets to the buoy, but the shark still wants her for dinner, and it chews up large chunks of the buoy instead. How Nancy manages to get rid of the shark and get herself rescued form the rest of the story.

A lot about The Shallows seems pretty incredulous, including the absurd vilifying of the shark in the film. It returns day after day and acts with a mean strategic sadism unexpected of a mere fish. Then, Blake Lively successfully pieces her wounds together with jewelry, and washes open wounds with sea water. She also swims through an entire army of stinging jellyfish, without much damage. Lively also spouts enough blood, but eats nothing, living her days and nights stranded on a single rock in the middle of the ocean. Indeed, the film is rather simplistically written (Anthony Jaswinski), and could have been more layered. And the direction is just about average.

The movie is however lovely to watch - and is cinematically so striking that it makes up for its lack of logic otherwise. The cinematography (Flavio Labiano) is brilliant, and there are some lovely shots of Lively swimming through lots of jellyfish, of her stranded on rocks with nothing but ocean around, and so on. There is some good underwater cinematography which makes for an interesting watch. The VFX shark is from a realm of its own, and adds pep to the narrative from the word go. Indeed, it is the visuals - and brisk editing (Joel Negron) - that save this film.

Blake Lively as Nancy Adams is amazing all through, and the shark isn't bad either. The movie also has a good soundtrack (Marco Beltrami) that adds dimension to it.

The Shallows isn't particularly horrifying for a film of the survival horror genre, but it's a short, sweet and well-made film on survival.
Share. Save. Connect.
Tweet
THE SHALLOWS SNAPSHOT 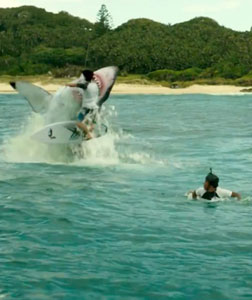 ADVERTISEMENT
This page was tagged for
The Shallows english movie
The Shallows reviews
release date
Blake Lively, Óscar Jaenada
theatres list
Follow @fullhyderabad
Follow fullhyd.com on
About Hyderabad
The Hyderabad Community
Improve fullhyd.com
More
Our Other Local Guides
Our other sites
© Copyright 1999-2009 LRR Technologies (Hyderabad), Pvt Ltd. All rights reserved. fullhyd, fullhyderabad, Welcome To The Neighbourhood are trademarks of LRR Technologies (Hyderabad) Pvt Ltd. The textual, graphic, audio and audiovisual material in this site is protected by copyright law. You may not copy, distribute, or use this material except as necessary for your personal, non-commercial use. Any trademarks are the properties of their respective owners. More on Hyderabad, India. Jobs in Hyderabad.