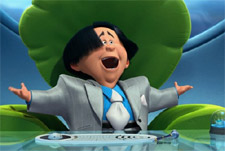 Samrat Sharma / fullhyd.com
EDITOR RATING
5.0
Performances
Script
Music/Soundtrack
Visuals
5.5
2.5
6.0
6.0
Suggestions
Can watch again
No
Good for kids
Yes
Good for dates
Yes
Wait for OTT
Yes
Dr. Seuss wrote a large number of children's books, having a successful career, but was never too afraid include serious messages in his books - always making sure children had something to think about after they finished their stories. Horton Hears A Who was a great story that taught children not to fear people different than themselves, for example. The Lorax, for those who haven't read the thin little book, is about the dangers of commercialism destroying our natural habitat.

The film based on the book, however, tries to show that theme, but is generally too busy making jokes and trying to be cool, to actually care. The film wastes no time in serious bits - even the most simple of moments with a message are steamrolled under cool graphics and jokes punctuating them.

The story is about Ted (Zac Efron), who, to impress his neighbor Audrey (Taylor Swift), a girl who wants to see a real tree, travels to the edge of the mechanical city of Thneedleville to meet the Once-ler (Ed Helms). The Once-ler tells him about the Lorax (Danny DeVito), the protector of the forest, who failed.

As Ted keeps going back to hear more of the story, an evil corporate type, Mr. O'Hare (Rob Riggle) gets suspicious, and tries to stop him because he doesn't want the trees to stop his business.

The film adds a lot of details to the story, giving Ted a name and a girlfriend, and giving the Once-ler more detail. These are not unwelcome changes, but they serve more to pad the story and to obfuscate the true message, than to flesh the story out. The addition of an evil corporate guy is a step in the right direction, but he is too much of a cartoon villain, someone you don't identify with, than the Once-ler, a relatable young fellow whose greed is the true culprit.

The film doesn't want to be just a film about environmentalism, so a lot of humour padding has also gone on. The woodland creatures have their own subplot with the Once-ler, and the Lorax himself is a bit sassy and a bit funny. It's not to say that all the jokes fail, because the humour generally works. The moments with the woodland creatures are funny and full of wit.

All the polish in the world does not detract from what is a generally cynical film, though. The film is transparently trying to get a few laughs, and to half-heartedly deliver the message. The songs, the character design, and the colour all seem false - partly because they are attempts to add padding where none was needed, but partly because they are competent yet generic. None of it has any flavour, any character - it's just made to appeal to the broadest market and sell toys at McDonald's.

A friend and his daughter were with me when I watched this film - and she had some fun moments, and wanted to buy the book later. After a reading over lunch, she asked some very important questions about trees. Keep in mind - she's 5. So go watch this film with your children, by all means, as long as the aim is for them to read Dr. Seuss' wondrous works and learn to be better people. The film itself is average, and not memorable at all.
Share. Save. Connect.
Tweet
THE LORAX (3D) SNAPSHOT 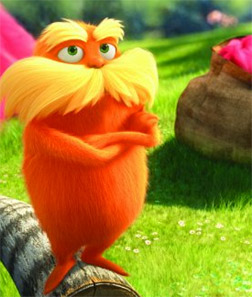 ADVERTISEMENT
This page was tagged for
The Lorax (3D) english movie
The Lorax (3D) reviews
release date
Danny DeVito, Ed Helms
theatres list
Follow @fullhyderabad
Follow fullhyd.com on
About Hyderabad
The Hyderabad Community
Improve fullhyd.com
More
Our Other Local Guides
Our other sites
© Copyright 1999-2009 LRR Technologies (Hyderabad), Pvt Ltd. All rights reserved. fullhyd, fullhyderabad, Welcome To The Neighbourhood are trademarks of LRR Technologies (Hyderabad) Pvt Ltd. The textual, graphic, audio and audiovisual material in this site is protected by copyright law. You may not copy, distribute, or use this material except as necessary for your personal, non-commercial use. Any trademarks are the properties of their respective owners. More on Hyderabad, India. Jobs in Hyderabad.