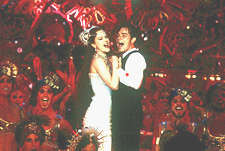 Chinmayi Sirsi / fullhyd.com
EDITOR RATING
6.0
Performances
Script
Music/Soundtrack
Visuals
NA
NA
NA
NA
Suggestions
Can watch again
NA
Good for kids
NA
Good for dates
NA
Wait to rent it
NA
It does the movie industry a whole lot of good to keep in mind that cinema is all about experimentation. Unfortunately, both Hollywood filmmakers and their audiences (that's us, by the way) seem to have become rather comfortable with the existing forms and styles of cinema, and experiments aren't always very welcome.

Moulin Rouge is, more or less, experimental cinema. It is the kind that does not fit into any of those inevitable classifications, namely action, drama, adventure, romance, comedy, musical... tempted as I might be to call it a romantic musical, I won't because it isn't that. What is it, then? Well, as I said, and as far as I can discern, it is an experiment.

It is the year 1900 in Paris, and a bearded, rather mournful writer tells the story of his lost love. A year ago, Christian (Evan McGregor) landed in Paris to be part of what he calls the Bohemian revolution. Pledging himself to the ideals of beauty, freedom, truth and love, Christian is unexpectedly sucked into the making of a play "Spectacular, Spectacular" (to be performed at the nightclub Moulin Rouge) when an unconscious Argentinean crashes into his roof. Sprouting the song "The Hills Are Alive" (from the yet to be made "The Sound Of Music", don't even ask!), Christian is immediately hired as the writer of the play.

He is then taken to Moulin Rouge where he encounters the magnificent Satine (Nicole Kidman), a dancer and a prostitute. Mistaken identity leads Christian to Satine's bedroom, where he sprouts Elton John's "Your Song" and wins the fair maiden's heart, not to mention losing his. The person Christian is mistaken for is the lecherous Duke, a potential sponsor for Spectacular Spectacular, and disaster is just about averted when he (Duke) walks in on the two of them. But disaster seems to have a way of following Satine and Christian around.

The story of Spectacular Spectacular, spun by Christian at the spur of the moment to please the Duke, is set in India, where a Maharajah and a penniless sitar-player compete for the love of a beautiful courtesan. Duke agrees to sponsor it, on the condition that Satine be pledged exclusively to him after the show. Harold Zeidler, the manager of Moulin Rouge (who loves to repeat that the show must go on), makes the deal.

To tangle it all up a little more, Ziedler discovers that Satine is suffering from a fatal disease.

The use of numerous songs that you know for sure did not exist in the 1900s (like Whitney Houston's "I Will Always Love You" and Madonna's "Like A Virgin", and believe it or not, our very own "Chamma Chamma") is rather confusing, especially since you haven't a clue what these familiar tunes are doing here. What the director wants to convey through them is unclear. The message in the movie, though, is anything but unclear - as the characters are fond of repeating, "the greatest thing you'll learn is just to love and be loved in return".

The use of light and dark shades, bright colors and overpowering, incessant music lends a different, rather shaky feel to the movie, an effect that we are not quite used to. What makes Moulin Rouge interesting is that, despite a really clichéd theme, it keeps you engrossed and watching, and that is more than one can say for a lot of movies. Once you get used to the general atmosphere of the film, you just might enjoy it.

Nicole Kidman looks beautiful and does a good job as the disillusioned prostitute who dares to aspire for love. Evan McGregor as the talented young writer in love matches Kidman's ardor. And the dialogues, though stereotypical at times, are really good.

Moulin Rouge is a curious mixture of novel experimentation and clichés, and the effect is not bad (though the music does get on your nerves at times). It is not great, either. The film leaves you feeling rather ambiguous and a little unsettled, because when it ends, you get a feeling you've missed something. The point, maybe.
Share. Save. Connect.
Tweet
MOULIN ROUGE SNAPSHOT

ADVERTISEMENT
This page was tagged for
Moulin Rouge english movie
Moulin Rouge reviews
release date
Nicole Kidman, Ewan Mcgregor
theatres list
Follow @fullhyderabad
Follow fullhyd.com on
About Hyderabad
The Hyderabad Community
Improve fullhyd.com
More
Our Other Local Guides
Our other sites
© Copyright 1999-2009 LRR Technologies (Hyderabad), Pvt Ltd. All rights reserved. fullhyd, fullhyderabad, Welcome To The Neighbourhood are trademarks of LRR Technologies (Hyderabad) Pvt Ltd. The textual, graphic, audio and audiovisual material in this site is protected by copyright law. You may not copy, distribute, or use this material except as necessary for your personal, non-commercial use. Any trademarks are the properties of their respective owners. More on Hyderabad, India. Jobs in Hyderabad.