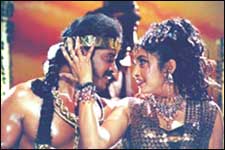 For all the uninitiated, Raktha Kanneeru is the story of this rich spoilt brat that is rich, spoilt and bratty. He's got just arrogance on his head, and a stunningly tempting street-walker in his bed. The love for his brassy lifestyle makes him so vile, that he actually kicks his own mother. What an absolutely revolting thing to do! Hope those Gucci shoes are fine. No respect whatsoever for precious footwear!

But like all the all-time popular all-time stories of all time, the evil guy has to pay for his sins. So this guy is diagnosed from severe leprosy (a fatal disease in those days. Not anymore. These days we have MTV), suffers for a great many years and dies a horrible death. A fitting end to a loathsome human being. Those poor old Gucci shoes...

Raktha Kanneeru is actually legendary tale that made a name for itself, and all the stars that acted in it, wherever it was played - whether on the stage or on the screen. It gave the Telugu industry, Naga Bhooshanam, the legendary actor. Now, it gives the industry, this, the legendary farce. Oh, pardon me all over the place, the legendary dubbed farce.

The first thing you notice is how the make-up man makes Upendra look. It's as if the Planet Of The Apes was shot in his bedroom. And that also explains the gross animalistic things they show in the songs.

The next thing you notice is how Upendra is smiling perpetually throughout the film. Like he's just let go of a bowel movement that was retained since the Nehru administration. And they found a dubbing artist to mimic those pleasing noises appropriately. This dubbing guy has done such a morbidly scary job, the next time you hear someone breaking wind, you're glad to hear it!

Then there's the issue of make-up. In the leprosy get-up, during the emotional scenes, tears preferred to roll down from the back of Upendra's head, rather than his face!

But tears would love to roll all the way down to the toes of Ramya Krishna. As the seducing temptress, and a proper vixen, she's managed to contribute quite a few thousand calories of heat to global warming. And Upendra had always the knack of showing his women in some astutely convenient camera angles.

Upendra is both the riches and the rags of the film. His performance is great but his characterization is nauseating. He's tried to bring the psychotic effect that he's good at, to an old plot, and now it's attracting flies.

If you can keep the flies, the dubbing and the make-up man off, and keep imagining Ramya Krishna instead of everyone else on the screen, then you're sure to end up... in an asylum. Try to like it as it is. And feel free to call the asylum when ready.
Share. Save. Connect.
Tweet
RAKTA KANNEERU SNAPSHOT

ADVERTISEMENT
This page was tagged for
raktha kanneeru telugu movie
raktha kanneeru old telugu movie
Raktha Kanneeru full movie downloading
Raktha Kanneeru Telugu lo
raktha kanneeru telugu audio songs
Follow @fullhyderabad
Follow fullhyd.com on
About Hyderabad
The Hyderabad Community
Improve fullhyd.com
More
Our Other Local Guides
Our other sites
© Copyright 1999-2009 LRR Technologies (Hyderabad), Pvt Ltd. All rights reserved. fullhyd, fullhyderabad, Welcome To The Neighbourhood are trademarks of LRR Technologies (Hyderabad) Pvt Ltd. The textual, graphic, audio and audiovisual material in this site is protected by copyright law. You may not copy, distribute, or use this material except as necessary for your personal, non-commercial use. Any trademarks are the properties of their respective owners. More on Hyderabad, India. Jobs in Hyderabad.