"What can you tell about a twenty-five-year old girl who died?" Need I say more before I have all you Erich Segal fans blowing off your fuses? Just in case, sample this. How would you like the finest Burgundy served to you in plastic goblets?

The beauty of masterpieces is that they cannot be mangled, however hard you may try. Despite Bollywood setting the bar really low, Mr. Govind Menon has managed to slither from right underneath it. I had always believed that we Indians had talent; we were good in whatever we chose to do; we were, in fact, the best. Now I know I was wrong. We are way ahead of the pack. No one - I repeat, no one - has flashes of such insightful inspiration. 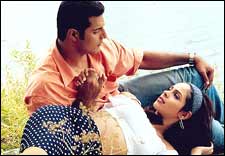 This film starts with the Hindi roopantar (hell, it is only a bland translation) of that famous opening line, and ends with that now legendary "love means not ever having to say you are sorry" line. In between, it is not much else either. Of course, you have to 'bra'ce yourself for the 'bra'sh interspersing of moral issues with the superfluously 'bra'zen discussions on Indian sexuality that tends to get a little, well, for want of a better descriptive, 'bra'ssy.

For those of you who still want to know, Amar is one stinking rich guy who hates his father. He meets one small town poor girl called Lekha. Cupid strikes, and how. They get married while he still studies and she pays the rent and for everything else by working. He finally graduates, gets a job and they move into a plush area.

Now come in the differences from the original. Suddenly their marriage is in a rut, and they try having a social life (a ruse for yet another song). That fails, and then they want a kid. (Bollywood innovation.) They can't conceive after months of trying. Consult a doctor and learn that she is about to die. An hour later, after a few more smooches and a song, she dies. (We are back to being loyal to the original.) 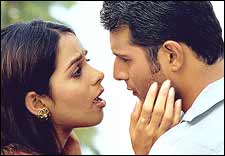 By the way, rumor is strong that Mallika and Himanshu were pretty sad when the last shot of the film was okayed, since they would not be able to act together again - till someone told them that they never actually did. But I do have to give credit where it's due. The movie did have Carrie Ann Moss in a great cameo - in the trailer of 'The Matrix Reloaded' during intermission.

ADVERTISEMENT
This page was tagged for
Khwahish hindi movie
Khwahish reviews
release date
Mallika Sherwat, Himansu Malik
theatres list
Follow @fullhyderabad
Follow fullhyd.com on
About Hyderabad
The Hyderabad Community
Improve fullhyd.com
More
Our Other Local Guides
Our other sites
© Copyright 1999-2009 LRR Technologies (Hyderabad), Pvt Ltd. All rights reserved. fullhyd, fullhyderabad, Welcome To The Neighbourhood are trademarks of LRR Technologies (Hyderabad) Pvt Ltd. The textual, graphic, audio and audiovisual material in this site is protected by copyright law. You may not copy, distribute, or use this material except as necessary for your personal, non-commercial use. Any trademarks are the properties of their respective owners. More on Hyderabad, India. Jobs in Hyderabad.