It's been a while since there's been a comedy with this much bling-bling. The last time someone really laughed this hard was when Arnold became the governor. Apart from politics, there aren't many objects that can match up to the syrup in this one. Spoofs, gags, double entendres, toilet humor, satire, stupidity and a wholehearted lack of grey matter. The only thing really missing is a Speaker screaming occasionally, "Maintain the decorum of the house, please!"

Not brave enough to face the bitter-cold weather and a Telugu movie all alone, I tagged along a friend who couldn't even spell Telugu. "NRI", he calls himself. He started laughing as soon as Allari Naresh (hero) appeared. But when I broke the news that he was the hero, he paused for a moment and then laughed out even louder. Supposedly, they had chosen the right kind of "dork" to play the lead in a comedy. So started the bumpy joyride that demanded complete absence of logic and decorum.

Allari Naresh and his sidekick are thick pick-pockets who have perfected the art of goofing up. Even we thought they were related to Anu Malik and Bappi Lahari, but they've learnt it on their own, it seems. When these guys are robbing

a ladies hostel, the heroine (Mounika) steals Naresh's heart. This starts his cycle 'impress girl', donning every disguise possible and pulling every gag possible. In the process he gets into some really messy situations with Rajendra Prasad. And it turns out that he's the heroine's dad.

Then starts another cycle of 'impress prospective father-in-law', doing some more gobbledygook and fake emotions to make sure Rajendra Prasad feels Naresh is capable enough to marry his daughter. Then there's a sidetrack of the romance between Rajendra Prasad and Ramya Krishna. To cut a long story short: we're not sure who the heck wants to know the story, but there it is. 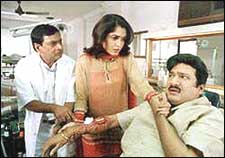 Now for the comedy bit: the first few shots are wacky parodies of scenes from Okkadu and Jayam. But the real show stealer has to be the spoof scene of The Matrix. Naresh is halfway in the air, posing like Trinity while the camera does a 360. Man, that is something. My NRI friend however got offended because we were mocking a Hollywood movie. Shucks - and I wasn't to get offended when he laughed at the all the logic holes, thinking they were part of the comedy.

Rajendra Prasad probably had déjà vu working for the film. In his heyday, he did many a laugh-riot, though none this wild. The fun in this one slipped often into stinky toilet humor, which was well received by the masses. Well received was also an item number that had a lady the size of Australia, gyrating and hip-shaking. Now I know why they're called the "masses".

ADVERTISEMENT
This page was tagged for
Maa Alludu Very Good
Maa Alludu Very Good telugu movie
Maa Alludu Very Good reviews
release date
Naresh, Rajendra Prasad
Follow @fullhyderabad
Follow fullhyd.com on
About Hyderabad
The Hyderabad Community
Improve fullhyd.com
More
Our Other Local Guides
Our other sites
© Copyright 1999-2009 LRR Technologies (Hyderabad), Pvt Ltd. All rights reserved. fullhyd, fullhyderabad, Welcome To The Neighbourhood are trademarks of LRR Technologies (Hyderabad) Pvt Ltd. The textual, graphic, audio and audiovisual material in this site is protected by copyright law. You may not copy, distribute, or use this material except as necessary for your personal, non-commercial use. Any trademarks are the properties of their respective owners. More on Hyderabad, India. Jobs in Hyderabad.