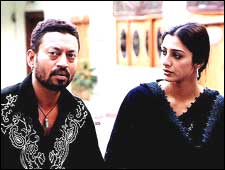 Mithun Verma / fullhyd.com
EDITOR RATING
8.0
Performances
Script
Music/Soundtrack
Visuals
NA
NA
NA
NA
Suggestions
Can watch again
NA
Good for kids
NA
Good for dates
NA
Wait to rent it
NA
Could this be the beginning of the end? Could this be the besieged termination of an irresolute giant? Could it be that the botched bungle the filmmakers like to call commercial cinema, is now an endangered clan? Could it be that even after using big words, long sentences and exciting question marks, this intro might still not work?

Could be, could not be, that is the question. Actually, that is not a question. The question is, why do we end up comparing every gangster movie with The Godfather?

Especially, since Maqbool is a sinister adaptation of Macbeth, fused broodingly into the world of deadly mobsters? The modernization of Romeo And Juliet was tried with some success in Hollywood, and so can now be said about Bollywood, too.

Jahangir (Al Capone, Don Corleone, Babyface Nestor, Pankaj Kapoor) is an aging Mafioso head, juggling carelessly with the state government, the police and his loved goomah (Tabu). This genteel boss not only hobbles amongst gun wielding thugs, but also has a gun in his mouth. That's the only explanation for the utterly suppressed sounds from his mouth, which we assume to be some dialogue.

His blatant imitation of the puffy Marlon Brando is not really inspiring. Jahangir's pet lieutenant is Maqbool (a morose-looking Irfan Khan). Maqbool is constantly shying away from the taunting passes made at him by his boss' mistress (Tabu, acting like only she can). But slowly, his reverence of his godfather crumbles as he's drawn like a moth to fire to Tabu.

Helplessly in love with her, he succumbs to her advise of clipping the boss in order to become the head. He slays Jahangir, only to realize that all that was holding this coiled spring of menace and chaos was the don, and his death will unleash the most dreaded disease in mob language - disloyalty.

Soon Maqbool and his ladylove are swarmed by the stifling guilt, greedy police and political and gang maggots that gorge on the flesh of the family, and leave it completely severed and massacred.

The two points that the movie deals with in sinister ways are: Never cut the roots of the tree to reach the fruit and never mix business with pleasure.

Tabu, as the conniving mistress and a vulnerable lover, has given a performance which should easily fetch her another National Award. Her enviable ability to portray all the shades of the rainbow with ridiculous ease, is only getting more ridiculously easy. Her penultimate scene in the film, when she's hurt to the point of being paranoid, is the best scene I've seen in many years. This is the only scene in which Irfan also breaks down.

As the silent-yet-menacing lieutenant, his rigid face and the blank eyes have said much more than all the others put together. The other lieutenant has also given a rousing performance as the guy who both hates and loves Maqbool at the same time.

The surprise package of the movie is the fabulous characterization of the two police leeches, Om Puri and Naseeruddin Shah. As the bickering, sleazy catalysts that help in burning down things while still feeding on them, they've lightened up the gloomy ambience with sheer brilliance.

Vishal Bhardwaj has missed from making a masterpiece by not taking care of the sound recording. Live sound is not a great idea when the equipment is not dependable. Also, the editing could've been better. This apart, Vishal is probably one of the best talents in the country right now. His characterization and casting are simply spectacular.

For instance, in the beginning of the movie, they show how the don can get an honest policeman off the force, and into customs, if he tries to mess with him. Later, in the climax, that very cop busts up the smuggling deal that was imperative to save the gang - sheer genius.

Maqbool is Hindi cinema at its best. Commercial or not. Period.
Share. Save. Connect.
Tweet
MAQBOOL SNAPSHOT

ADVERTISEMENT
This page was tagged for
maqbool shades
amazon
movie maqbool
maqbool movie analysis
maqbool movie anaylsis
Follow @fullhyderabad
Follow fullhyd.com on
About Hyderabad
The Hyderabad Community
Improve fullhyd.com
More
Our Other Local Guides
Our other sites
© Copyright 1999-2009 LRR Technologies (Hyderabad), Pvt Ltd. All rights reserved. fullhyd, fullhyderabad, Welcome To The Neighbourhood are trademarks of LRR Technologies (Hyderabad) Pvt Ltd. The textual, graphic, audio and audiovisual material in this site is protected by copyright law. You may not copy, distribute, or use this material except as necessary for your personal, non-commercial use. Any trademarks are the properties of their respective owners. More on Hyderabad, India. Jobs in Hyderabad.