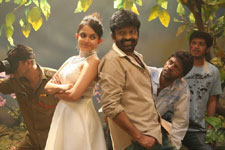 Kritika Deva / fullhyd.com
EDITOR RATING
5.5
Performances
Script
Music/Soundtrack
Visuals
7.0
5.5
5.5
7.0
Suggestions
Can watch again
Yes
Good for kids
No
Good for dates
No
Wait to rent it
Yes
The thing about black comedy is that it is funny and scary. It is funny because it points to the absurdity of the human condition, and scary because it hits uncomfortably close to the truth.

Take Gaddam Gang, for instance. Its protagonist, Gaddam Das (Dr. Rajashekhar), is a small-time schizophrenic kidnapper who is supremely comfortable with his mental illness. He calls her Sheela (Sheena Shahabadi), and proclaims that he stopped taking his medication because he found life too boring without her. The gang has three others. There is Pandu (Deepak) who is homeless because his society wouldn't go along with his plan of building a shrine to an actress, Ramesh (Satyam Rajesh) who had to "resign" from his job as a five-star hotel chauffeur when he drove off with a guest's Rolls Royce, and his brother Suresh (Achu) who gets fired over false accusations of sexual harassment. Hilarious. Because all of it could be so very true.

Several very amusing circumstances bring the four (five including the schizophrenia) together, and they all go on to kidnap many people and make quite a bit of money. Things go well for them as long as they follow Gaddam Das' rules of engagement regarding kidnappings. Basically, they are to stick to small fry, not scare their hostages unduly, not go after friends and family of important people, not try to extort amounts too large for the family to pay up, and to give up and run as far as possible the moment the plan seems shaky. These rules keep the, erm, quintet in money and out of trouble.

One fine day, though, one of their "victims" who is super-impressed with their modus operandi comes to them with an offer - Rs. 2 crores to kidnap a young man called Harishchandra (Noel), the son of a virulently honest minister (Naresh) who earned the prospective client's ire by getting his brother arrested over corruption charges.

After much conflict, the gang goes ahead with it, but from the moment they take on something that goes so very against their ideals, you can see the cracks showing up in their relationship. Cop troubles, money issues, ego problems - if you can name it, they are beset by it. And, despite the promising beginning, Gaddam Gang (the movie) starts to slowly but surely go to hell.

The worst of its descent is that even as the plot gets stretched out of proportion and the dialogue gets more mechanical, you can still see where the whole thing can be salvaged. Gaddam Gang is an adaptation of a Tamil sleeper-hit called Soodhu Kavvum, and at its heart is a down-to-earth caper where the funnies are to be had from what is rather than what the makers made it. What surround the heart, however, are unnecessary characters, acting made hammy, and, worst of all, a screenplay that gets longer the further you get into the film.

Dr. Rajashekhar is quite good when he isn't throwing out nods to himself. "Angry Young Man", he says in one scene, so totally out of context and character that even his less-than-stellar mental health can't explain it. Sheena Shahabadi is very pretty schizophrenia indeed, and seems to be having a lot of fun with her role, something that's rare in Telugu films. Achu and Noel are really good, giving great flexibility to their incredibly grey characters. Naresh is a lot of fun to watch, and does a good job of portraying all of the things people generally dislike about the overly sanctimonious. Satyam Rajesh, Deepak and the rest are, quite honestly, out of place.

The cinematography is inconsistent, swinging from exciting to sub-par without warning, augmented by a similarly confused background score. The music suits the tone of the film but won't really stick with you.

Gaddam Gang is a tease of a movie that hints at a far better film than it actually is. You won't hate yourself for watching it, but you will probably be better served by the original.
Share. Save. Connect.
Tweet
GADDAM GANG SNAPSHOT 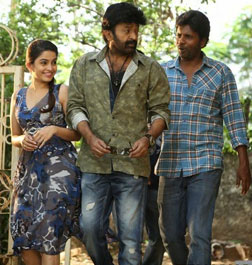 ADVERTISEMENT
This page was tagged for
Gaddam Gang telugu movie
Gaddam Gang reviews
release date
Dr. Rajasekhar, Sheena Shahabadi
theatres list
Follow @fullhyderabad
Follow fullhyd.com on
About Hyderabad
The Hyderabad Community
Improve fullhyd.com
More
Our Other Local Guides
Our other sites
© Copyright 1999-2009 LRR Technologies (Hyderabad), Pvt Ltd. All rights reserved. fullhyd, fullhyderabad, Welcome To The Neighbourhood are trademarks of LRR Technologies (Hyderabad) Pvt Ltd. The textual, graphic, audio and audiovisual material in this site is protected by copyright law. You may not copy, distribute, or use this material except as necessary for your personal, non-commercial use. Any trademarks are the properties of their respective owners. More on Hyderabad, India. Jobs in Hyderabad.