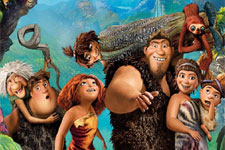 Samrat Sharma / fullhyd.com
EDITOR RATING
6.5
Performances
Script
Music/Soundtrack
Visuals
7.5
5.5
7.0
10.0
Suggestions
Can watch again
Yes
Good for kids
Yes
Good for dates
Yes
Wait to rent it
No
The name is a misnomer; Dreamworks' newest can hardly be called crude - nothing could be farther from the truth. The film is beautiful, a vista created with an amazing colour palette, with a lot of imagination and thought. The attention to detail is amazing, with the smallest of details rendered beautifully.

However, while the artistic accomplishments are indeed noteworthy, ultimately the movie falls flat by creating hollow characters, and a sense of humour that usually doesn't rise above slapstick.

Grug (Nicolas Cage) is a Neanderthal caveman who has raised a family and ensured the survival of its members by making them afraid of everything. "New is bad", is his constant motto.

His daughter Eep (Emma Stone) is born with an adventurous streak, and when she meets Guy (Ryan Reynolds), a smarter human with fire, he warns her of the end of the world. When the Croods' cave is destroyed, they have no choice but to follow Guy, which is a source of constant jealousy from Grug, the man whose strength has always protected his family.

The Croods is the sort of film that has an easy lesson for the young ones: change is good, and tomorrow is another new day. However, the lesson does not translate into an engaging movie, which requires engaging characters and a sense of danger. It's a risk-free film that coasts along on easy jokes and fast-paced action.

The celebrity voice actors are all good, especially Reynolds and Stone, but the lines are all too familiar and rote. They do their best, and Cage can always be relied upon to deliver old lines with a novel twist, and largely that works. But without memorable characters or a humour beyond physical comedy, the movie uses the technical aspects of the animation to do the heavy lifting.

This is where the film sings - even by Dreamworks' standard they have discovered a whole new way to do things that is simply breathtaking. Watching it on the big screen is often marvelous and thoroughly awe-inspiring. From the lush environments and amazing effects, to the smallest specks of dust as the characters jump and fall, it's gloriously detailed and vibrant.

The movie is visually stunning yet forgettable. It's cute and funny, and at times thrilling, but it's a shallow enjoyment, because these characters or this world will not be remembered well enough after we step out of the cinemas. At least up until the sequel drops anyway.
Share. Save. Connect.
Tweet
THE CROODS (3D) SNAPSHOT 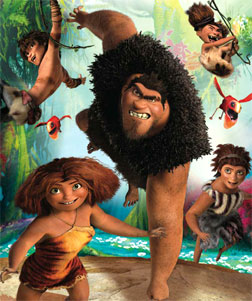 ADVERTISEMENT
This page was tagged for
The Croods (3D) english movie
The Croods (3D) reviews
release date
Nicolas Cage - Grug (voice), Emma Stone - Eep (voice)
theatres list
Follow @fullhyderabad
Follow fullhyd.com on
About Hyderabad
The Hyderabad Community
Improve fullhyd.com
More
Our Other Local Guides
Our other sites
© Copyright 1999-2009 LRR Technologies (Hyderabad), Pvt Ltd. All rights reserved. fullhyd, fullhyderabad, Welcome To The Neighbourhood are trademarks of LRR Technologies (Hyderabad) Pvt Ltd. The textual, graphic, audio and audiovisual material in this site is protected by copyright law. You may not copy, distribute, or use this material except as necessary for your personal, non-commercial use. Any trademarks are the properties of their respective owners. More on Hyderabad, India. Jobs in Hyderabad.