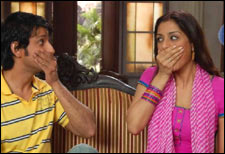 Deepa Garimella / fullhyd.com
EDITOR RATING
2.0
Performances
Script
Music/Soundtrack
Visuals
4.0
2.0
5.5
5.0
Suggestions
Can watch again
No
Good for kids
No
Good for dates
No
Wait for OTT
No
You know there's nothing going right for a movie when you have to declare Tabu its worst cast member. Indeed, Toh Baat Pakki is a "film" that Tabu won't be keen to touch, even with a barge pole, in a hurry. Bu then, let's not blame the crowd-puller for this - Toh Baat Pakki required much more work even at its scripting stages, and is something that the makers will have a tough time selling to the television networks two weeks from now.

Toh Baat Pakki is the story of Rajeshwari Saxena (Tabu), a behenji types trying to get her sister Nisha (Uvika Choudhary) hitched to the first eligible bachelor she comes across. After literally bumping into an engineering student Rahul Saxena (Sharman Joshi) on the street, she sets off a love story between the two, only unceremoniously ending it when a richer boy (Vatsal Seth) unsuspectingly walks along.

Reality is rife with now-arranged-now-broken marriage alliances of this kind, and while the basic plot is not exactly scandalous, it is the pall of mediocrity about the whole production that makes it hard to sit through. The romantic track is lit up only because of Sharman Joshi's talent, but it ends before you notice it.

Since the ending of the movie is predictable right from the word go, the challenge then, might have been to think up funny situations that will lead to the climax. Or at least, a joke or two that you can actually laugh out loud at. At the very least, one scene worth the money you paid.

Forget the funnies - Toh Baat Pakki's dialogues are written like a 3rd standard Hindi lesson, and you can't even reproduce them in a normal free-flowing conversation. The humour is not offensive, it's just distressingly ineffective. Couple that with some plastic acting by Tabu, and somehow, the experience of watching a second-rate movie such as this seems all the more surreal.

Tabu seemed to have disliked this flick, and she should have stayed away instead of putting in a singularly contrived performance. Ayub Khan looks hen-pecked enough, but if he'd been brought out of the wallpaper he might have done something worthwhile.

Sharman Joshi, fortunately, has far better material on his resume, while Vatsal Seth needs to get serious work. And for those curious about who Uvika Choudhary is, we saw her last in tiny roleOm Shanti Om in which she didn't have to act. Well, now we know she's a lousy actress.

Pritam's music, romantic numbers mostly, is more high-voltage than the rest of the flick is. A few songs are quite melodious and bubbly, and there's a decently choreographed wedding song in the end. The visuals aren't abhorrent - there has been a fair bit of creativity in some of the shots.

Save for Sharman Joshi, there's nothing much in this flick. Toh Baat Pakki then - you're not watching it.
Share. Save. Connect.
Tweet
TOH BAAT PAKKI SNAPSHOT

ADVERTISEMENT
This page was tagged for
Toh Baat Pakki hindi movie
Toh Baat Pakki reviews
release date
Tabu, Sharman Joshi
theatres list
Follow @fullhyderabad
Follow fullhyd.com on
About Hyderabad
The Hyderabad Community
Improve fullhyd.com
More
Our Other Local Guides
Our other sites
© Copyright 1999-2009 LRR Technologies (Hyderabad), Pvt Ltd. All rights reserved. fullhyd, fullhyderabad, Welcome To The Neighbourhood are trademarks of LRR Technologies (Hyderabad) Pvt Ltd. The textual, graphic, audio and audiovisual material in this site is protected by copyright law. You may not copy, distribute, or use this material except as necessary for your personal, non-commercial use. Any trademarks are the properties of their respective owners. More on Hyderabad, India. Jobs in Hyderabad.