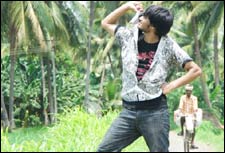 Deepa Garimella / fullhyd.com
EDITOR RATING
3.5
Performances
Script
Music/Soundtrack
Visuals
7.0
3.0
2.0
4.0
Suggestions
Can watch again
No
Good for kids
No
Good for dates
No
Wait to rent it
Yes
Kalavar King falls into that class of movies whose key redeeming feature is their second-rate-ness. Not wanting to be sucked into the deep sticky marshes of mediocrity, however, Kalavar King resorts to one last try to win audiences' hearts in the last 20 minutes - bounce a fruit off Shweta Basu's half-covered bosom. Thrice, in case you're missing the point.

No, it's not a sleazy movie, and neither is it an offensive one; it's just an anesthetizingly dull flick. The movie opens with Rajesh (Nikhil) trying to smuggle Shruthi (Shweta Basu Prasad) out of a forced wedding with a villain Shetty (Ajay), someone who's several generations short of man's advent into civil thinking. The rest of the movie is about what led to this state of affairs.

Rajesh was a compulsive defaulter back then, and owed obscene amounts of money to most of his village. When Shruthi, a random girl from his town, lost her gold chain in his home, she went berserk because it was gifted to her by her psychopathic bava, the Shetty who was introduced to us earlier.

Rajesh fooled around with the chain for a while, telling Shruthi his dog ate it, but before he could drop the curtains on his little prank he was obliged to pawn it off to get money for a friend. He deposited it with the gang of none other than Shetty. When the knot started to unravel, all hell broke lose. And oh, much, much later, the romantic track begins - and the fruit comes in for the bouncing off.

Kalavar King has a run of the mill story, and that's not the last of its troubles. The film is slow all through, and the dialogues try hard. The comedy - or at least, the attempt towards it - is what makes Kalavar King bearable to sit through despite its wishy-washy narration.

The makers try to paint on an emotional angle to the whole loan defaulter character that the hero plays, by having him atone for his peccadilloes and learn responsibility - and needless to say, it falls flat. The romantic track comes close to zero as well, since it only starts towards the end, following a rather cozy seating arrangement in an auto and two phone calls a little later.

Possibly Nikhil is what audiences might be coming in for. His flair for comedy is in place, and he's pretty good with a few other emotions as well, but he can't save what the script has doled out. As for Shweta Basu Prasad, she does a repeat of what she did in a recent cinematic accomplishment, which is basically nothing. She simpers and squeals her way through, and you know what, it's not cute. Faces like Venumadhav and Ali bring in their screen presence to the flick even if there isn't anything really funny about what they say.

The music is almost non-existent, save for an interestingly choreographed song towards the end. The rest of the songs and the background track are pretty lackluster. Production values are low, too.

On the whole, Kalavar King isn't exactly an ideal choice this weekend. You could catch it, but only if you've run out of options.
Share. Save. Connect.
Tweet
KALAVAR KING SNAPSHOT

ADVERTISEMENT
This page was tagged for
kalavar king telugu movie
Kalavar King telugu movie
Kalavar King reviews
release date
Nikhil, Swetha Basu Prasad
Follow @fullhyderabad
Follow fullhyd.com on
About Hyderabad
The Hyderabad Community
Improve fullhyd.com
More
Our Other Local Guides
Our other sites
© Copyright 1999-2009 LRR Technologies (Hyderabad), Pvt Ltd. All rights reserved. fullhyd, fullhyderabad, Welcome To The Neighbourhood are trademarks of LRR Technologies (Hyderabad) Pvt Ltd. The textual, graphic, audio and audiovisual material in this site is protected by copyright law. You may not copy, distribute, or use this material except as necessary for your personal, non-commercial use. Any trademarks are the properties of their respective owners. More on Hyderabad, India. Jobs in Hyderabad.