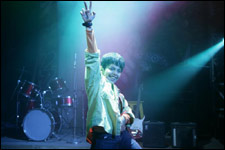 Nupur Barua / fullhyd.com
EDITOR RATING
3.5
Performances
Script
Music/Soundtrack
Visuals
4.5
2.0
3.0
4.5
Suggestions
Can watch again
No
Good for kids
No
Good for dates
No
Wait to rent it
No
The Irani sisters, Daisy and Honey, had roles re-written to accommodate them. Rishi Kapoor as an overweight schoolboy in Mera Naam Joker left grown men with misty eyes. Mayur is best remembered as the young Amitabh Bachchan, despite Red Rose. Master Raju warmed the maternal cockles of many young women. And, as recently as 1998, Kunal Khemu wowed the country with his portrayal of an angry young child in Zakhm.

We all know where Rishi Kapoor went from there, courtesy a pedigreed family. The rest faded into oblivion, as performers. Kunal Khemu has not given up hope, yet.

Circa 2007. Aamir Khan, in his directorial debut, introduced to the world a buck-toothed child. Taare Zameen Par appealed to all and sundry, and Darsheel Safary was declared a prodigy.

Cut to four years later. Darsheel Safary appears certain to join the ilk of Mayur and the rest, unless maybe he becomes an anchor for a successful television show (e. g. Aditya Narayan).

Satyajit Bhatkal and his wife Svati, along with Lancy Fernandes, just proved the adage about two (in this case, three) minds being better than one, horribly wrong. Indeed, what they were thinking when they penned the story of Zokkomon?

Did they presume that a young boy wearing an outfit (inspired by countless superheroes) and a shining, yellow glare-mask (almost Krrish) would get a young audience to clap and dance with joy? Did they think it was clever to have Darsheel look dumb? Or did they genuinely believe that they were writing a masterpiece about a bullied child avenging himself by scaring the living daylights out of grown adults, with a voice straight out of Saw and with some serious identity crises by making him a cross between Invisible Man and Astro Boy?

Zokkoman has Darsheel playing Kunal, a boy suddenly whisked away from an orphanage, much against his will, to go and live with his rich and evil uncle Deshraj (Anupam Kher), ditzy aunt (Sheeba Chaddha) and gluttonous cousin (Parth Muni), in a small town named Jhunjhunamakadstrama (the name is the only aspect of the movie that can keep you awake).

Deshraj rules this town where the people here are ensnared in superstition, the school teachers are sadistic punishers, and the students are petrified. Expectedly, at his uncle's home, Kunal has to live in a dingy room and eat whatever little is handed out to him.

Kunal becomes thick pals with Arju and his sister Rani, and they spend their free time stealing mangoes and lying on the grass. So far, so good. Only, Deshraj soon decides to get rid of Kunal to grab the Rs. 75 lakhs that the boy's father has left for him. He takes Kunal to Mumbai and leaves him there, and comes back to the town announcing the death of his nephew.

What follows is a ludicrous tale of Kunal's revenge, his intense (and convenient) relationship with Kitu didi (Manjari Phadnis) and Magic Uncle, a deranged scientist (Anupam Kher, again), and the spiritual cleansing of the irrational town with the strange name.

The movie has its moments, but very few and far between, and overshadowed by Darsheel's angry pouts and bewildered looks in almost every frame that he is in. Anupam Kher's get-up as Deshraj looks like a misplaced tribute to Amrish Puri's character in Damini, and to Hitler. And Anupam Kher as Magic Uncle looks like the woodcutter from Red Riding Hood (the fairy tale, not the movie). He must have done this as a favour, because he does not look too happy with his role.

Manjari Phadnis has no fixed look, although you keep thinking, from her expressions, that she is going to say, "What's this?" any moment now (in an attempt to remain faithful to her character in Jaane Tu Ya Jaane Na). Sheeba Chaddha is wasted, as are Parth Muni, Akhil Mishra and Tinnu Anand (who tries his best to look menacing and moronic, simultaneously).

The average cinematography and editing will disappoint you. The music is less than mediocre. However, at the risk of sounding repetitive, the main villain of this flick is the weak, illogical, and uninteresting storyline. Given the calibre of all actors involved, it is obvious that the director (Satyajit Bhatkal) has a long way to go before he can grip an audience.

The set design for the mansion interior and Kitu's abode, however, deserve special mention.

Do your kids a favour and skip Zokkomon. If you are looking for a film that teaches orphaned children how to handle harassment from teachers, rent a DVD of Matilda. For pure unadulterated fun, try Home Alone. Or look for Makdee.
Share. Save. Connect.
Tweet
ZOKKOMON SNAPSHOT

ADVERTISEMENT
This page was tagged for
Zokkomon hindi movie
Zokkomon reviews
release date
Darsheel Safary, Manjari Phadnis
theatres list
Follow @fullhyderabad
Follow fullhyd.com on
About Hyderabad
The Hyderabad Community
Improve fullhyd.com
More
Our Other Local Guides
Our other sites
© Copyright 1999-2009 LRR Technologies (Hyderabad), Pvt Ltd. All rights reserved. fullhyd, fullhyderabad, Welcome To The Neighbourhood are trademarks of LRR Technologies (Hyderabad) Pvt Ltd. The textual, graphic, audio and audiovisual material in this site is protected by copyright law. You may not copy, distribute, or use this material except as necessary for your personal, non-commercial use. Any trademarks are the properties of their respective owners. More on Hyderabad, India. Jobs in Hyderabad.