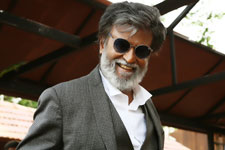 Ravi Kandala / fullhyd.com
EDITOR RATING
5.0
Performances
Script
Music/Soundtrack
Visuals
8.0
5.0
8.0
8.0
Suggestions
Can watch again
No
Good for kids
No
Good for dates
No
Wait to rent it
No
We blame that teaser for everything.

That teaser which had Rajini searing the screen with fiery brimstone in his wake as Neruppu Da played out electrifyingly in the background. That teaser which had Rajini promising damnation and purgatory with just his eyes and lines. That teaser which made you hyperventilate at the prospect of a full 150 minutes of the Superstar as a Don yet again, with all the promise it offered of you being able to scream and howl and ricochet off the walls in insatiable elation as The Man rolled out the punch dialogues mercilessly.

That teaser plays out in the first 15 minutes of Kabali. And the film then moves on to being a film.

For all the Rajini fans who went for The Spectacle, it's a big blow below the belt.

Kabali does not deliver on the kind of hype that the teaser generated, primarily because it is not the movie that the teaser promised. A movie where you see Rajini watch from the sidelines while a crime is being committed is definitely not the code the fans compiled. What Kabali is, is a slow and emotional saga of a man who is forced to pick up arms to fight for the larger good for his people, and how it affects him as a human and his personal life.

The film starts off with the Malaysian police debating if Kabaleeswaran aka Kabali (Rajinikanth) should be released from jail or not. They decide to free him, and Kabali makes his way out of prison after 25 long years. He comes out and walks straight into the den of a druglord, which can only mean a flashback. And he realizes that he will have to go back to his old ways to set things right.

Halfway into this saga, Kabali finds out that his wife and kid, who he had presumed dead, are still alive. He reunites with all of them and resumes his gangwar with the primary aim of eliminating Gang 43 lead by Tony (Winston Chao) and Veera Sankar (Kishore). How he emerges trumps forms the remaining movie. There's also a final twist which we will, obviously, not reveal.

Pa Ranjith clearly cannot handle the Superstar. He wants to tell a strong emotional tale but also wants to satisfy fans and include at least a few of the fabled mannerisms of the Superstar that the fawning media would inevitably marinate the build-up in. The result - we see two completely disjointed threads and two completely different Thalaivars. While the Rajini in the action scenes is as punchy as ever, the Rajini in the other, emotional, part of the film is someone we don't identify with. He is superb as an actor and gives a stirring performance, but the scenes scripted for him don't draw the viewer in. The few that do are drawn out for so long that they lose the desired impact. The superb soundtrack is really wasted, and is used only in bits and pieces.

The only redeeming factor in Kabali is the Superstar himself, playing an aging Don reminiscing about his family. He does not care to hide the bags under his eyes, neither does he bother coloring the grey mane. And after a long time, we see Rajini the actor instead of Rajini the star for a good length of the movie.

Radhika Apte gets a limited role and does well. Dhansika gets a role of a lifetime, and makes her portrayal one, too. The remaining support cast seem slightly out of place, though.

The film is shot well - loads of money has been spent, and it is clear in the output. The action choreography is decent, too, and the superstar is reduced to mere mortal levels in most scenes.

Kabali's teaser is like the photo of a pizza or a sundae - the actual fare doesn't match up. And somehow, it feels like a battle Rajini is doomed to fight forever now.
Share. Save. Connect.
Tweet
KABALI (TELUGU) SNAPSHOT 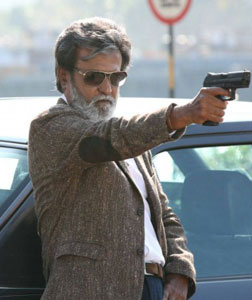 ADVERTISEMENT
This page was tagged for
kabali telugu full movie
Kabaali telugu full move
Kabali (Telugu) telugu movie
Kabali (Telugu) reviews
release date
Follow @fullhyderabad
Follow fullhyd.com on
About Hyderabad
The Hyderabad Community
Improve fullhyd.com
More
Our Other Local Guides
Our other sites
© Copyright 1999-2009 LRR Technologies (Hyderabad), Pvt Ltd. All rights reserved. fullhyd, fullhyderabad, Welcome To The Neighbourhood are trademarks of LRR Technologies (Hyderabad) Pvt Ltd. The textual, graphic, audio and audiovisual material in this site is protected by copyright law. You may not copy, distribute, or use this material except as necessary for your personal, non-commercial use. Any trademarks are the properties of their respective owners. More on Hyderabad, India. Jobs in Hyderabad.