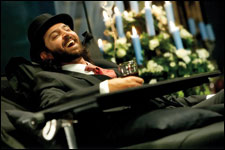 Deepa Garimella / fullhyd.com
EDITOR RATING
4.0
Performances
Script
Music/Soundtrack
Visuals
9.0
3.0
4.0
8.0
Suggestions
Can watch again
No
Good for kids
No
Good for dates
Yes
Wait to rent it
Yes
Self-indulgence and Sanjay Leela Bhansali. Sigh. Great to watch, but almost impossible to engage with nowadays. The central theme is super-solemn. The sets are from abstract nowhere-land, merging the Grimm Brothers' tales with Victorian England. The acting and the mannerisms are theatrical. The songs are unhurried verse set to equally languorous-sounding tunes. Overall, it looks like a package that ought to belong to Broadway.

And yet somehow, the man forgets he has an audience. In flesh and blood.

Guzaarish is just that - the work of an artist who talks to himself a lot. The problem isn't that it's too "exotic" or over-romantic. The result looks - and feels - like a coffee table book of poetic paintings of still-life and people in various moods. It's nice if you like that kind of thing, but the point is that you are here for a movie with live emotions, not a Flickr slide show.

The unsettling theme - mercy killing - may be blamed for the coldness that is Guzaarish, but only partly so. Black had an overwhelming soul despite the grave issue that it dealt with, and not just because of the star cast. Guzaarish lacks audience connect despite having a firecracker Hrithik Roshan as a quadriplegic, and Aishwarya Rai by his side throughout.

The movie deals with Ethan Mascarenhas (Hrithik Roshan), a brilliant magician who has been paralyzed from the neck down and has lived 14 years of his quadriplegic life with dignity. He is held in awe, love and admiration by the world around him, having released a successful motivational book and running a popular radio show of his own.

When he decides he's had enough of being a vegetable, and files an appeal to a court to let him take the euthanasia option, he rakes up a flurry of emotions in the people in his life. One of them is Sophia (Aishwarya Rai), his doting caretaker who's never once taken a day off in her 12 years of duty towards him.

Barring a few truly beautiful scenes, like the scenes at the get-together in towards the end of the movie, or the ones which have Ethan telling us why his choice to live or die is his and his alone, Guzaarish is quite a 2-dimensional experience. There are no exhilarating moments, no inspirational speeches, and very little talk of sunshine.

While it's clear that euthanasia is tricky terrain, just like suicide is, the film is clearly passionate in supporting it. It's all about a man who wants to die - and compelling though his reasons are, talking about giving life a shot is surely a far more cheerful option than discussing death.

However, somehow, there's no heartbeat in all the melodrama. A miracle, really, considering that Hrithik Rishan pulls off an explosive performance as the wisecracking, Ethan.

In fact, Aishwarya Rai is a symptom of just how not aligned Bhansali's vision and audience expectations are - she looks smothered in blindingly-gaudy make-up and incongruous clothing, and doesn't give you anything else to remember her in this movie for. She has enormous screen presence but contributes about nothing to the emotional quotient of the flick.

Then, there's Aditya, who gets to do pretty much the same stuff that he did in Action Replay. Only, it's a role that leads nowhere. Still, we're sure he'd like to embellish his resume with it.

The rest of the characters range from well-etched roles, like Shernaz Patel's (Devyani Dutta, Ethan's lawyer-friend); to fleeting appearances like that of Rajit Kapur, the vehement prosecutor.

Bhansali has composed the music himself, and, evidently, it's yet another thing that he did purely for himself. The tunes accentuate the faraway feel that the film has.

Guzaarish is not a good bet this weekend if a yawn-fest isn't on your plans.
Share. Save. Connect.
Tweet
GUZAARISH SNAPSHOT

ADVERTISEMENT
This page was tagged for
Guzaarish hindi movie
Guzaarish reviews
release date
Hrithik Roshan, Aishwarya Rai
theatres list
Follow @fullhyderabad
Follow fullhyd.com on
About Hyderabad
The Hyderabad Community
Improve fullhyd.com
More
Our Other Local Guides
Our other sites
© Copyright 1999-2009 LRR Technologies (Hyderabad), Pvt Ltd. All rights reserved. fullhyd, fullhyderabad, Welcome To The Neighbourhood are trademarks of LRR Technologies (Hyderabad) Pvt Ltd. The textual, graphic, audio and audiovisual material in this site is protected by copyright law. You may not copy, distribute, or use this material except as necessary for your personal, non-commercial use. Any trademarks are the properties of their respective owners. More on Hyderabad, India. Jobs in Hyderabad.