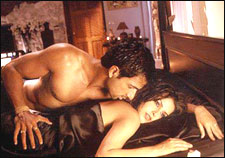 Amulya Rajan / fullhyd.com
EDITOR RATING
5.0
Performances
Script
Music/Soundtrack
Visuals
NA
NA
NA
NA
Suggestions
Can watch again
NA
Good for kids
NA
Good for dates
NA
Wait for OTT
NA
Every once in a while, Indian cinema churns out some films that are intellectual, entertaining and deserving of oodles of praise. Sheesha is not one of these.

Drowning in a pandemonium of colors (riot seems too calm a word to use here), this thriller revolves around Neha Dhupia who plays a double role. Sia (the good sister) and Ria (the bad one) are both in love with Raj (Sonu Sood), who, in turn, digs the former. Ria is deaf and dumb, and she lip-reads people to understand what they are saying to her. In fact, so perfectly that she is sometimes shown reading their lips without even facing them.

Initially, the sole reason for creating a double role might seem like one Dhupia more to expose, but as you follow the plot, it hits you that it is also to torture you with the rigmarole of the story. After eons of bloodshed, seduction and last minute twists in the tale, not to mention Ria's unrelenting struggles to force Raj to make love to her (I'm glad the 'Masculinists' haven't seen the film as yet), Ria finally falls off a roof and dies, and the other two live happily ever after. Before you begin to praise the simplicity of the plot, be warned - one cannot do 'justice' to this film in a single para. You have to watch it to believe it.

Neha Dhupia has done a fairly good job in enacting the two opposite characters. She can sometimes even give the impression of two completely different actresses playing the two contradictory roles. But her performance is smothered by the cacophany of the music, the exaggerated sets (her house gives the impression of one of those resorts in Kerala) and her non-existent costumes. So if you do manage to take your eyes off her 'bounty' and put all your energy into concentrating solely on her acting skills, you can perhaps catch her at work.

Also, be prepared to keep from falling right off your seat in laughter, least of all due to the humor contained in the film. For, other than the director's numerous, unintentional spoofs, if you do recognize anything even close to humor in this film, you can safely call yourself bored out of your mind with life. As for the background music, Lamba would have been more than eager to use it for its many worthy films.

In a nutshell, any time is a good time to run out of this movie.
Share. Save. Connect.
Tweet
SHEESHA SNAPSHOT

good review for a bad movie

Doesnt do justice to a classic movie like Sheesha

ADVERTISEMENT
This page was tagged for
Neha dhupia kiss julie
Sheesha movie 2021 review
neha bold scene sheesha
sheesha movie raj and ria sex scene
Sheesha hindi movie
Follow @fullhyderabad
Follow fullhyd.com on
About Hyderabad
The Hyderabad Community
Improve fullhyd.com
More
Our Other Local Guides
Our other sites
© Copyright 1999-2009 LRR Technologies (Hyderabad), Pvt Ltd. All rights reserved. fullhyd, fullhyderabad, Welcome To The Neighbourhood are trademarks of LRR Technologies (Hyderabad) Pvt Ltd. The textual, graphic, audio and audiovisual material in this site is protected by copyright law. You may not copy, distribute, or use this material except as necessary for your personal, non-commercial use. Any trademarks are the properties of their respective owners. More on Hyderabad, India. Jobs in Hyderabad.