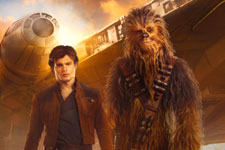 T J Reddy / fullhyd.com
EDITOR RATING
6.0
Performances
Script
Music/Soundtrack
Visuals
6.0
5.0
7.0
7.0
Suggestions
Can watch again
No
Good for kids
Yes
Good for dates
Yes
Wait for OTT
Yes
No matter what happens with the Han Solo "solo" spin-off movie, it will never be as bad as The Star Wars Christmas Special. That statement is objectively true, and if you know what we are talking about you are giggling to yourself as you read this. After the giggling dies down, however, we want you to ask yourself: Is this the bar for a Star Wars movie now? Does NOT being the Christmas special and having the name Star Wars slapped on it make a film passable in our eyes?

Before we make an attempt at answering those questions and manoeuvring the minefield of criticism with the grace and poise of Solo himself, the plot. Solo: A Star Wars Story follows the life and times of young Han (Alden Ehrenreich), sans his last name and cynicism, before the events of A New Hope. He and his motley crew of inter-galactic thieves comprised of Qi'ra (Emilia Clarke), Tobias Beckett (Woody Harrelson), Lando Calrissian (Donald Glover) and Chewbacca (Joonas Suotamo) attempt to steal a massive reserve of coaxium (a high-grade fuel) in an effort to earn themselves a large sum of money and freedom.

As many of us who watched Rogue One may have come to realise, the Star Wars spin-off projects have two specific aims. Fan service, and justifying the original trilogy's plot holes that no one, except a vocal corner of the internet, really cared about. Solo is no different.

The film has fan service out the wazoo as it traces back the origins of Han coming into possession of Millennium Falcon, the origins of his friendship with Chewbacca and Lando, and the origin of his signature catchphrases. Simultaneously, the film addresses long standing nitpicks such as "Han shooting first", "Lando's weird pronunciation of Han's name" and so forth. But what the film doesn't address is the origin of its lead character's cynical and rogue-ish ways. By not including this one key element, the movie, while satisfying the fans of the franchise by handing them the dopamine rush they so feverishly crave, also eases itself into what we call the Barney Stinson conundrum.

By cracking open every single facet of Han Solo's character (except for the important one), the movie robs him of his mystique while simultaneously smothering the likable traits of a character Lucasfilm, as a company, deemed worthy of a stand-alone film. Fans of How I Met Your Mother were aghast when they learnt the facts about Barney Stinson's private life. Gone was the charming, womanizing, comedic rogue that evolved from a broken home and an even more broken heart, and in came a man living in the past whose singular goal seemed to be getting one over on a guy who stole his first girlfriend.

Solo suffers from some of the issues mentioned in above simply because this "multi-million-dollar Hollywood film" suffers from the same setbacks that ail a "multi-crore rupee Bollywood film". It wants to be too many things at once and hence focuses on nothing in particular. As last week's Deadpool sequel showed us, unironic love stories or good guys don't play as well as they used to simply because humans in every age bracket are privy to the fact that white-meat, milk-fed, upstanding citizens hide away in indie corners of the cinematic landscape with Newton.

An audience lives vicariously through Han Solo simply because he is the embodiment of everything most of them want to be but can't due to circumstances in and out of their control. While there are snippets of this legendary character from time to time, the character and his poorly-paced journey as a whole are nowhere near the one that had him deemed the 14th best hero of all time by the AFI.

Alden Ehrenreich and the rest of the cast try to make the best of this tumultuous situation. While he is no Harrison Ford, he is just charming, likeable and relatable enough to make you care about his journey. The movie offers hands him a handful of small yet powerful character moments that show the burgeoning Han Solo hidden behind those wide, wonder-filled eyes. These moments and them alone offer the character a sense of forward motion and impetus, and bridge him to the character who shoots Greedo first in the near future. Lord knows this film needed more of them, but looters can't be choosers, we guess.

Childish Gambino's (Donald Glover) presence elevates almost any project he is a part of, and this one is no different. Glover's seamless transition between multiple emotional states and the adequate amount of justification offered for those transitions make him endlessly compelling. His acting as a foil makes his annoying cybernetic sidekick tolerable.

Emilia Clarke is busy proving that Daenerys Targaryen (the haver of many titles) is her genuine claim to fame as she blends in with Woody Harrelson as a duo of two-dimensional characters who are inserted to essay some specific roles that will soon be forgotten by both the franchise and the audience.

Pay close attention to this phenomenon. The older characters are still wholly welcome whereas the newer ones lack that added dimension that makes a character timeless. This is not isolated to the characters. The music and visual aesthetic of the film are the same. The film is packed with score from end to end, but not all of it is apt or memorable. The reused and reworked versions of John Williams' original material makes for a good auditory experience, but his namesake's new material is spotty.

The movie, as a whole, lacks the visual splendour a space opera usually possesses as it plays it safe with a host of grey and dark settings. Grandiose set and character design are lost under the sea of settings that are tonally out of touch with the movie's narrative flourish.

Could this be attributed to the fact that the film's original directing duo of Phil Lord and Christopher Miller were booted off the project after disagreements with franchise shepherd Lawrence Kasdan? Possibly. A bevy of fresh ideas from today's most promising comedy filmmakers could have added the fuel this film needed to blast off into lightspeed, but what it has is safe and reliable Ron Howard. Like present day Clint Eastwood or Jon Favreau, Ron Howard is a workman-like director. His films will never be bad per se, but they never aspire for something greater than the tried and tested.

There is something to be said when the movie's centrepiece is the infamous Kessel Run, a mythical feat of piloting that only Han Solo could achieve. While this sequence is exceptional, it is another reminder that the Star Wars spin-offs are standing on the shoulders of giants and calling themselves profitable.

The most pressing question one may need to ask while walking out of the theatre is, "What does this film add to the Star Wars mythos as a whole?" The answer, for the first time since the prequels, may not be unanimously positive.
Share. Save. Connect.
Tweet
SOLO: A STAR WARS... SNAPSHOT
SOLO: A STAR WARS STORY SNAPSHOT 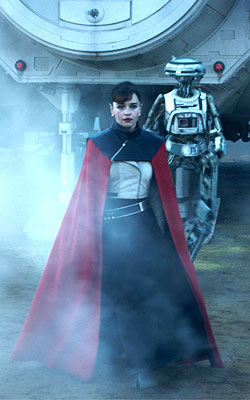 ADVERTISEMENT
This page was tagged for
Solo: A Star Wars Story english movie
Solo: A Star Wars Story reviews
release date
Alden Ehrenreich, Woody Harrelson
theatres list
Follow @fullhyderabad
Follow fullhyd.com on
About Hyderabad
The Hyderabad Community
Improve fullhyd.com
More
Our Other Local Guides
Our other sites
© Copyright 1999-2009 LRR Technologies (Hyderabad), Pvt Ltd. All rights reserved. fullhyd, fullhyderabad, Welcome To The Neighbourhood are trademarks of LRR Technologies (Hyderabad) Pvt Ltd. The textual, graphic, audio and audiovisual material in this site is protected by copyright law. You may not copy, distribute, or use this material except as necessary for your personal, non-commercial use. Any trademarks are the properties of their respective owners. More on Hyderabad, India. Jobs in Hyderabad.