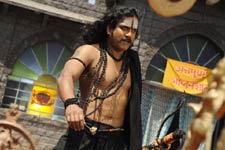 Ravi Kandala / fullhyd.com
EDITOR RATING
3.0
Performances
Script
Music/Soundtrack
Visuals
3.0
5.0
5.0
1.0
Suggestions
Can watch again
No
Good for kids
No
Good for dates
No
Wait to rent it
No
There is a reason why a director is called the captain of the ship. His job is to unite the skills of all the technicians involved in the project, and to ensure that the hard work of each of the technicians results in a superior product that does justice to their skills. And it is not an easy job to become a director. You could be involved in any of the 64 crafts required for cinema for the longest time, and still find making the transition to a director incredibly difficult.

Sri Jagadguru Adi Shankara is a film that is stuck due to its director. J K Bharavi, the man who provided the script for devotional hits like Annamayya and Sri Ramadasu, takes the big leap to direction with this movie. He obviously did tremendous research for the project, but the end result is a hotch-potch that leaves the audience confused and disillusioned.

The film chronicles the life and times of Sri Jagadguru Adi Shankara (Kaushik), the preacher who popularized the philosophy of Advaita across India. He is helped in his journey by various people, including a sage (Mohan Babu) who donates years from his own life, the god of fire (Tanikella Bharani) who teaches him Sri Chakropasana, a Chandala (Nagarjuna) who teaches him about the body and the soul, and several others. The plot is about how Adi Shankara writes several books and spreads the philosophy of Advaita in India before he leaves his body at the young age of 32.

Advaita is an incredibly huge philosophy, one that confounds scholars, saints and commoners alike. To convey it in a movie is a seemingly impossible task. Bharavi's narration of the storyline is hardly coherent, and he fails in both his objectives - the first being familiarizing people with the saint's life, and the second being familiarizing people with his philosophy.

The drama is filled with too many characters making special appearances and returning with minute roles. Kaushik, the lead actor, alternates between haughty and saintly, and fails to portray the spiritual aura required of his role.

Nagarjuna plays his 2-minute role with aplomb, and Sai Kumar also does justice to his 10-minute appearance. Indian Idol Sri Rama Chandra needs the rough equivalent of around ten thousand years to emerge into a semblance of an actor. He should stick to singing, frankly.

The music serves the purpose, but is again steeped in philosophy and symbolism that the common audience can hardly understand.

The intention is noble, but it is the impact that matters - and here, the impact is less than nil. We definitely emerged out of the film with no idea of what Advaita is and how Adi Sankara spread it around India. Go if you think you will fare better, or if you want to see Nagarjuna morph into Chiranjeevi in his Manjunatha avatar!
Share. Save. Connect.
Tweet
SRI JAGADGURU ADI SHANKARA SNAPSHOT 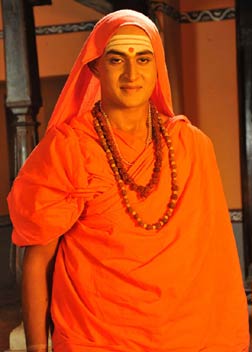 ADVERTISEMENT
This page was tagged for
Sri Jagadguru Adi Shankara telugu movie
Sri Jagadguru Adi Shankara reviews
release date
Kaushik Babu, Akkineni Nagarjuna
theatres list
Follow @fullhyderabad
Follow fullhyd.com on
About Hyderabad
The Hyderabad Community
Improve fullhyd.com
More
Our Other Local Guides
Our other sites
© Copyright 1999-2009 LRR Technologies (Hyderabad), Pvt Ltd. All rights reserved. fullhyd, fullhyderabad, Welcome To The Neighbourhood are trademarks of LRR Technologies (Hyderabad) Pvt Ltd. The textual, graphic, audio and audiovisual material in this site is protected by copyright law. You may not copy, distribute, or use this material except as necessary for your personal, non-commercial use. Any trademarks are the properties of their respective owners. More on Hyderabad, India. Jobs in Hyderabad.