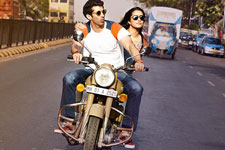 Ajay Kumar R / fullhyd.com
EDITOR RATING
5.5
Performances
Script
Music/Soundtrack
Visuals
6.0
4.0
7.0
7.0
Suggestions
Can watch again
No
Good for kids
No
Good for dates
Yes
Wait for OTT
No
Remaking a widely popular and adored movie can be a gamble at times. Translating the ardour, impact and energy of the original can be quite challenging. But such a feat isn't new to Mani Ratnam or Shaad Ali, who have to their credit Saathiya (a redux of Kollywood movie Alaipayuthey) - a hit all across India. And the most noteworthy part is that its leads - Vivek Oberoi and Rani Mukherjee - made the film feel original with their chemistry and performances.

And so Shaad Ali and Ratnam reunite to reprise their blockbuster Tamil romantic drama O Kadhal Kanmani (the Nithya Menon and Dulquer Salmaan starrer) in Hindi. Only, this time the duo do not seem in that same touch.

This version of the original revisits commitment-phobia embodied by the live-in couple of Tara (an architect) and Adi (a game developer), played by an inconsistent Shraddha Kapoor and a clueless Aditya Kapur who acts like he just found the stage. In a spate of poor dialogues with too many loose ends and bad flow, and some really fun and adorable exchanges, they get into a relationship and move in together to Adi's room, which he has rented in the house of Gopi Srivastava (executed by Naseeruddin Shah's trademark mien) and Charu (an Alzheimer's patient played brilliantly by Leela Samson).

Although afraid of commitment, Tara and Adi are a typical lovey-dovey duo (the irksome "ok, jaanu" types), and as time passes, are influenced by the loving and caring bond between Srivastava and Charu. They realize that that husband-wife pair have everything they ever wanted in married lives.

However there is a complication. Before entering the relationship, they agree to restrict it to a fling. To add to the issue, they are soon to go their separate ways as their careers come calling. It is now up to the commitment-wary couple to figure out their priorities.

Ok Jaanu may be one of the Ali-Ratnam ensemble's weaker remakes, with the screenplay lacking the depth of the original movie. The film does have several fun and lovable scenes that make you feel warm and fuzzy and giggly, but the makers do not knit these moments aptly. The plot also has its fair share of events that cannot stand to any logical scrutiny. And the "problems" encountered by the young couple aren't compelling enough to pass off as serious relationship issues to ponder over. In addition, the chemistry from their Aashiqui 2 days is nowhere to be found throughout this film.

Music director A R Rahman (shockingly) shatters the expectations we all had on the much-hyped Humma Humma song remake - the new version lacks the beats and rhythms of the original. Kapoor and Kapur ruin the show further with their embarrassing honeymoon-bed dance number which is neither fun nor sensual. Their shenanigans during the song make drunk teenagers dancing to folk riffs at weddings appear talented.

On the positive side, Shraddha Kapoor is certainly improving as an actress, though Aditya has done better. They could have done with more natural dialogues. Naseeruddin Shah's and Leela Samson's characters' bond makes you tearful as well as hopeful. A few other supporting actors, including Vijayant Kohli who plays Adi's brother, and Sarika Singh who plays Adi's sister-in-law, perform brilliantly despite having short screentime.

Among the better parts of the film are the production values. The settings, cinematography (Ravi K Chandran) and soundtrack are all just so. And while Humma Humma is lacklustre, Rahman's music in the other songs is soothing and scintillating.

Ok Jaanu is still probably worth a watch, and excellent for dates. It might make the average moviegoer recollect memories from their own life, for at least its run time.
Share. Save. Connect.
Tweet
OK JAANU SNAPSHOT 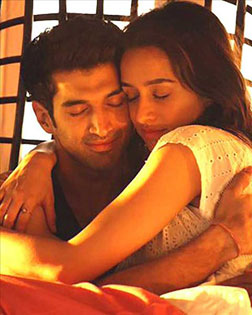 ADVERTISEMENT
This page was tagged for
OK Jaanu hindi movie
OK Jaanu reviews
release date
Shraddha Kapoor, Aditya Roy Kapur
theatres list
Follow @fullhyderabad
Follow fullhyd.com on
About Hyderabad
The Hyderabad Community
Improve fullhyd.com
More
Our Other Local Guides
Our other sites
© Copyright 1999-2009 LRR Technologies (Hyderabad), Pvt Ltd. All rights reserved. fullhyd, fullhyderabad, Welcome To The Neighbourhood are trademarks of LRR Technologies (Hyderabad) Pvt Ltd. The textual, graphic, audio and audiovisual material in this site is protected by copyright law. You may not copy, distribute, or use this material except as necessary for your personal, non-commercial use. Any trademarks are the properties of their respective owners. More on Hyderabad, India. Jobs in Hyderabad.