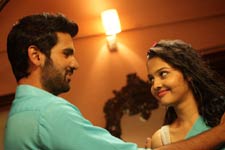 Josh / fullhyd.com
EDITOR RATING
3.5
Performances
Script
Music/Soundtrack
Visuals
5.0
3.0
4.0
5.0
Suggestions
Can watch again
No
Good for kids
No
Good for dates
No
Wait to rent it
Yes
Read the question carefully and choose the correct answer:

Q. Your elder brother is murdered by your girlfriend's elder brother (who has murdered their father, too). The maniac is now after your life, too. You yourself escape him thanks to your brother's wife and a very loyal henchman, and flee to a remote place. You now do not know how your sister-in-law and the henchman are. What do you do?

a. You grieve for your brother and worry for the only relative you now have left
b. You seek therapy due to the trauma
c. You fight and break up with your girlfriend because her brother is ruining your life at the moment
d. You indulge in a sprightly duet in scenic locales with your girlfriend, performing risque desi dance steps

Several such unbelievably careless choices abound in Basti, pretty much defining the film, and resulting in a rather interesting build-up and character development ending up in bathos in the last hour. It's a pity, since producer and director Vasu Mantena shows promise.

The plot is itself quite basic. Ammiraju and Bhavani play the two most powerful people in an area referred to as Basti, and are usually at loggerheads with each other. While Ammiraju (Mukesh Rishi) mends his ways and keeps away from the conflict, Bhavani (Abhimanyu Singh) continues to instigate Ammiraju and provoke him with ruthless activities. After a particularly horrendous incident, Ammiraju decides to kidnap Shravanthi, Bhavani's sister, just to put Bhavani in his place.

She is housed in his own place, and this leads to his younger brother Vijay and Sravanthi striking long conversations and love blossomming. The rest of the story, as you've seen in hundreds of other films before Basti, is about the couple fighting all odds to stay together.

Amidst all this, the director finds time to squeeze in ineffective comic interludes about the supposedly masculine characteristics of Snigdha. While you'd admire her for being game to such mockery of her personality, you'd also wish it didn't have to be unfunny tripe. There's a long and completely flat stretch with Ali as the creator Brahma who apparently is so overworked that he creates mixed races and transgenders as errors in his work. And all of this nonsense happens in the middle of an actually engaging plot.

The first half of Basti is pretty good. Vasu Mantena's writing and direction is replete with interesting choices, and he has a flair for impactful visuals. For instance, Mukesh Rishi and his wife are a married couple very much in love. You are shown this by means of a post-coital cuddle. There's nothing vulgar or inappropriate about a married couple being intimate that way, but you'd almost never see such a visual in a Telugu film. As another example, the body of a rape and murder victim isn't shown directly. What you see are the reactions of the people who discover the corpse.

All of these choices and substantial character development add a lot of texture to the narrative. But texture alone is not going to carry a movie on its shoulders. Basti falters and flounders very badly in the later parts, and never lives up to its promise of the first half.

You can catch this one on TV on a Sunday afternoon as you settle for your afternoon siesta. But make sure you drop off before the movie does.
Share. Save. Connect.
Tweet
BASTHI SNAPSHOT 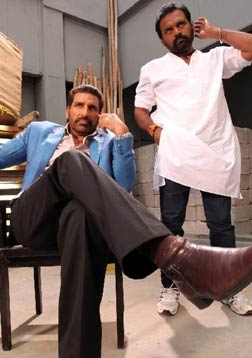 ADVERTISEMENT
This page was tagged for
Basthi telugu movie
Basthi reviews
release date
Sreyan Kapoor, Pragati
theatres list
Follow @fullhyderabad
Follow fullhyd.com on
About Hyderabad
The Hyderabad Community
Improve fullhyd.com
More
Our Other Local Guides
Our other sites
© Copyright 1999-2009 LRR Technologies (Hyderabad), Pvt Ltd. All rights reserved. fullhyd, fullhyderabad, Welcome To The Neighbourhood are trademarks of LRR Technologies (Hyderabad) Pvt Ltd. The textual, graphic, audio and audiovisual material in this site is protected by copyright law. You may not copy, distribute, or use this material except as necessary for your personal, non-commercial use. Any trademarks are the properties of their respective owners. More on Hyderabad, India. Jobs in Hyderabad.