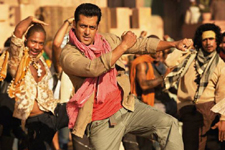 Kritika Deval / fullhyd.com
EDITOR RATING
7.5
Performances
Script
Music/Soundtrack
Visuals
8.0
6.0
6.0
7.0
Suggestions
Can watch again
Yes
Good for kids
Yes
Good for dates
Yes
Wait for OTT
No
Need a reason to believe in God? Learn from Salman. For the past three years, every one of his Ramzan releases - including Wanted and Dabangg - has pretty much ruled the BO. And we have good reason to believe that Ek Tha Tiger will surely make the cut. And the reason would be... well, it's a long story.

Once upon a time, there was an ass-kicking, ball-busting, ISI-exterminating RAW spy, called Tiger (Salman Khan), who was posted in Iraq to do what he does best. What are RAW and ISI, you ask us? Shhhh... not so loud. It's a secret. So secret that even when these people uproot entire towns, it never gets out.

Back in India after his mission, he's itching to go back to the field. What he ends up with, though, is a kitty-cat of a mission. "No killing," says superior to Tiger, "just observe." Apparently, a mad-professor stereotype of a scientist (Roshan Seth), who now teaches in Dublin, has been leaking information about an anti-missile system that he helped create.

So gun-toting Tiger has to put away his claws, fly down to Dublin, and keep an eye on the good scientist. Enter Zoya (Katrina Kaif), the professor's housekeeper and a dance student. She helps him out with an appointment, and he promptly falls in love with her.

Much coochie-cooing happens in the idyllic settings of Dublin, so much so that you're just waiting for them to get to the inevitable big interval-wala twist. And although the portrayal of that twist is a bit of a let-down, things get pretty exciting post-interval.

The movie has been marketed as an out-and-out spy flick. That could be a bit misleading, as the romance is as important as, if not more important than, the action. And the espionage angle is nothing more than a rather pale backdrop that you notice once in a while when people start throwing around words like RAW, ISI and information.

Despite a few yawn-worthy moments here and there, the chase sequences, more than a few LOL lines, Salman's cool-as-a-cucumber spy act - all in slickly executed settings - make Ek Tha Tiger one helluvan entertainer.

As far as Katrina is concerned, holy sizzling hell, the woman's hotness during fight scenes can shatter thermometers. Proving once and for all that she can be much more than just an astonishingly pretty face, she manages to pull off a multi-faceted role with a surprising competence.

The music includes numbers like Mashallah and several others which are already making their presence felt in the Indian music scene. The locations and the cinematography deserve a special mention - Iraq, Dublin, Cuba, Delhi, Italy, and all the other locations used have been shot in such a way that the local flavor is used to the optimal level.

A movie under the all encompassing Yash Raj banner and starring Salman Khan is the stuff of legends. And Ek Tha Tiger, despite its rather run-of-the-mill story, definitely lives up to its promise.
Share. Save. Connect.
Tweet
EK THA TIGER SNAPSHOT 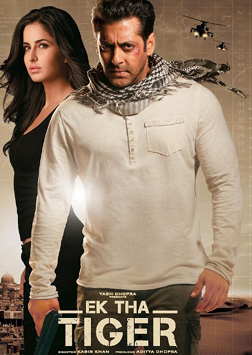 See Ek Tha Tiger full details
TOP COMMENT
Nelli on 16th Aug 2012, 3:44pm | Permalink
Shame on you Kritika Deval for being a sell out. Horrible movie with no logic.
10
2
EK THA TIGER USER REVIEWS
1 - 7 OF 7 COMMENTS
POSITIVE  |  NEGATIVE |  NEWEST  |  OLDEST  |  MOST HELPFUL  |  LEAST HELPFUL
USER RATING
2.5
2 USERS
Performances
Script
Music/Soundtrack
Visuals
1.0
3.0
6.0
7.0
Can watch again - No
Good for kids - No
Good for dates - No
Wait for OTT - No
Akash dwivedi on 4th Sep 2012, 6:37pm | Permalink
No doubt, the reviewer was paid good to write all the nonsense. I could sit there for the whole time, the movie lacked plot, acting (not if you like salman) and sense.
If people like salman so much, why don't they watch his old movies again and again. He does the same thing in every movie: stupid acting, chinese action scenes and cracking silly jokes. Of course, those who thought Wanted, Ready, Bodyguard were good movies, would like it too, as it is yet another rubbish.
Not far are the days when Salman would film himself shitting in toilet and people would go to theatres to watch it.
reviewer on 30th Aug 2012, 3:44pm | Permalink
Worth watching it for Katrina Kaif.. he acting and action sequences seemed flawless. Salman, well !!! at this age he looks like Stallone in his 60s. All in all a good bollywood action flick.
Gkon on 19th Aug 2012, 9:40pm | Permalink
Whether the reviewer at fullhyd was either sold to the producers or sold to mediocrity. and both of them are not good for fullhyd. coming to the movie itself,

1. In my observation, the film is funded jointly by Ireland, Cuba and Turkey. Amidst gloom of economic recession, they need producers like these who can make dumb movies with popular actors to generate Ad films for those countries. This film is a mere example of such heist pulled over poor audience like us.

2. Salman is either using heavy doses of some kind of medication or there is something terribly wrong with the chemistry between the lead pair. He just looks like piece of wood. No point in talking about the lead actress.

3. Girish Karnad is wasted. Sorry for him. But with in his limitations of role, he excelled in the initial dialogues with Salman at his flat while making dal and fixing his drink.

4. As I said, since this is an Ad film for those countries, one can not exactly blame for the lack of plot. Producers and Directors must be laughing now.

5. My investment in the movie was recovered through visuals of Zacho, Iraq and Hagia Sofia in Istanbul. I have seen the later monument with my own eyes and its a beautiful piece of architecture. And 2 marks for that.
Nelli on 16th Aug 2012, 3:44pm | Permalink
Shame on you Kritika Deval for being a sell out. Horrible movie with no logic.
degenerate mutant on 16th Aug 2012, 5:26pm | Permalink
It's naive to think that movies with logic make for box-office winners. Movies that offer a decent overall experience - or at least a better overall experience than those offered by other movies screening at that time - make for hits.

A reviewer's job is to tell people how much they will enjoy a movie at that point in time, given all other options - not to benchmark every movie against Mother India or Black.

Star power automatically enhances the watchability of a film, and so even an average movie with big stars becomes a movie-going experience. A Salman Khan movie today need not be outstanding to be a treat - for most people in Hyderabad, a Salman Khan movie is a treat in itself. And this is a Hyderabad-centric website.

Anyway, where the rubber meets the road is the box-office. Let's see if the collections match the rating given here before criticizing the writer.
2power10 on 16th Aug 2012, 4:46pm | Permalink
Yeah right - if you don't agree with someone's point of view, just insult him/her. Why would liking Ek Tha Tiger mean someone is a sellout? The movie has had good reviews all over except from self-professed intellectuals.
sukhwindersandy on 16th Aug 2012, 3:02pm | Permalink
With Salman Khan having on the screen, it was without any doubt that the film is a super entertainment dosage, and with so much of expectations, thankfully it served its purpose and fulfilled the hopes and beliefs of the 'Aam Janta - The Mango People'. It
Aswattha on 15th Aug 2012, 6:41pm | Permalink
I started reading reviews in Full Hyderabad because i got irritated by all the paid reviews that other websites were publishing & still are publishing.
Sad to see that Yash Raj films are able to buy the reviewer in Full Hyderabad also.
If this is not a paid review and the reviewer gave it 7.5 points then i can only assume that probably me & the reviewer watched different versions of the same movie with me watching the lousy version & the reviewer the interesting version.
At best it deserves 4 points & that too for locations, Salman & Katrina.
A big let down as far as story & screen play & dialogues are concerned.
JC on 16th Aug 2012, 5:40pm | Permalink
Am sorry, but just because YOU found the movie BORING, doesn't mean it has to be boring. The reviewer has put her/his view, whether you like it or not.

Don't blame it of paid review if you don't have enough evidence.

If you can call this a paid review, others too can say that you are writing a paid comment financed by fans/clubs who hate Salman.

If you can, others can too. It is easy to blame.
Raja on 16th Aug 2012, 2:11pm | Permalink
Aswattha... U echoed my feelings. Everyone is giving a paid review for "Ek Tha Tiger" and fullhyderabad also stands to it. Where has gone the glorious days of unbiased reviews??!!

ADVERTISEMENT
This page was tagged for
ek tha tiger in hindi
3 movie ek tha tiger
Ek Tha Tiger hindi movie
Ek Tha Tiger reviews
release date
Follow @fullhyderabad
Follow fullhyd.com on
About Hyderabad
The Hyderabad Community
Improve fullhyd.com
More
Our Other Local Guides
Our other sites
© Copyright 1999-2009 LRR Technologies (Hyderabad), Pvt Ltd. All rights reserved. fullhyd, fullhyderabad, Welcome To The Neighbourhood are trademarks of LRR Technologies (Hyderabad) Pvt Ltd. The textual, graphic, audio and audiovisual material in this site is protected by copyright law. You may not copy, distribute, or use this material except as necessary for your personal, non-commercial use. Any trademarks are the properties of their respective owners. More on Hyderabad, India. Jobs in Hyderabad.