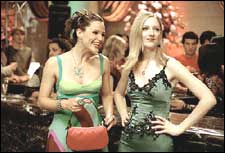 Rohit Murari / fullhyd.com
EDITOR RATING
5.0
Performances
Script
Music/Soundtrack
Visuals
NA
NA
NA
NA
Suggestions
Can watch again
NA
Good for kids
NA
Good for dates
NA
Wait for OTT
NA
Some things never change. Hollywood's penchant for chick flicks, for example. Some things do change. And, you will find none of them in this movie, for example.

Jenna (no, not Jenna Jameson) is thirteen who thinks it would be really cool to be thirty. Yeah, right. Tell that to any Indian woman and you are bound to see her turn three hundred shades of crimson before she swats you like an insignificant paramecium but not before plucking out each of your cilia with disdain.

Anyway, one day she gets her wish and is transported through a time portal, made entirely of wishing powder, into 2004. In other words, the silkworm turns into a butterfly (Jennifer Garner) without going through the murky phase of metamorphosis. She is 30, editor of a highly successful fashion magazine, has a wardrobe full of shoes and designer clothes, and is without Matt (Mark Ruffalo) - the one person she wants to be with but she does not know that yet.

Jenna's childhood friend, Lucy (Judy Greer), stabs her in the back sometime before the intermission. From then on, as we have come to expect in romantic comedies, situations conspire as the immortal Gods take a hand in the matter to turn our protagonists into a happily married couple. But, they do that without any freeway chase / airport scene. Puhlease! Call me a prude, call me non-progressive. But, give me that vital ingredient.

Jennifer Garner won the 2002 Golden Globe for her role as Sydney Bristol in Alias. Perhaps that was the moment she decided that she could keep all her acting abilities underneath the statuette on her nightstand. She is unconvincing as Jenna, the thirteen-year-old girl in the body of a thirty-year-old woman, but that is the kind of slack you cut any lead actress in a chick flick. Mark Ruffalo does his part well, of enrapturing all the women (and there were a lot of them) in the theatre.

So, go ahead and catch the movie. It might not give you one hell of a roller coaster ride but it does promise to take you on a pleasant journey. And, a word of advice. Keep your expectations minimal.
Share. Save. Connect.
Tweet
13 GOING ON 30 SNAPSHOT

ADVERTISEMENT
This page was tagged for
13 Going on 30 english movie
13 Going on 30 reviews
release date
Jennifer Garner, Matt Ruffalo
theatres list
Follow @fullhyderabad
Follow fullhyd.com on
About Hyderabad
The Hyderabad Community
Improve fullhyd.com
More
Our Other Local Guides
Our other sites
© Copyright 1999-2009 LRR Technologies (Hyderabad), Pvt Ltd. All rights reserved. fullhyd, fullhyderabad, Welcome To The Neighbourhood are trademarks of LRR Technologies (Hyderabad) Pvt Ltd. The textual, graphic, audio and audiovisual material in this site is protected by copyright law. You may not copy, distribute, or use this material except as necessary for your personal, non-commercial use. Any trademarks are the properties of their respective owners. More on Hyderabad, India. Jobs in Hyderabad.