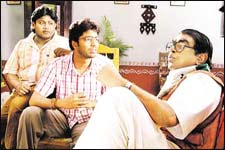 EDITOR RATING
5.0
Performances
Script
Music/Soundtrack
Visuals
NA
NA
NA
NA
Suggestions
Can watch again
NA
Good for kids
NA
Good for dates
NA
Wait for OTT
NA
There’s more to Roommates than meets the eye. That’s because what meets the eye is very little. Except if you caught some stray trailor in a B-grade theater, the film has released with lesser hype than would surround the birth of an average tadpole.

It is this that perhaps saves the film – that you are expecting nothing from it. (Of course, that presupposes the fact that you routinely go to films that you expect nothing from, in which case, please apply to us – we are looking for reviewers. Sad life and sad pay, but just ask yourself – did you get any better deal from God?) Decent performances and a dash of good comedy from the entire spectrum of Telugu comedy actors make this a tolerable weekend watch if you are in the mood to get tickled, or at least want to die trying.

Ramakrishna (Allari Naresh), Babji (Suman Shetty), Shekhar (Baladitya) and Seshu (Srinivasa Redy) are children of poor families that pledge their entire belongings (and those of some moneylenders too) to pay up Rs. 2 lacs per head to a broker Narasimha who shows them dreams of sending them to Dubai. To be on the safe-side, they don’t even check out his credentials – if they found out he’s a conster, they wouldn’t be able to go to Dubai anymore, right?

However Narasimha knows that he is a conster, so he does his duty by taking the money and vanishing. And the devastated but angry and determined foursome plan the most ambitious thing – to kill themselves on a railway track.

The train swerves just in time to miss them, but the four are caught in the act by Pallavi (Navneet Kaur), who tells them that killing themselves would only make them cowardly. The boys are confused now, since they thought that killing themselves would make them dead. With even that option foreclosed now, they accompany Pallavi to her house where she gets her landlord (Jeeva) to give them a room.

If you have ever found a dead body with its neck slit in the middle of your room, then you would know what the four would go through. If you haven’t, well, it’s okay, don’t try it – there are legal implications. You can just watch this film.

What make the film watchable are the spurts of comic interludes between, like a job interview for Naresh in the beginning where all the interviewers are stammerers (an insensitive bit nevertheless), the wife of the Special Police Officer buying underwear for him, and the hero asking a shopkeeper what condoms are used for. Okay wait, the last bit was in another movie – sorry for the confusion. But the first two are in this film, we swear.

The performances are all fine, which is surprising since they are all so low-cost. Nothing that we at fullhyd.com buy at a low cost ever seems to work, including
Share. Save. Connect.
Tweet
ROOMMATES SNAPSHOT

ADVERTISEMENT
This page was tagged for
roommates telugu movie
Roommates telugu movie
Roommates reviews
release date
Aryan Allari Naresh, Navneet Kaur
Follow @fullhyderabad
Follow fullhyd.com on
About Hyderabad
The Hyderabad Community
Improve fullhyd.com
More
Our Other Local Guides
Our other sites
© Copyright 1999-2009 LRR Technologies (Hyderabad), Pvt Ltd. All rights reserved. fullhyd, fullhyderabad, Welcome To The Neighbourhood are trademarks of LRR Technologies (Hyderabad) Pvt Ltd. The textual, graphic, audio and audiovisual material in this site is protected by copyright law. You may not copy, distribute, or use this material except as necessary for your personal, non-commercial use. Any trademarks are the properties of their respective owners. More on Hyderabad, India. Jobs in Hyderabad.