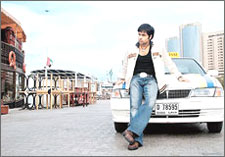 EDITOR RATING
5.0
Performances
Script
Music/Soundtrack
Visuals
NA
NA
NA
NA
Suggestions
Can watch again
NA
Good for kids
NA
Good for dates
NA
Wait for OTT
NA
It’s no secret – the fact that The Killer is a remake of Collateral, the 2004 film starring Tom Cruise and Jamie Foxx, is acknowledged by the directors of this one themselves. They should have been as honest to themselves about their choice of lead actor too. Jamie Foxx is an Oscar winner, and won a nomination for his role in Collateral too. The only way Emraan Hashmi is ever likely to win an Oscar is if they were awarded on a first-come-first-served basis.

Aside of a disastrous choice of a lead actor for a film that revolves primarily around performances, The Killer suffers from other problems as well. For starters, the plot is too non-Bollywood. There is no role for a heroine, making this a film like Taxi 9 2 11 or Ajnabee – for niche, urban, multiplex audiences. Then, there is not much in terms of comedy. And finally, there are no big names in the cast. There are practically no Hindi films that have become hits in India in ages without any of these these three elements.

Then, people go to an Emraan Hashmi film for a purpose. And here he doesn’t, er, meet expectations. All you are left with then is his acting. It is like switching on FTV to watch the clothes.

Nikhil (Emraan Hashmi) is a night-time cab-driver in Dubai, and falls in love with a nightclub-dancer Riya (Nisha Kothari), who takes his cab each night. This period of brief romance lasts about 20 minutes in the beginning, and is as mushy as a DSL modem. Then, Vikram (Irfaan Khan) hails Nikhil’s cab, and strikes up a lively conversation with all the banter that film villians seem to be able to nudge out of their bad side.

Yes, Vikram is a contract killer, and has 5 murders scheduled for the night – 5 people who are planning to testify against a big underworld don and who has hired Vikram to exterminate them. He engages Nikhil for all the night, but after his second killing, the body lands on the bonnet of the cab from a highrise’s window, and Nikhil realizes who Vikram is. It’s too late, though, since Vikram will not let him go now.

Nikhil is scared, but as the night progresses and he sees a good man shot in front of his eyes, and then his own friend, a petrol pump attendant, turning collateral damage, a kind of recklessness sets in, and he starts to slowly take the killer on.

There’s not much to speak in appraisal of a film which is just a rip-off of a highly successful Hollywood blockbuster (Jamie Foxx and Tom Cruise won several awards for it). Irfaan Khan is impressive, and some lines are well-written, but the lines are mostly out of the original. The movie doesn’t really bore you anywhere, but then it has only 2 primary characters who occupy 90% of screen-time, and one of them can’t act, which will not help make this a blockbuster.

The film is likely to have just a nominal run in India, and much lesser in Hyderabad where Hindi films anyway run for lesser periods than in the West and the North. Like we said, this one won’t bore you, but you are unlikely to recommend it.
Share. Save. Connect.
Tweet
THE KILLER SNAPSHOT

See The Killer full details
THE KILLER USER REVIEWS
1 - 6 OF 6 COMMENTS
POSITIVE  |  NEGATIVE |  NEWEST  |  OLDEST  |  MOST HELPFUL  |  LEAST HELPFUL
USER RATING
5.4
23 USERS
Performances
Script
Music/Soundtrack
Visuals
NA
NA
NA
NA
Can watch again - NA
Good for kids - NA
Good for dates - NA
Wait for OTT - NA
Rahul Kavuri on 2nd Aug 2006, 9:19pm | Permalink
Hey neelam, U seem to have taken my remarks seriously, U said that Emraan has created a niche for himself, what kind of niche are u talking about, about the niche who want to watch Kissing scenes in the film can definitely go for his movie

If u see the other viewers review they too rate him just like me, dont take my remarks personally

RATING
4
Vinod Kanchibotla on 29th Jul 2006, 11:35am | Permalink
Is bollywood meand emraan &Himesh . This movie is such a crap that ashok was 10 times better.
RATING
2
Ranga Bored on 29th Jul 2006, 5:43am | Permalink
First of all, free-making Collateral is a stupid idea. Putting Emraan in it just to suck up to the global or niche Indian audiences (who have the ability see one and only one thing in movies...style) is another mistake. Emraan is a successful actor....his audience are crack heads and cocaine addicts. Irfan is type cast YET again. This movie is a Major Hathouda. And Neelam Sharma ought to visit a shrink.
RATING
2
Neelam Sharma on 28th Jul 2006, 5:46pm | Permalink
emraan is now a rage in india and abroad. frankly rahul kavuri and swathi you should first see the box office collections of murder, zeher, aksar, gangster before you start talking gibberish - emraan has risen from 2003 in just three years, where he has created a niche for himself and is a solo hero in most of his films - he does not have any other big stars to support him in his roles. so get your facts right, before you start shooting your mouth off.
RATING
8
Rahul Kavuri on 26th Jul 2006, 4:37pm | Permalink
Please take a break Emraan, I see u atleast in 6 films a year of which 1 does good business and the rest are duds
RATING
4
Swathi on 22nd Jul 2006, 9:33am | Permalink
please stop this emraan from acting just send this guy to a acting skool.
RATING
2
LEAVE A COMMENT
fullhyd.com has 700,000+ monthly visits. Tell Hyderabad what you feel about The Killer!
MORE MOVIES
Latest Reviews
Sammathame
Jugjugg Jeeyo
Godse
Nikamma
Virata Parvam
more
Ante Sundaraniki
Janhit Mein Jaari
Jurassic World: Dominion
Jurassic World: Dominion (Te...
Jurassic World: Dominion (Hi...
Vikram
MAJOR
MAJOR (Hindi)
F3: Fun and Frustration
Anek
Contemporary Reviews
Dheerudu
Kabhi Alvida Naa Kehna
Veerabhadra
Adbhutam
Adavi Chukka
more
Aayana + Aame = 9
Munich
Click (English)
Mass - Dammunte Kasko
Shaadi Karke Phas Gaya Yaar
Sandwich
Anthony Kaun Hai?
Sri Manjunatha
Roommates
Random Reviews
First Strike
Naa Praanam Kante Ekkuva
Snakes On A Plane
Freaky Friday
Aankhen
more
Hellboy - The Golden Army (T...
Teen Patti
The Roommate
The Woman In Black
Gouravam
300: Rise Of An Empire (Telu...
Jupiter Ascending (3D)
Great Grand Masti
Balakrishnudu
Agent Sai Srinivasa Athreya
SEARCH MOVIES
Dissatisfied with the results? Report a problem or error, or add a listing.
ADVERTISEMENT
SHOUTBOX!
{{todo.name}}
{{todo.date}}
[
ip{{todo.ip}}
]
{{ todo.summary }}... expand »
{{ todo.text }} « collapse
First  |  Prev  |   1   2  3  {{current_page-1}}  {{current_page}}  {{current_page+1}}  {{last_page-2}}  {{last_page-1}}  {{last_page}}   |  Next  |  Last
{{todos[0].name}}

ADVERTISEMENT
This page was tagged for
The Killer hindi movie
The Killer reviews
release date
Emraan Hashmi, Irfaan Khan
theatres list
Follow @fullhyderabad
Follow fullhyd.com on
About Hyderabad
The Hyderabad Community
Improve fullhyd.com
More
Our Other Local Guides
Our other sites
© Copyright 1999-2009 LRR Technologies (Hyderabad), Pvt Ltd. All rights reserved. fullhyd, fullhyderabad, Welcome To The Neighbourhood are trademarks of LRR Technologies (Hyderabad) Pvt Ltd. The textual, graphic, audio and audiovisual material in this site is protected by copyright law. You may not copy, distribute, or use this material except as necessary for your personal, non-commercial use. Any trademarks are the properties of their respective owners. More on Hyderabad, India. Jobs in Hyderabad.