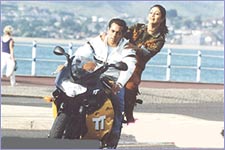 Najaf Ishrati / fullhyd.com
EDITOR RATING
5.0
Performances
Script
Music/Soundtrack
Visuals
NA
NA
NA
NA
Suggestions
Can watch again
NA
Good for kids
NA
Good for dates
NA
Wait for OTT
NA
Ever heard of the story where two monkeys fight over a piece of bread and along comes a cat which starts to weigh it and eat the excesses to balance it? The inspiration for Shaadi Karke Phas Gaya Yaar must definitely have come from there. Tit for tat. Tat for tit. Titat for Tatit. Tatit for… You get the point. Thankfully, they didn’t keep any actual cats or monkeys in the movie. They got Salman Khan, Shilpa Shetty and Supriya Karnik to play the respective roles in this truncated soap opera.

The movie takes after Kramer Vs Kramer, but only upto a point. The similarity lies in that both dedicate a lot of reel time to the post-marriage ‘sadly ever after’ scenario. After that point, it definitely becomes a masala Hindi film.

Another thing about Shaadi Karke... is that you must leave the scale with which you attach importance to events outside in the theater lobby. That a hawaldar has unquestioned access to a couple’s bedroom, and can dial up a magistrate sahiba at 6am to threaten the wife to walk her unborn baby, is completely normal. Even the thought of registering some kind of valid protest against this behaviour does not strike the wife. And this comes after she has walked out of her husband’s house because he read her diary before marriage.

But it’s a long story, and it’s best to start when the fighting monkeys were littler.

Ayaan (Salman Khan) meets Ahana (Shilpa Shetty) a couple of times before he gets hold of her diary by chance. In this diary, he reads all about her tastes, likes and dislikes, which he quickly adopts for himself.

In their meetings, she is obviously flabbergasted at the way all of their choices match. A couple of song and dance sequences happen, the chat mangni pat byaah takes place, and she moves in to Ayaan’s house. This takes half the movie.

Just when you start thinking about what you have gotten yourself into and come back after a coffee in the lobby (where you once again got a glimpse at the ‘scale’ lying where you left it in the corner), things get better. Or worse, if you choose to look at things from Ayaan’s point of view.

The fights that happen in the second half are the stuff of a gossipy neighbour’s dreams. It is here that couples watching the movie begin to take sides. However, the movie could have given its female audiences more justification for their stand. (Of course, it could just be that this sexist reviewer failed to see any). They fight about this. They fight about that. They fight about blah. They fight about bhuh. There is always curiosity to see how these people managed it. And manage it they do, as Salman Khan turns on his charm(!) on most occasions and the fight ends.

Eventually the diary gets found out, and the “unthinkable” happens - an instant separation. However, there is a problem. Ahana is pregnant again after her first miscarriage, and Ayaan’s taking no chances. An incredulous court scene follows, and Ayaan lands up at her mother’s place along with a Jaspal Bhatti-ish hawaldar, who is no other than Salman’s brother (Munish Behl).

Some incredulous scenes later the baby is born, and now it’s Ahana’s turn to land up at Salman’s place to feed the baby. Remember the incredulous court scene? Now think of another equally incredulous hospital scene which leads to this.

One of the things that stands out in the movie is Shakti Kapoor’s acting as Ahana’s hen-pecked father. He really looks the helpless husband next to his ultra-modern wife, Supriya Karnik, the main instigator throughout the movie.

Overall, Shaadi Karke… is just about a watchable movie, only so long as you don’t forget to pick up your scales at the end of the movie. Definitely explores some real-life situations, and a must-watch for all those engaged but not yet married. Those who are already married can go out there and derive sadistic pleasure out of others’ misfortunes. In Salman-crazy Hyderabad, this one should do okay.
Share. Save. Connect.
Tweet
SHAADI KARKE PHAS GAYA... SNAPSHOT
SHAADI KARKE PHAS GAYA YAAR SNAPSHOT

ADVERTISEMENT
This page was tagged for
shaadikarkephasgayayaarfullmovie
film yaar Hyderabad
Shaadi krk phas gya yaar full moviehindi
shaadi karke phas gaya yaar hindi full movie
shaadi karke phas gaya yaar full movie
Follow @fullhyderabad
Follow fullhyd.com on
About Hyderabad
The Hyderabad Community
Improve fullhyd.com
More
Our Other Local Guides
Our other sites
© Copyright 1999-2009 LRR Technologies (Hyderabad), Pvt Ltd. All rights reserved. fullhyd, fullhyderabad, Welcome To The Neighbourhood are trademarks of LRR Technologies (Hyderabad) Pvt Ltd. The textual, graphic, audio and audiovisual material in this site is protected by copyright law. You may not copy, distribute, or use this material except as necessary for your personal, non-commercial use. Any trademarks are the properties of their respective owners. More on Hyderabad, India. Jobs in Hyderabad.