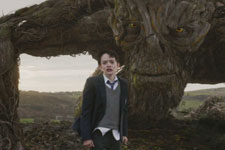 Swaroop Thotada / fullhyd.com
EDITOR RATING
7.0
Performances
Script
Music/Soundtrack
Visuals
7.0
7.0
7.0
9.0
Suggestions
Can watch again
Yes
Good for kids
No
Good for dates
Yes
Wait for OTT
No
The animation in A Monster Calls has a pleasantly peculiar charm to itself. The film features two elaborate animated anti-fairytales told by an artistic splash of water colors across the screen, to form witches, kings, princes, forests, forts, dragons, wars and stories featuring them. This expressionistic rendering of fairytale stereotypes is contrasted by plot-twists of realism which the stories are keen on arriving at, in the otherwise conventional fables. This unsubtle contrast sits well with the film's theme which is a child's rough but inevitable journey into the cold realities of the world and his struggle to cope with them.

A Monster Calls is no simple children's film. In fact it is too dark for children, but that is an observation and not criticism. The darkness is understandable because the theme it grapples with is grief. We cannot sell lived-happily-ever-after to kids forever, can we? The film focuses on this inevitability, and expects them to buckle up.

A few weeks back, we mercilessly bashed Collateral Beauty, which dealt with the same subject, for being remorselessly manipulative. So how come we are not so stringent on this movie that is no less of a blatant tearjerker? Simply put, J A Bayona, this film's director, knows how to do it. Remember how he pulled a similar feat in his heart-wrenching disaster drama The Impossible? We all are okay with being emotionally manipulated, but we want it to be done without our intelligence being insulted.

Conor O'Malley (Lewis MacDougall) lives with his mother (Felicity Jones) who is suffering from a terminal cancer. He is a loner, and is bullied and beaten all the time in school. He compensates for a lack of friends by immersing himself in drawing monsters and fairies all over his notebooks. His teachers go easy on him for they perhaps know of his tragedy.

The impending doom haunts him every night in the form of a nightmare where he loses his mother to a bottomless pit. MacDougall does a terrific job with his expressive face and his thin vulnerable frame draws our care.

One night, he is visited by a tree monster that has morphed itself from the yew tree in the graveyard nearby their house. Voiced by Liam Neeson, this CGI beast also benefits from the motion-captured Neeson's body language. This fire-breathing giant, though initially scary, is onto no mean business, and all he wants to do is tell the kid three stories, and the kid has to narrate his nightmare as his fourth.

It is not hard to guess that the giant will eventually equip the kid to confront the cold, harsh truth and become a man. It's only obvious that the monster is not real and stems from his emotional turmoil. It is not the surprises that the film can rely on, but the film does have a few. These stories that the monster narrates are no good-over-evil fairytales, but are the monster's way to acquaint the kid with grays of character and ambiguity of meaning.

These stories with occasional threadbare clichés benefit from the fact that they are narrated to a kid and thus feature overt simplicity and blatant metaphors, when they should be sophisticated enough to shoulder the philosophical subtexts of the subject. Perhaps realizing this, the director flexes his Spielberg-ian muscles while creating the monster and in showering the animation with visual splendor. Anyway, the narration surely benefits from the fertile imagination in its visual rendering. Neeson's hyper-bass voice and Fernando Velazquez's soundtrack that is always mindful of the film's deliberate melodrama lend the required warmth to this sorrowful story.

Sigourney Weaver plays the overbearing granny who eventually has to sympathize with her troublesome grandkid, and she plays it with the required staged sophistry. Toby Kebbell is good too as the benevolent yet flawed father, whose charm and maturity somewhat redeem him from the otherwise inescapable emotional turmoil. The emotional scenes are mostly shot in handheld close-ups, perhaps to contrast with the magnificence of the CGI illusions. That's clever because as the real and surreal culminate at the end, the conflict seems resolved, and the feat is all in the subtle framing.

Bayona surely has a grasp on the balance required when handling a story that weaves together visual feats and human drama. It will be interesting to see what the director can bring to the Jurassic Park franchise, about which people have their own debates on whether it should be continued.
Share. Save. Connect.
Tweet
A MONSTER CALLS SNAPSHOT 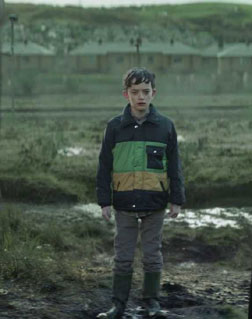 ADVERTISEMENT
This page was tagged for
A Monster Calls english movie
A Monster Calls reviews
release date
Lewis MacDougall, Sigourney Weaver
theatres list
Follow @fullhyderabad
Follow fullhyd.com on
About Hyderabad
The Hyderabad Community
Improve fullhyd.com
More
Our Other Local Guides
Our other sites
© Copyright 1999-2009 LRR Technologies (Hyderabad), Pvt Ltd. All rights reserved. fullhyd, fullhyderabad, Welcome To The Neighbourhood are trademarks of LRR Technologies (Hyderabad) Pvt Ltd. The textual, graphic, audio and audiovisual material in this site is protected by copyright law. You may not copy, distribute, or use this material except as necessary for your personal, non-commercial use. Any trademarks are the properties of their respective owners. More on Hyderabad, India. Jobs in Hyderabad.