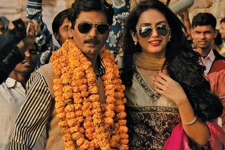 Kritika Deval / fullhyd.com
EDITOR RATING
7.5
Performances
Script
Music/Soundtrack
Visuals
9.0
7.0
9.0
8.0
Suggestions
Can watch again
No
Good for kids
No
Good for dates
Yes
Wait for OTT
No
Remember that old nursery rhyme with the lines "A-tishoo! A-tishoo! We all fall down"? Or the story of the Pied Piper who led a bunch of kids to a cave, never to be seen again? Or even the one seemingly innocuous tale of The Sleeping Beauty? All these stories stem from rather morbid beginnings. And the 6-hour-long story of Gangs Of Wasseypur has just the right kind of folklore-ishness that could end up, after much sanitization, being passed down as an old-wives' tale.

"Jo bhi wrongwa hai use set rightwa karoji", croons the protagonist's love-interest, a heroine in the truest sense of the word. And as our "hero" scrambles to do just that, Gangs Of Wasseypur sucks us down into a world where there is no right or wrong, no good or bad, only a world where the Law Of The Fish prevails.

Here's a gist of what you can look forward to in this dystopian extravaganza. A bunch of people shoot someone. The victim's family mourns and vows revenge. Then the men in the family go on a shooting spree (yipee!). Thus goeth the circle of life in GOW II, just as it did in part I. However, the difference between the two lies in the fact that while the first chapter gets done with the often tiresome storytelling, the second gets straight to the "Wham! Bam! Thank you, ma'am" part of it, i. e., the fun part.

The first of the many many triggers pulled in the movie is on Sardar Khan (Manoj Bajpayee). His son Danish takes over from there, and kills the people who shot Sardar, which again results in his own death. These are the events that lead up to our protagonist, the disinterested ganjetiFaizal (Nawazuddin Siddiqui), being shaken out of his hazy, pot-enhanced lala-land and coming into his own.

And soon enough, he has a cozy little empire of his own, with a most fascinatingly evil set of followers. As the rival gang lays off the violence to accommodate the political ambitions of their leader, Ramadhir Singh (Tigmanshu Dhulia), Faizal's own prowess in looting and murdering grows in leaps and bounds. And in between all that blood flow, he also manages to find the love of his life, the fiesty Mohsina (Huma Qureshi, gorgeous), and an unusually refreshing courtship ensues.

Soon, though, the rival gang decides that its guns and knives are getting rusty, and the color red dominates the screen for long periods of time, interrupted by funerals with Bollywood songs sung with great gusto. And on and on the "you kill - I kill" spiral goes, finally petering down to its inevitable conclusion (heck - everyone knows a 'dead man walking' when they see one).

Gangs Of Wasseypur 2 is most certainly not for the queasy-stomached. Despite the kind of relentless violence which, after a point, manages to desensitize you even to the gruesome sight of a man's head in a plastic bag, the movie still manages to be the kind that will go down in history as one of cinema's greats. The reason behind it is the mastery Anurag Kashyap shows in putting together a charismatic cast and a script that keeps your mind churning. And beneath it all is a quirky rural rawness, a sense of amorality rivaling that of Alfred P Doolittle (from Pygmalion), which captivates you, much as the song of the Sirens captivated a hapless bunch of sailors.

The best part of the movie is the amount of fun you can just tell that the cast are having. Nawazuddin Siddiqui as the pothead who's lost all touch with reality; Humna Qureshi as his spirited, coy inamorata; Richa Chaddha as the mother who eggs Faizal on to his doom; and most of the others, are characters that will stay with you. One particular character, going by the name of Perpendicular, stands out from the rest, as the young boy gleefully goes around putting the fear of God - rather, Faizal Khan - in the hearts of the good people of Wasseypur.

The soundtrack and the background score are every bit as avant-garde, offbeat, and surprising as you'd expect from an Anurag Kashyap movie, if a bit repetitive. The song "Kaala Rey" is a stroke of pure genius, and the perfect accompaniment to the twisted darkness of soul and of person that the protagonist embodies. Visually, the movie is almost flawless. Kashyap's attention to the minutest of details adds to your rich viewing experience.

Although the tale is one that can probably be told in an hour, Gangs Of Wasseypur 2 is a must-watch because you get to learn so many ways to kill people, because of music that'll definitely stick with you for weeks, and also because it has characters with names like Perpendicular, Tangent and Definite.
Share. Save. Connect.
Tweet
GANGS OF WASSEYPUR 2 SNAPSHOT 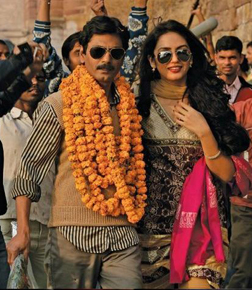 ADVERTISEMENT
This page was tagged for
hindi movies gangs of wasseypur 2
Gangs Of Wasseypur 2 hindi movie
Gangs Of Wasseypur 2 reviews
release date
Nawazuddin Siddiqui, Richa Chadda
Follow @fullhyderabad
Follow fullhyd.com on
About Hyderabad
The Hyderabad Community
Improve fullhyd.com
More
Our Other Local Guides
Our other sites
© Copyright 1999-2009 LRR Technologies (Hyderabad), Pvt Ltd. All rights reserved. fullhyd, fullhyderabad, Welcome To The Neighbourhood are trademarks of LRR Technologies (Hyderabad) Pvt Ltd. The textual, graphic, audio and audiovisual material in this site is protected by copyright law. You may not copy, distribute, or use this material except as necessary for your personal, non-commercial use. Any trademarks are the properties of their respective owners. More on Hyderabad, India. Jobs in Hyderabad.