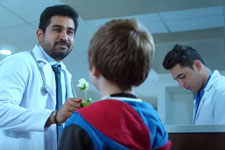 Kritika Deval / fullhyd.com
EDITOR RATING
3.0
Performances
Script
Music/Soundtrack
Visuals
4.5
3.5
3.0
4.0
Suggestions
Can watch again
No
Good for kids
No
Good for dates
No
Wait for OTT
No
This writer has many, many things to say about this film, none of which will make sense without getting the plot out of the way. So, let's.

Bharath (Vijay Antony) is an NRI kid whose mother is in urgent need of a kidney transplant. This leads to the first of many DNA tests of dubious necessity in the film, which in turn, along his recurring nightmares about a mysterious woman saving him from an ox, leads him to discover that he is actually adopted, which then leads to him travelling to India in order who find out who his birth parents are.

What, you ask, about his adoptive mother who is apparently chronically ill? Who cares when there's a mystery to be solved, is the film's answer to any number of ethical and moral concerns.

Once in India, Bharath follows a crumb trail of clues all the way to a village right out of a '90s film, armed with two names - Kaasi (his), and Parvati (his birth mother's). He sets up a clinic, because he is apparently The Top Doctor in New York, gains an ally in Gopi (Yogi Babu), a token love interest in the local healer Srivalli (Anjali), and a village full of illiterate people to practice breaking the Hippocratic Oath on.

It's around the third illicit attempt at gaining DNA information from non-consenting people that you start to wonder what kind of doctor our hero might be to be so cavalier with the consent and confidentiality of a group of people so obviously lacking in any kind of medical knowledge. You wonder at these things because otherwise you'd have to pay attention to absolutely terrible dialogue resulting from absolutely terrible dubbing. You'd also have to pay attention to the fact that you're being asked to suspend your disbelief way up while getting very little back in the way of entertainment or even engagement.

After an hour that seems like eternity broken up by way of tedious music and puerile humour, you end up with three father candidates with three tragic flashbacks, with their younger versions all rendered by a Vijay Antony being Vijay Antony, and one Big Bad played by R K Suresh who is very good at being evil. The only thing keeping you in the theatre by that point is the promise of the resolution of the mystery, which happens somewhere in the middle of the second half, and the only thing keeping this writer in the theatre beyond that was the fact that it's literally her job.

If this writer sounds rather incoherent, you can blame that entirely on unnecessarily long exposure to a total lack of sense. The best that can be said of the whole thing is that at least in the second half, things happen.

Vijay Antony is only ever Vijay Antony despite getting four entire stories to star in. His pretence at strong and silent gets old fast. Anjali, Sunaina, Amrita Ayer and Shilpa Manjunath are all lovely girls with little to do other than weep and smile and look pretty, although why they needed three female actors when Vijay Antony was enough to play three different male characters is beyond us. The only people to display any kinds of acting chops are Nasser and others of his generation, and their efforts at being competent are severely hampered by the makers' apparent assumption that dialogue is only there so characters have words to say.

The film looks picturesque if dated, and the music is little more than mistimed punctuation to a convoluted story.

Badly acted, badly written, badly executed, Kaasi has very little to offer to even the most forgiving of audiences. Definitely not entertainment worth risking a sunstroke for.
Share. Save. Connect.
Tweet
KAASI (2018) SNAPSHOT 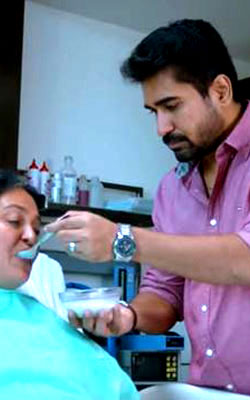 ADVERTISEMENT
This page was tagged for
Kaasi (2018) telugu movie
Kaasi (2018) reviews
release date
Vijay Antony, Anjali
theatres list
Follow @fullhyderabad
Follow fullhyd.com on
About Hyderabad
The Hyderabad Community
Improve fullhyd.com
More
Our Other Local Guides
Our other sites
© Copyright 1999-2009 LRR Technologies (Hyderabad), Pvt Ltd. All rights reserved. fullhyd, fullhyderabad, Welcome To The Neighbourhood are trademarks of LRR Technologies (Hyderabad) Pvt Ltd. The textual, graphic, audio and audiovisual material in this site is protected by copyright law. You may not copy, distribute, or use this material except as necessary for your personal, non-commercial use. Any trademarks are the properties of their respective owners. More on Hyderabad, India. Jobs in Hyderabad.