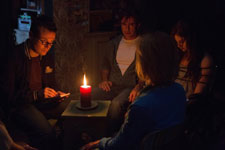 Zehra Abbas / fullhyd.com
EDITOR RATING
6.5
Performances
Script
Music/Soundtrack
Visuals
7.0
6.0
7.5
7.5
Suggestions
Can watch again
No
Good for kids
No
Good for dates
Yes
Wait for OTT
No
Insidious: Chapter 3 serves as a prequel to Insidious (2010) and Insidious: Chapter 2 (2013), and returns with a different protagonist, but the same old bag of tricks.

Pretty teenager Quinn Brenner (Stephanie Scott) struggles to come to terms with her mother's death, and attempts to contact the latter's spirit. Instead, she inadvertently makes contact with a malevolent entity that lurks in her building, and which pretends to be her mother. Quinn doesn't realize this deadly charade soon enough. However, after two sightings of a shadowy figure giving her a friendly wave - in slow motion - she starts to get scared.

A horrific accident lands her in bed with both legs broken, and the now incapacitated Quinn discovers that the shadowy figure is not friendly, and is not content to wave at her from a distance anymore. It gets up close and personal, fast, and when Quinn's father, Sean (Dermot Mulroney), realizes that his daughter's life is in danger, he approaches gifted psychic Elise (Lin Shaye) for help.

When Quinn asks pathetically "What's happening to me?", you look expectantly at her dad. Remember Josh Lambert charging into the spirit world to save his little boy in Insidious (2010)? Enter Sean. Slack-mouthed and clueless almost throughout, he is given some of the most clichéd dialogues in the film, which he spouts while Elise goes about saving his daughter. Thus, this parent-child relationship is never developed properly, and it lacks the emotional drama and poignancy of Insidious (2010) that was an important part of the first film's success.

So, the protagonist, quite clearly, is Elise. Hurrah for Lin Shaye, who is arguably the pivot of the Insidious series, and finally gets a central role, deserving of her immense talent. Watch her mobile face, and its myriad expressions flicker on and off, and you'll find yourself rooting for her. The only problem is - and not to be rude or anything - it's not exactly thrilling to watch a geriatric heroine do battle with a geriatric demon.

What's that, you say? A geriatric demon? He's old, skeletal, wears a breathing mask and hospital gown, and is called The Man Who Can't Breathe. To be fair, he's frightening in parts, and we mean that literally. A flash of his arm, an eye, and his slimy footprints are all creepy. But when you finally get to see him fully - you just want to give him your popcorn and drink because he looks so malnourished. So, no, not nearly as menacing as the Red-Faced Demon.

Despite that disappointment, you hope for an epic showdown in the climax. Actually, you'll be itching for it because the pace of the film is slow, and the first half is more demon striptease than anything else. What you do get is a rickety, asthmatic spirit finally facing his nemesis - a sweet, old lady in a mumsy cardigan. Hold on tight because what follows is a whole lot of shoving. We're not kidding. She shoves him, he shoves her. It's the elderly person equivalent of a schoolyard fight.

However, that doesn't mean that the film isn't scary enough - even the climax is redeemed by the cinematography and sound. As a matter of fact, Insidious: Chapter 3 is full of jump scares - not enough to send your toupee flying, but good fun, nevertheless. The background score by Joseph Bishara goes a long way in creating the right atmosphere, and bonus points to director Leigh Whannell for punctuating the music with long, creepy silences that end with a classic "boo".

This is complimented by skilful use of light and dark imagery, and the best example of that would be "The Further" - the terrifying spirit world. It's probably this franchise's USP and is as eerie as ever, providing Chapter 3 with some of its best moments. Still, it's time that the makers explored the concept "further", as opposed to just having characters explore its spectral corridors and rooms, film after film.

Perhaps that's the biggest problem with this movie - the lack of novelty. It is every horror film franchise's curse, and the Insidious series has succumbed to it, too. It's interesting to get to know the backstory of series regular Elise, and it's wonderful to see ghost-hunters Specs (Leigh Whannell) and Tucker (Angus Sampson) again. You actually wish there was more of the latter and their comic relief. But the makers have nothing new to offer. The end of this film hints at Chapter 4, and writer/director Whannell really needs to take a vacation first. Preferably, to a dank, old haunted castle in Scotland.

Chapter 3 will not haunt you like Insidious (2010) did, but it will entertain you sufficiently over a lazy weekend. It's not for the horror film aficionado, but for the person who enjoys waiting with bated breath for the next jump scare, clutching the arm of the person seated next to them (hopefully not a stranger), and then laughing at themselves. This one is for the gigglers, not the screamers.
Share. Save. Connect.
Tweet
INSIDIOUS: CHAPTER 3 SNAPSHOT 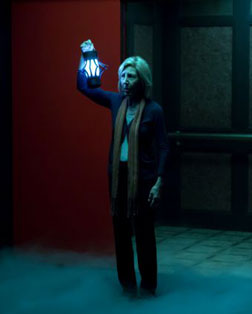 ADVERTISEMENT
This page was tagged for
Insidious: Chapter 3 english movie
Insidious: Chapter 3 reviews
release date
Dermot Mulroney, Stefanie Scott
theatres list
Follow @fullhyderabad
Follow fullhyd.com on
About Hyderabad
The Hyderabad Community
Improve fullhyd.com
More
Our Other Local Guides
Our other sites
© Copyright 1999-2009 LRR Technologies (Hyderabad), Pvt Ltd. All rights reserved. fullhyd, fullhyderabad, Welcome To The Neighbourhood are trademarks of LRR Technologies (Hyderabad) Pvt Ltd. The textual, graphic, audio and audiovisual material in this site is protected by copyright law. You may not copy, distribute, or use this material except as necessary for your personal, non-commercial use. Any trademarks are the properties of their respective owners. More on Hyderabad, India. Jobs in Hyderabad.