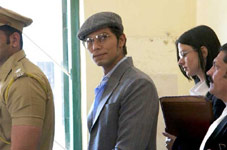 Josh / fullhyd.com
EDITOR RATING
6.0
Performances
Script
Music/Soundtrack
Visuals
8.0
6.0
6.0
7.0
Suggestions
Can watch again
No
Good for kids
No
Good for dates
No
Wait for OTT
No
We didn't have much hope to begin with. There was that worry that this will be yet another case of a filmmaker trying to pass off an (in)famous person's intriguing story as a fully functional film. A story alone doesn't make a film, and barely any of our biopic makers seem to understand that. And as the first half of Main Aur Charles progressed, we were getting increasingly convinced that our fears proved true.

Indeed, so much happens on screen but nothing that really makes you care. Charles (Randeep Hooda with a French accent) is a French-Vietnamese-Indian con artist accused of tricking affluent travellers in South-East Asia into confidence and assuming their identities upon murdering them. After establishing this, the movie moves on to the Central Jail where Charles is serving time (without any actual conviction - he is there for years as an accused and not a convict). With the help of law student Mira Sharma (Richa Chadda) and fellow inmate Richard Thomas (Alexx O'Neil), Charles and a couple of other accomplices escape in broad daylight.

Charles lands in Bombay, flees to Goa, and all the while philanders with multiple attractive women and has a good time in general. And you watch in disbelief at all this indulgence and the failure of the film to bring about an engaging narrative. There is just a stretch of narration by some police officer about how dangerous Charles is. Being told isn't the same as being shown.

Further, some of the supporting cast are unbelievably incompetent (they come across as amateurs). The songs are unimpressive and unnecessary, pulling you away from the chase that already doesn't cause you to invest much. Surely this is a gone case we thought, as we were drawing close to the interval. But something kept us from deciding on a damning verdict immediately.

Maybe it was the confident direction by Prawaal Raman. Although the first half doesn't engage you, you can tell that there is a surehandedness to how every scene is made. The cinematography is marvellous in places. Although the songs are forgettable, the background score takes a life of its own with some excellent sound design. Particularly in one inspired sequence where Charles engages in some post-coital contemplation after seducing a girl away from her boyfriend. Nothing really happens in the scene but the way it is staged is splendid.

This, thankfully, doesn't end up being a flash in the pan. Prawaal Raman proves to be an effective writer and director in the second half. You'll begin to think that holding back the story was probably what affected the first half. As more and more is revealed, plot-wise, you finally get drawn into the happenings on screen. Also, the film veers away from the seeming glorification of a psychopathic criminal to give you the other pole in this story - the Police Commissioner Amod Kant (Adil Hussain).

Hussain is finally given a role that he can do a lot with, and fortunately, he does a lot with it. Amod Kant is an earnest and intelligent police officer who has little regard for a criminal like Charles. His refusal to accept anything positive about Charles is played wonderfully by Hussain, particularly when he has to acknowledge the many talents of his foe. There is a brilliant scene where Kant's wife (an effective Tisca Chopra) quips on how Charles has numerous girlfriends while her husband can barely handle one wife. The uneasy boisterous laugh Hussain pulls in response is so much fun to watch.

Randeep Hooda comes a close second in the acting department. His accent takes some getting used to but he lends such smugness and coolth to the protagonist, it isn't easy to imagine anyone else playing that role. He measures an exact amount of loathing for his character that makes you wince but watch with rapt attention. Among the others, Vipin Sharma, Tisca Chopra, Nandu Madhav, Richa Chadda and Alexx O'Neil make an impression.

Main Aur Charles can possibly be accused of glorifying a hardened criminal, but to expect a movie to subdue the supposedly hypnotic charm of its protagonist on account of his crimes would amount to denying reality itself. If you look up the Wikipedia entry on Charles Sobhraj you'll gather that his very modus operandi was to charm and befriend. And he's still not had a single murder case proved.

The film balances the scales of morality by placing a sincere police officer in the mix. As we watch Charles' complacent manoeuvers, we also watch the thankless efforts of Kant fighting in the face of failure and incorrigibly brainwashed accomplices. Should we choose to take inspiration from a movie character, it's a nice test to see what we get influenced by - The "Does-Things-Right" criminal or the "Does-The-Right-Things" Commissioner.

Main Aur Charles is far from perfect. It's very easy to dismiss, too. But if you are among those who have the patience to let creative artists find their feet (as Prawaal Raman does, in the second half) and who can appreciate isolated technical achievements despite a flawed narrative, then you'll find it a curiously intriguing film. 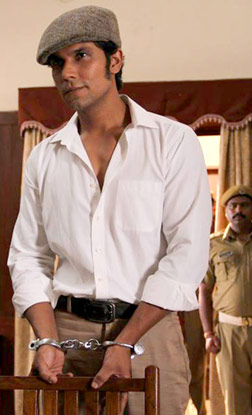 ADVERTISEMENT
This page was tagged for
Main Aur Charles hindi movie
Main Aur Charles reviews
release date
Randeep Hooda, Adil Hussain
theatres list
Follow @fullhyderabad
Follow fullhyd.com on
About Hyderabad
The Hyderabad Community
Improve fullhyd.com
More
Our Other Local Guides
Our other sites
© Copyright 1999-2009 LRR Technologies (Hyderabad), Pvt Ltd. All rights reserved. fullhyd, fullhyderabad, Welcome To The Neighbourhood are trademarks of LRR Technologies (Hyderabad) Pvt Ltd. The textual, graphic, audio and audiovisual material in this site is protected by copyright law. You may not copy, distribute, or use this material except as necessary for your personal, non-commercial use. Any trademarks are the properties of their respective owners. More on Hyderabad, India. Jobs in Hyderabad.