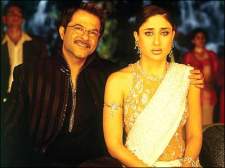 Rohit Murari / fullhyd.com
EDITOR RATING
1.0
Performances
Script
Music/Soundtrack
Visuals
NA
NA
NA
NA
Suggestions
Can watch again
NA
Good for kids
NA
Good for dates
NA
Wait to rent it
NA
If a newbie had tried to handle a subject like Bewafaa, he would have made a muddled hodgepodge for all to see. But with Dharmesh Darshan taking a hand in the matter, the movie will give you an experience beyond all that. You will waddle in the muddle, too.

Those who have seen Kabhi Khushi Kabhi Gham would do well to remember that Poo (aka Kareena Kapoor) sleeps with nothing more than her make-up on. Her alter ego Anjali is not much different, save for a satin nightgown that gets between her and the sheets. Damn!

Kabir Bedi and Nafisa Ali play the Indian dad and the firang mom, respectively, to Anjali and Aarti (Sushmita Sen). On seeing that her younger sister, Anjali, and Raja (Akshay Kumar) have as much chemistry between them as two atoms of an inert gas, Aarti realizes that she has as much significance in the movie. A song later, Aarti decides to die. And with her go any reasons that you might have left to put yourself anymore through this travesty.

Aarti died in childbirth. To take care of her twin daughters, Anjali marries Aarti's husband, Aditya (Anil Kapoor). At this point you look at your watch. Only an hour through. Yes, the expected happens. Raja bumps into Anjali at the airport, and re-enters into her life.

Anjali's fling with Raja goes along nicely until we are introduced to Dil (Manoj Bajpai) and his wife, Pallu (Shamita Shetty). Now, these two have given a whole new meaning to Public Display of Affection or PDA, stopping short only of the act. Pallu, meanwhile, has only amorous glances for Anjali.

What happens next?Connoisseurs of cinema know that the correct answer is ii. Optimists would crave for option v. A fullhyd.com reviewer, though, would want just one sensible scene in the movie.

If you have read this far, you know that the plot is as fresh as last spring's flowers. That is true of Kareena Kapoor, too. One would think that Akshay Kumar would have learnt after Insan. Sushmita Sen is fabulous, as always. And Anil Kapoor reiterates why sometimes it is worth to watch a movie simply because he is in it, this one though might be an exception.

Nadeem Shravan's music comes as a saving grace, especially the title song Ek Bewafaa Hai. But the script and the screenplay are so hackneyed and, well, grup-furf-ghupladuf, that three minutes into the movie you start wondering whether you are watching the movie or the movie is watching you.
Share. Save. Connect.
Tweet
BEWAFAA SNAPSHOT

ADVERTISEMENT
This page was tagged for
akshay kumar bewafaa movie
Bewafaa full movie
Bewafaa hindi movie
Bewafaa reviews
release date
Follow @fullhyderabad
Follow fullhyd.com on
About Hyderabad
The Hyderabad Community
Improve fullhyd.com
More
Our Other Local Guides
Our other sites
© Copyright 1999-2009 LRR Technologies (Hyderabad), Pvt Ltd. All rights reserved. fullhyd, fullhyderabad, Welcome To The Neighbourhood are trademarks of LRR Technologies (Hyderabad) Pvt Ltd. The textual, graphic, audio and audiovisual material in this site is protected by copyright law. You may not copy, distribute, or use this material except as necessary for your personal, non-commercial use. Any trademarks are the properties of their respective owners. More on Hyderabad, India. Jobs in Hyderabad.