Bujjigadu - Made In Chennai Review 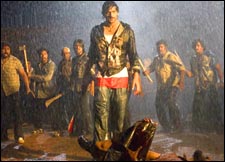 EDITOR RATING
6.0
Performances
Script
Music/Soundtrack
Visuals
7.0
4.0
8.0
7.0
Suggestions
Can watch again
No
Good for kids
No
Good for dates
Yes
Wait for OTT
Yes
Puri Jagannath said recently that he sticks to formula since he doesn't want to play with his producers' money. That's somewhat like asking a friend to invest in a cool company you are starting and then putting all the money he gave you in a savings account to give him assured returns. And actually taking a fee for it.

See, the producer knows he's putting money in an extremely risky medium - he wants you to do something that has a good chance of giving him supernormal returns. Formula films work - when they do - only with big stars and expensive production values, which obviously means if it isn't a really big hit, the returns are meager, if there are even any returns. And most times they don't work even with big heroes - the last 2 films of Chiranjeevi, Mahesh, Balakrishna and Nagarjuna were all average or below average.

The pattern is evident in Puri Jagannath's films - from interesting and innovative movies like Itlu Sravani Subramanyam and Amma Nanna O Tamila Ammayi at the beginning of his career that showed his caliber, he's now reached a stage where it's strictly violence - Bujjigadu is actually rated A, a heroine of Trisha's talent has almost nothing to do, and the comedy goes down with each successive film.

Someone so risk-averse should actually not be making formula movies that are notorious for not working 85% of the times. And for those so risk-averse, this is the wrong industry anyway.

Lacking in even the high star-power that has been characterizing his formula films, Bujjigadu turns out a pretty average movie. A lack of courtship means that romance is non-existent and Trisha is totally wasted. Mohanbabu is a complete misfit in the role of a dreaded ganglord, emanating zero menace and looking avuncular instead. And there is little comedy, that waft of cool breeze that saves many Telugu films.

With all these, you need a miracle to save the film, and several people already say that Jagannath exhausted his quota of miracles with Desamuduru. Alas.

Bujjigadu is the story of, well, Bujjigadu (Prabhas), who runs away from home as a child since the girl he's in love with has asked him to stop talking to her for 12 years after a tiff. He goes to Chennai, turns into a truck of a man there, and returns to Hyderabad 12 years later to find her again, but the girl Chitti (Trisha) and he cannot find each other, though they're both looking for each other. This is always such a lousy plot idea, especially so when it lasts an entire movie.

To make some money, he accepts a contract from a warlord Machireddy (Kota) and his sons to kill a rival Sivanna (Mohanbabu), but Sivanna has to save him from death after the attack on the latter, and takes him under his care admiring his heroics. Chitti turns out to be Sivanna's sister, and Sivanna makes Bujjigadu pledge that the latter will not reveal to her who he is.

Prabhas certainly looks like he was born to beat up people, and has even improved in acting skills (especially if you remember a certain Chakram), but is still pretty far away from getting any awards. Trisha is totally wasted in a role that's hardly there, and if you ask us, the babe who plays her sister Kangana (Sanjana) looks cuter - smitten and coy in an alluring combination.

Mohanbabu is simply not the man to play Sivanna - he looks rather tired, and hardly a vicious gangster. This isn't a movie with scope for great performances anyway, except if you have to play a butcher. Yes, there's gore aplenty, with enough blood and hacking. And Ali is in one of his usual Puri film instalment routines, which are frankly pretty sad - they get carried by the movie than help it. There are in general hardly any LOLs in the film. There are a few good lines for Prabhas, but used as we all are to Trivikram Srinivas films now, they fall short of an unfair benchmark, especially when the whole movie doesn't consistentl;y have ripping dialogues.

The songs by Sandeep Chowtha are trendy and peppy, and will perhaps help an otherwise insipid movie. Insipid for more reasons than one, including some pretty elementary writing, like that whole 12-year thing, and lines like "I love you saala". Watch Bujjigadu if you are at a loss for anything else, and, oh yes, if you are an adult.
Share. Save. Connect.
Tweet
BUJJIGADU - MADE IN... SNAPSHOT
BUJJIGADU - MADE IN CHENNAI SNAPSHOT

See Bujjigadu - Made In Chennai full details
TOP COMMENT
srirajakrish on 23rd May 2008, 12:49am | Permalink
hi this is a good film to in summer
fully entertinement with out any bore
must watch film


4
0
BUJJIGADU - MADE IN... USER REVIEWS
BUJJIGADU - MADE IN CHENNAI USER REVIEWS
1 - 11 OF 11 COMMENTS
POSITIVE  |  NEGATIVE |  NEWEST  |  OLDEST  |  MOST HELPFUL  |  LEAST HELPFUL
USER RATING
4.0
13 USERS
Performances
Script
Music/Soundtrack
Visuals
4.2
3.3
3.8
4.5
Can watch again - No
Good for kids - No
Good for dates - Yes
Wait for OTT - No
its_vinay on 31st Jul 2008, 11:52pm | Permalink
Puri Jaganath has to think more about the scripts instead of hero characterization.In this movie he totally concentrated on hero character (his tamil slang, body language) and forget story line and the script.Another pain in thi smovie is Mohanbabu's character.Frankly speaking except Prabhas characters all other are not mould properly...Puri has to rethink on this...
You can watch this for Prabhas...Njoy
dsrihariraju on 20th Jun 2008, 3:30pm | Permalink
Good to watch
Ramkrishna on 18th Jun 2008, 1:23pm | Permalink
I think the movie would have named "Bongugadu"

RATING
1
Krishna on 26th May 2008, 6:16pm | Permalink
B for Bujjigadu. B also for Bakwaas, Bundle, Bull***t, Bogus, Bhejakeema, Braindead Boooooo (double thumbs down) and Boooohoooo (sob...sob).

RATING
2
Krishna on 26th May 2008, 11:08am | Permalink
Prabhas - one of Tollywood's most overrated stars. He is impressively consistent in dishing out one crappy film after another and once again he doesn't fail to "impress". Pls steer clear of this utter bakwaas film.

RATING
2
pokiriboss on 24th May 2008, 11:44pm | Permalink
I think puri jagan wants to do movie with Rajni. He should be banned from doing telugu films, unless he says there will not be single tamil dialog in his future films.

RATING
2
XLNC Aditya on 23rd May 2008, 12:41pm | Permalink
@ bystander : Whats the use of you going out on a date when the girl you're with is busy checking out how cute or muscular the hero is, and btw the only movie in recent times good enough for dates is parugu... although people may disagree!
bystander on 23rd May 2008, 11:50am | Permalink
xlnc's music point is right - the film has tunes from premadesam (mustafa, no?). but about the film being good for dates, why not? girls will love to watch prabhas, and there's no obscenity.
RATING
6
srirajakrish on 23rd May 2008, 12:49am | Permalink
hi this is a good film to in summer
fully entertinement with out any bore
must watch film


Pros: prabhas performence
Cons:
XLNC Aditya on 23rd May 2008, 12:16am | Permalink
Well, the people at Full Hyderabad are going insane (probably recent Telugu movies have caused them some kind of disorder).

This movie, according to its valued reviewer at fullhyd.com, is good for dates, has performances rated at 7/10, and has music rated at 8/10.

Let me begin with the good for dates thing - if the particular couple were looking for empty theatres then its an option, but there are a million other halls in town showing movies like Bathukamma and Erra Samudram which would also be good for the couples.

Then to the performances, Prabhas acts (I am ashamed at using the words "act" and "Prabhas" in the same sentence, its kind of an oxymoron), as if he's been praised for his antics in Munna, and Mohan Babu looks like an anachronism. Trisha and the other females, are thrown in for songs and sex starved viewers (thats for all the whistles when Mumait Khan appeared on screen). The dialouges were at places good, but they had the been there, heard that kind of feel to them.

And the songs, even a five year old kid could say that the songs were all remixed and repackaged from films like Prema Desham, Dhoom and one artist who calls himself "DADDY YANKEE".

On the whole, the only reason to go to the movie is for the "Rs.50 for 3 hours A.C." offer, although it could leave you with side effects.

P.S. - I ain't against Prabhas, I liked his performance in Chatrapati (although Rajamouli and Keeravani had parts to play in its success).


Pros: none absolutely
Cons: everything
Aakash chandra on 22nd May 2008, 10:18pm | Permalink
Ok!Granted its a routine commercial flick with the supposed Puri touch.,but(and thats quite a big but) its definitely worth a watch. The tamil lingo and the energy that tags along (I am harcore telugu guy FYI) does work in most parts. Dialogues are fresh off the oven and are so tasty you'll forget that all the baggage that could associate with 'em is just that of an appetizer and still you still end up sate. They make an ordinary scene titillate with soaring animation that you start wondering if those are just splices of your own lives. So what if mohan babu is wasted, not much romance in the air, the far fetched 12-year story, the movie is worth double the fun your imagination could normally have opined form the trailer.And before you know that your popcorn bucket is empty, you wont feel a thing as u'd be munching tastier dialogues instead. Sandeep's lilting gels perfectly well with the photography and with prabhas's stylish gyrations. True ali continues to drag back the entertainment-quotient acting drag queen in almost every puri movie, but u'd forgive puri without your knowing as sunil here compensates.Over all definitely above last year's star son launch vehicle, and the prior long-haired lad's stint with the sanyasini.

ADVERTISEMENT
This page was tagged for
movie bujjigadu reiview
lungilo bujjigadu sex story
Bujjigadu - Made In Chennai telugu movie
Bujjigadu - Made In Chennai reviews
release date
Follow @fullhyderabad
Follow fullhyd.com on
About Hyderabad
The Hyderabad Community
Improve fullhyd.com
More
Our Other Local Guides
Our other sites
© Copyright 1999-2009 LRR Technologies (Hyderabad), Pvt Ltd. All rights reserved. fullhyd, fullhyderabad, Welcome To The Neighbourhood are trademarks of LRR Technologies (Hyderabad) Pvt Ltd. The textual, graphic, audio and audiovisual material in this site is protected by copyright law. You may not copy, distribute, or use this material except as necessary for your personal, non-commercial use. Any trademarks are the properties of their respective owners. More on Hyderabad, India. Jobs in Hyderabad.