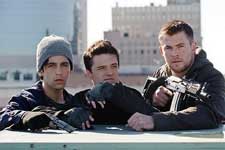 Samrat Sharma / fullhyd.com
EDITOR RATING
3.5
Performances
Script
Music/Soundtrack
Visuals
2.5
1.5
8.0
6.0
Suggestions
Can watch again
No
Good for kids
No
Good for dates
No
Wait to rent it
Yes
People bandy about the phrase "recipe for disaster". Beyond actually trying to make disaster, Red Dawn, on paper, seems like it. First slated for release in 2010, when MGM went through financial trouble, the film got benched for a while. When it was finally picked up for release again, the post-production of the film took extra- long as they changed the nature of the invading forces from China to North Korea, to perform better at the Chinese box office.

Oh, and in case you didn't know, this is a remake of a Reagan-era Soviet invasion film. So, set during the height of the communist paranoia in the United States, the movie has an implausible scenario in which the USSR would invade America successfully. Lacking an actual USSR, they made a film about the PRC, the country with the largest military in the world doing so, despite overwhelming evidence of that never happening. The result of the post-production is that we now have a fantasy film where a military smaller than the US successfully invades the mid-west.

(If you had no clue what the film was about - it's a film about North Korea invading the US for no purpose whatsoever, and a bunch of children led by a very young soldier leading an underground militia to fight back and try to undermine some dodgy sci-fi logic on the Koreans' part.)

This means not only does your dated-looking film with actors from thence released bigger blockbusters looking much younger is completely implausible, it takes on the air of a gun-ownership-justifying, teenagers-conscription-loving propaganda film. All this, in a year when Joseph Kony, the actual guerilla commander who conscripts children in Uganda, was one of the biggest social media (if not actual) stories.

So dubious politics, check. Dated-looking film, check. Now add a dash of laughable writing, and tons of flag-waving for no purpose whatsoever, and one of the worst McGuffins in cinema ever - a phone that is EMP-proof to be used after an EMP strike. If the redolent ordure is not strong yet, let's add a dollop of quite possibly the worst acting ensembles - this, by known actors who have quite an impressive oeuvre to back them up.

Mix this well, add cheap CGI to taste, and action scenes that have no sense of purpose and geography in the mix, to make your chosen disaster. If there was a worse film this year, I don't know about it. It has some excellent background music, and the colour palette, for a 2010 film, is quite decent. But that is scant recommendation in one of the most racist, jingoistic films produced which were also this insipid. Avoid at all costs.
Share. Save. Connect.
Tweet
RED DAWN SNAPSHOT 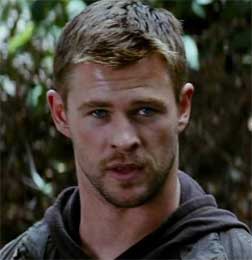 ADVERTISEMENT
This page was tagged for
Red Dawn english movie
Red Dawn reviews
release date
Chris Hemsworth, Adrianne Palicki
theatres list
Follow @fullhyderabad
Follow fullhyd.com on
About Hyderabad
The Hyderabad Community
Improve fullhyd.com
More
Our Other Local Guides
Our other sites
© Copyright 1999-2009 LRR Technologies (Hyderabad), Pvt Ltd. All rights reserved. fullhyd, fullhyderabad, Welcome To The Neighbourhood are trademarks of LRR Technologies (Hyderabad) Pvt Ltd. The textual, graphic, audio and audiovisual material in this site is protected by copyright law. You may not copy, distribute, or use this material except as necessary for your personal, non-commercial use. Any trademarks are the properties of their respective owners. More on Hyderabad, India. Jobs in Hyderabad.