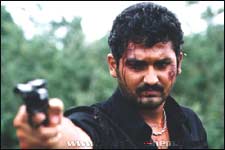 Mithun Verma / fullhyd.com
EDITOR RATING
3.0
Performances
Script
Music/Soundtrack
Visuals
NA
NA
NA
NA
Suggestions
Can watch again
NA
Good for kids
NA
Good for dates
NA
Wait to rent it
NA
You might have seen bad movies before. You might see bad movies today. You might even see bad movies tomorrow. And the day after. And five days after that... Um, what was the point again? Yeah, you can avoid watching them by gorging out your eyeballs from their sockets by using pleasant looking sharpened iron rods...

Sai Kiran is a special officer investigating the going under of a corporate bank. He's greeted by the congregation of the customers who're on the verge of venting out their anger on the bank. He smoothly handles the situation. All he does is ask them to take a moment, and have a look at all the bank employees there. Imagine how nervous a normal working stiff would feel putting his hard-earned money into their hands.

The customers realize their mistake. They should've known how good the place was looking at the 83-year-old guard with the thick glasses and a hearing aid at the entrance. With what competence can he possibly survive a vicious attack? And they were not talking about the director screaming at him to look more animated.

The customers, however, don't give up. They ask Sai Kiran to take a moment, and have a look at all the customers standing there. Imagine how nervous a stuck-up officer would feel explaining that the chances of seeing their money again, depend on a guy who has one hit to his credit in which he sang a song!

Sai Kiran realizes the gravity of the situation. He was feeling truly very nervous. If this movie also doesn't work, he'll have to get back to his singing, which hasn't even half the chances of making it as big as his acting... Jolted by the cue that the scene of the lamenting customers was over, he delivers his emotion stirring dialogue, 'I will be back...'

He now goes about collecting money from all the bank's defaulters. High on the list are Kota Sreenivas Rao and a couple of other influential persons. The first time when Sai Kiran confronts Kota, he leaves a deep scar on his mind. Kota cannot believe that a smalltime bank officer can actually be portrayed this imperfectly! Sai Kiran reaffirmed Kota's decision of not acting in too many movies these days.

The director is not all that impressed by what Kota was thinking. So he has him kidnapped. Then, he has the police commissioner and the home minister also kidnapped. That's because they were not thinking anything. What Sai Kiran was doing is demanding all the money that these guys have defaulted in return for their safe being.

He has tied them to chairs in a city college. But none of the goons or the police is able to track them down. Eventually, the hero successfully returns to the customers all their money's worth.

Giving the viewers their money's worth is another issue. It is clear that the makers of this one felt very deeply for the unfortunate few that lost out in these disgraceful bank scams. If only they felt 1/4th of that pity on the viewers. Sai Kiran is not too bad as an actor. Kota has habitually outperformed everybody and everything in the movie. But the script and direction just will not allow him or any other force to make this one look good. Because, that's the way, aha aha, they like it, aha aha! Whatever!
Share. Save. Connect.
Tweet
SATTA SNAPSHOT

ADVERTISEMENT
This page was tagged for
Satta telugu movie
Satta reviews
release date
Sai Kiran, Madurima
theatres list
Follow @fullhyderabad
Follow fullhyd.com on
About Hyderabad
The Hyderabad Community
Improve fullhyd.com
More
Our Other Local Guides
Our other sites
© Copyright 1999-2009 LRR Technologies (Hyderabad), Pvt Ltd. All rights reserved. fullhyd, fullhyderabad, Welcome To The Neighbourhood are trademarks of LRR Technologies (Hyderabad) Pvt Ltd. The textual, graphic, audio and audiovisual material in this site is protected by copyright law. You may not copy, distribute, or use this material except as necessary for your personal, non-commercial use. Any trademarks are the properties of their respective owners. More on Hyderabad, India. Jobs in Hyderabad.