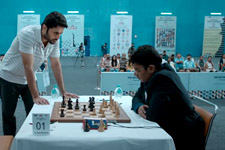 Anil Bandhakavi / fullhyd.com
EDITOR RATING
4.5
Performances
Script
Music/Soundtrack
Visuals
7.0
3.0
4.0
5.0
Suggestions
Can watch again
No
Good for kids
No
Good for dates
No
Wait to rent it
Yes
One of the many one-man shows this season, Check, written and directed by Chandra Sekhar Yeleti, is about a prodigy who ends up in jail on a false terrorism charge. The film, in which the central theme is chess, turns into a story about escape from prison, and attempts to weave a complex set of strategic moves which come together sensibly in the end, much like in a game of chess.

Aditya (Nithiin), along with four others, is found guilty and placed on death row for an act of terrorism that took 40 innocent lives. While he claims he's innocent, there is nothing to counter some activity on his computer that points to his association. Aditya demands that he be allowed representation by a lawyer in court.

Manasa (Rakul Preet Singh), at her father's behest, takes up Aditya's case. She is very reluctant at first because she's convinced that she's fighting for a criminal, but over time she comes to believe in Aditya. Even the Head Inspector at the station eventually flips his opinion in favour of Aditya. However, everyone's hands are tied as they are unable to unlink Aditya from the evidence working against him.

After Aditya figures out his way in prison, one of the older inmates introduces him to chess. He's impressed by Aditya's intelligence and convinces him to rise up the competition ranks to the world stage. A victory on the world stage would be a means to receive a pardon from the President for his crime, all who support Aditya feel. However, Aditya, who's a mastermind of strategy, and is jaded by the system, starts to think up a way of his own out.

Check, after establishing its central character as a brilliant mastermind, fails to follow that up with the kind of labyrinthine story that's worthy of such a character's time. Aditya's life before coming to prison was one of swindling money through white-collar schemes, leaving you a little confused about how to feel about him. As such, his character vacillates between a teary-eyed innocent man trying to get pardoned for a crime he did not do, and a genius mastermind with a stoic exterior and a hint of darkness.

The story itself does not stay consistent. While the main narrative is about various methods being tried to set Aditya free but he finally giving up and trying to figure out his own way, there are curious other things that seem to be happening, but then none of them manages to maintain a suspenseful edge that will have you carrying out calculations in your head. This movie, like many others, relies on a final revelation (in the form of a narration by the main character) that makes everything clear, but that takes away from the excitement of allowing you to stay invested in the plot.

Given the experienced star cast, there is nothing lacking in the performances. Nithiin captures Aditya's indeterminable character with ease. Rakul Preet Singh, Murali Sharma and Sai Chand deserve high scores for the way they live out their characters' personalities.

In the end, Check is an average experience. I doubt that you will resent your choice if you watched this one, but you will quite probably forget the experience by the next day. Dramas covering escape from prison always have potential, but this film's story fails to capitalise on that. It is worth only the performances which ultimately keep it afloat.
Share. Save. Connect.
Tweet
CHECK SNAPSHOT 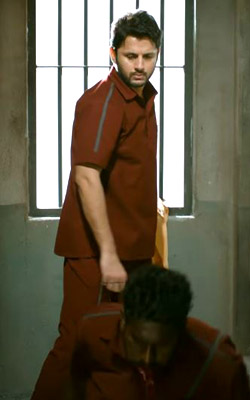 ADVERTISEMENT
This page was tagged for
Check telugu movie
Check reviews
release date
Nithiin, Rakul Preet Singh
theatres list
Follow @fullhyderabad
Follow fullhyd.com on
About Hyderabad
The Hyderabad Community
Improve fullhyd.com
More
Our Other Local Guides
Our other sites
© Copyright 1999-2009 LRR Technologies (Hyderabad), Pvt Ltd. All rights reserved. fullhyd, fullhyderabad, Welcome To The Neighbourhood are trademarks of LRR Technologies (Hyderabad) Pvt Ltd. The textual, graphic, audio and audiovisual material in this site is protected by copyright law. You may not copy, distribute, or use this material except as necessary for your personal, non-commercial use. Any trademarks are the properties of their respective owners. More on Hyderabad, India. Jobs in Hyderabad.