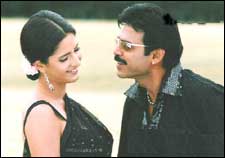 Mithun Verma / fullhyd.com
EDITOR RATING
7.5
Performances
Script
Music/Soundtrack
Visuals
NA
NA
NA
NA
Suggestions
Can watch again
NA
Good for kids
NA
Good for dates
NA
Wait for OTT
NA
It is so simple. Make a movie with an elaborate plot. Cast actors who can carry the movie on their single shoulders. Write the character sketches of each and every character. Include music that will remain with people forever. Make sure every frame is rich and well picturized. Be particular and pay attention to every little detail. Show this movie to an audience. They will think it's stupid.

Instead, make a Malliswari. Godawfully simple plot. Absolutely nothing new to offer but definitely something to help you forget. Forget all the worries and all the troubles, namely, all those pathetic excuses of movies you've been killing to get out of your system.

Every single man that was watching the movie was also desperately waiting for Malliswari to get into Prasad's life, only to realise later, that they were better-off without her. Because it will be the most brutalising moment of their lives to get back to their home, or whichever bar that they live in, without her. Such is the power of Nature's creation whose only intention is to suffer men with women like her.

Prasad is also but a man. Naturally, he wobbled around, bobbing his head like a one-end-grounded spring, and ricocheting like a punctured balloon on seeing Malliswari. I'm not trying to say that all it would take for a man to fall in love is a young, unmarried girl. But in all fairness it's hard to find an unmarried, young man with that name, to fall in love.

So Pellikaani Prasad, as others loved to tease him, decided that Malliswari's the one to help him get rid of that demoralising nick name. Hence starts the romance. But the romance seems a little indifferent to say the least. Malliswari hardly ever responds to all the snazzy moves by Prasad. His enthu seems to be doing the work for both of them. He seems to be singing, teasing, caring and dancing all by himself. Oh! Even acting all by himself. Now we know...

But the real reason, of course, is that Malliswari is royalty - she's Her Royal Highness Of Mirzapur. What has that got to do with bad acting skills, you ask? Tell me something, how many times have you seen The Queen acting? Ok, let's not get into how many times we've seen her in a bikini, because believe me, not many people want to see her that way.

This princess, however, wears bikinis, emulates the rose petals scene from American Beauty, and cannot forget all the love she got from Prasad even though he never knew her as a princess. So she forsakes her royalty for him in the end.

Action is plugged in, in the form of Kota Srinivas Rao and all his evil schemes to slay the princess for her wealth. For a small role, he's got such a presence in the film.

On the subject of presence, the real hero of the movie is the underlying humor present consistently throughout the movie. The credit for this goes to Trivikram for writing such engagingly quick-witted dialogues.

Then, there's Venky's presence - in the office-politics gags with a colleague (The Drew Carey Show style), in the philosophical love talk (Dil To Pagal Hai style), in the singing-dancing routine on the ship (Kal Ho Na Ho style), in the awestruck simpleton in love with a celebrity role (Notting Hill style) and in the breezy lovable guy next door role (Nuvvu Naaku Nachaav style). Venky rocks. And Katrina is the only one I can think of that looks better in a debut than Dimple did in Bobby.

The film, however, could've improved in the music department. Also in panning out the romance between Prasad and Malli, it seems too abrupt and incomplete, and not nearly as endearing as in Vijaybhasker's other masterpieces like Nuvve Kaavali, Manmadhudu and Nuvvu Naaku Nachchav.

See Malliswari full details
MALLISWARI USER REVIEWS
1 - 3 OF 3 COMMENTS
POSITIVE  |  NEGATIVE |  NEWEST  |  OLDEST  |  MOST HELPFUL  |  LEAST HELPFUL
USER RATING
8.0
102 USERS
Performances
Script
Music/Soundtrack
Visuals
NA
NA
NA
NA
Can watch again - NA
Good for kids - NA
Good for dates - NA
Wait for OTT - NA
Saravanan on 10th Jul 2004, 5:18pm | Permalink
Hi my mother tongue is tamil and from chennai, I like venkatesh and dont miss his movies when shown in gemini ,etv and teja tv . I used to watch telugu movies whenever i go to thirupathi . Now a days lot of telugu movies are being released in chennai thanks for that . And I enjoyed every bit of Malleshwari with venky being called something like pellikaani prasad which i think is unmarried prasad fun simple fun u must see the scene where he tells the ghost story to sunil and the dining scene with brammanandam. i liked the songs like malleshwari, others i dont remember the words

pure fun in the lines of nuvu naaku nachavu

ADVERTISEMENT
This page was tagged for
malliswari movie review
www.mallishwari movie information
Malliswari telugu movie
Malliswari reviews
release date
Follow @fullhyderabad
Follow fullhyd.com on
About Hyderabad
The Hyderabad Community
Improve fullhyd.com
More
Our Other Local Guides
Our other sites
© Copyright 1999-2009 LRR Technologies (Hyderabad), Pvt Ltd. All rights reserved. fullhyd, fullhyderabad, Welcome To The Neighbourhood are trademarks of LRR Technologies (Hyderabad) Pvt Ltd. The textual, graphic, audio and audiovisual material in this site is protected by copyright law. You may not copy, distribute, or use this material except as necessary for your personal, non-commercial use. Any trademarks are the properties of their respective owners. More on Hyderabad, India. Jobs in Hyderabad.