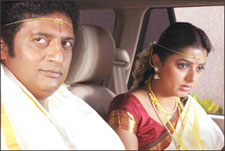 Ramya C / fullhyd.com
EDITOR RATING
4.0
Performances
Script
Music/Soundtrack
Visuals
4.0
8.0
4.0
3.0
Suggestions
Can watch again
NA
Good for kids
NA
Good for dates
NA
Wait for OTT
NA
Our estimates indicate that about 40% of male, Telugu movie watching population would consider Collector Gari Bharya a poor satire on their lives - the 40% who cower to so much as make a suggestion to the wife / girlfriend / mother / sister, forget order her. They might lead lives undercover, but don't we all know they exist?

Collector Gari Bharya addresses serious subjects - the preference for a male child in our society, and women losing their identity post-marriage. And it employs all the cliches known to mankind, with the final result only managing to tire the viewer. It almost mocks at the women who make the choice of becoming a house wife, implying that all stay-at-home women are inferior to their working husbands.

The movie suffers mainly because the character development is so bumpy; the director seems to have been under the impression that regular sepia-flashes on Bhoomika's pretty face are enough for the audience to digest the transition of a quiet wife to an unreasonable feminist leader, and of a dominating, son-craving husband to a man who accepts the feminist wife without as much as a whimper. Or is the director telling us that men secretly want to be dominated, and are happy to hand over the reins?

But enough of hyper-analysis. Indu (Bhoomika) is a gold-medal-winning MBA graduate, who is married off to All-India IAS topper Gautam (Prakash Raj) right after she finishes college, because her made-only-in-movies father gives his word to Gautam's father without even asking for Indu's consent.

Like most women who get married, Indu also expects her husband to be sweet and understanding and romantic; and like all of the married women, she is disillusioned soon. The collector husband only wants a son who can carry on his IAS legacy - and all this while we thought it was only the political leaders and actors who want to have heirs to their serfdom.

Indu has 2 daughters, and Gautam gets increasingly frustrated, and makes it clear to his wife that she is expected to keeping having children till she gives him a son. So she has a son, amidst many sepia-flashes.

A chance meeting with an old friend makes Indu realize that she has not got an identity of her own, and she sets about changing it by organizing rallies, calling for equality of men and women. Her dedication to the cause is explained to the audiences by making her spout a "let me live my life" after every 5 minutes.

Since Indu's rallies are targeted at women, since Gautam is not a woman, and because it is already over two hours and the hero and herione should hold hands and make up about now, Indu has an accident. We already told you about the cliches.

The parallel track about Gautam's sincerity as a collector, and the various middlemen surrounding the bureaucrats and ministers, is mildly entertaining. The actors are all competent; Prakash Raj and Bhoomika are very good, even if they look slightly mismatched. But then it could be that director Krupaakar Reddy wanted to show how women are selfless by making a beautiful woman accept a beer-bellied, older-looking guy.

The music is standard fare, including the mandatory lewd, suggestive song, which has a semi-naked woman gyrating, baring her mid-riff. The movie is mostly set indoors, not leaving much scope for visuals.

Collector Gari Bharya is a simplified view of the problems married women face, and offers even more simplistic solutions. We at fullhyd.com at much more pessimistic, and believe leopards do not change spots because of lectures or accidents. It's your call thereafter.
Share. Save. Connect.
Tweet
COLLECTOR GARI BHARYA SNAPSHOT

ADVERTISEMENT
This page was tagged for
collector gari bharya full movie download
collector gari cinema
Collector Gari Bharya movie artist names Telugu
Kalektar gari bharya encyclopedia
collector gari bharya wiki
Follow @fullhyderabad
Follow fullhyd.com on
About Hyderabad
The Hyderabad Community
Improve fullhyd.com
More
Our Other Local Guides
Our other sites
© Copyright 1999-2009 LRR Technologies (Hyderabad), Pvt Ltd. All rights reserved. fullhyd, fullhyderabad, Welcome To The Neighbourhood are trademarks of LRR Technologies (Hyderabad) Pvt Ltd. The textual, graphic, audio and audiovisual material in this site is protected by copyright law. You may not copy, distribute, or use this material except as necessary for your personal, non-commercial use. Any trademarks are the properties of their respective owners. More on Hyderabad, India. Jobs in Hyderabad.