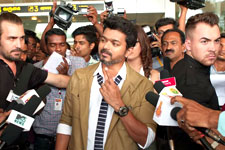 1. Sundar Ramaswamy explains the concept of a ballot vote and Section 49-P.

2. Sundar Ramaswamy walks through a medical facility full of injured people who have been failed by different departments of the same government. In doing so, he clarifies how the issues and frustrations citizens experience on a daily basis are systemic and not solely due to the person holding the highest office in the land.

4. The significance of a lowly tomato.

5. The relationship between a father and his daughter, and the extent the duo goes to to maintain their vice-like grip on power.

The previous section of this review might have taken you about a minute to read, it took us about 10 minutes to write, and it takes the film about 20 minutes to bring it to the silver screen. However, the runtime of Sarkar is 164 minutes.

Sarkar follows a fortnight in the life of Sundar Ramaswamy (Vijay). He is the CEO of a multi-billion-dollar company based in the United States Of America. His arrival to India makes heads of other companies shake in their boots as Ramaswamy has a history of beating his competition to pulp and then drinking that pulp as part of a healthy breakfast. Little do they know that the man has no financial incentive with his most recent trip to his hometown. Instead, the incentive is to exercise his right as a citizen of the world's largest democracy and vote in the state's general elections.

Much to his dismay, Sundar discovers that his vote has been cast by a fraudster. He slips into a version of rage that only a CEO of a multi-billion-dollar company can afford to slip into. He has his assistant call the office of the Chief Minister and the Election Commissioner. He recruits the best lawyer in the land. And most impressive of all, files paperwork that bars the results of the election from being declared until his vote has been cast and counted.

This act of defiance grabs the attention of the aam aadmi and their incumbent leader. While a large chunk of the population is outraged that they too have been suppressed by voter fraud, the Chief Minister is outraged that his fourth consecutive coronation has been halted by the actions of one, seemingly insignificant, man. What unfolds from this point on should have been a political drama, but what we ultimately get is Sarkar.

The difference between a political drama and Sarkar can be distilled down to their presentations and story-telling. In a political drama, strong characters with distinct characterizations act as conduits for political ideologies. Be it in V For Vendetta or our very own homegrown Prasthanam, the characters, their motivations and the world around them are etched with such painstaking detail that cinematic synecdoche is achieved almost effortlessly. With Sarkar, however, the message precedes the movie. The cart is miles ahead of the horse, and every time the horse catches up, the cart rolls downhill a few more miles.

This is not to say Sarkar is a movie with no merit. The horse does occasionally catch up as we just said. The aspects of our political system the film chooses to discuss are so relevant that when we typed "section" into our google search bar "49-P" came up as the first suggested search phrase. People want to understand the world around them better, but much like the CEO of a large corporation, Sarkar follows the "ends justify the means" mantra. Machiavellian methods of story-telling or politics are frowned upon for a reason.

For a film that rightfully points out that our problems are a result of both our inaction and a systemic decay in our politics, Sarkar resorts to ploys no better than a politician promising a kilo of rice for 1 rupee, as a means of papering over cracks that are never going to be fixed.

For example, a child suffering from third-degree burns and a poor woman bellowing about how the pain she may suffer from a baton to her sternum is nothing compared to the one she experienced during her labour are monumentally cheap ploys simply because these ancillary characters are here to prove a point in the most blatant way possible and are soon forgotten once said point has been made. Also note that no middle-income professional is ever outraged - the outrage is reserved for the proletarian.

It is baffling to watch a film weaving its ideas into its script so effortlessly while simultaneously short-changing its primary, secondary and ancillary characters, and the world they inhabit, in equal measure.

We say this because the film's protagonist is a wafer-thin, Sundar Pichai knock-off who is in any way bearable simply because of the charisma of the man playing the role. He is a "corporate criminal" that never commits a crime. Sundar Ramaswamy is a character so one-note that the snippets of backstory afforded to him by a group of comically dedicated IT professionals and Varalakshmi Sarathkumar are his most interesting aspects.

The antagonists too are similarly one-note barring a couple of genuinely inspired scenes. Unlike Raghuvaran from Oke Okkadu, Pala Karuppiah's character is always 10 steps behind his foe. He is so inept that he gives up his goals at the face of the first obstacle that comes his way. The villain and his cohorts never force the protagonist to make any tough / morally ambiguous choices, and thus humanize neither themselves nor their opponent.

And if you thought you could escape this relentlessly predictable movie by listening to some good tunes, we have bad news there, too. This film's soundtrack follows the tried and tested formula of two romantic songs, a montage song, a poignant poem and a rah-rah anthem, and unsurprisingly none of these tunes and croons is enough to get an audience off their seats.

While the camera lingers on glory shots, drenching its larger than life hero with bright lights and god-like adoration, we asked ourselves - how did the standard of story-telling gradually drop from Thuppaki to Kaththi to Sarkar? Is it a meta-commentary about the journey of a public servant? Everyone comes into the initial fray with big ideas and sparkly eyes, but millions upon millions of rupees breed complacency.

If the film is a piece of self-aware social commentary, we tip our hats to it, but until we have definitive proof, those glory shots of our Lord and saviour ring a tad hollower with each iteration. 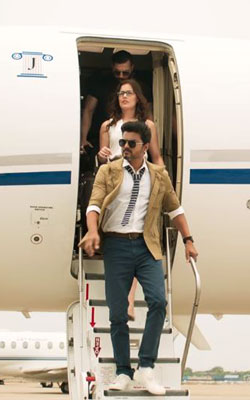 ADVERTISEMENT
This page was tagged for
sarkar movie on movierulz
Www.movierulz sarkar telugu movie.com
sarkar movie from movierulz
telugu sarakar full movie watch online
sarkar movie.movierulz
Follow @fullhyderabad
Follow fullhyd.com on
About Hyderabad
The Hyderabad Community
Improve fullhyd.com
More
Our Other Local Guides
Our other sites
© Copyright 1999-2009 LRR Technologies (Hyderabad), Pvt Ltd. All rights reserved. fullhyd, fullhyderabad, Welcome To The Neighbourhood are trademarks of LRR Technologies (Hyderabad) Pvt Ltd. The textual, graphic, audio and audiovisual material in this site is protected by copyright law. You may not copy, distribute, or use this material except as necessary for your personal, non-commercial use. Any trademarks are the properties of their respective owners. More on Hyderabad, India. Jobs in Hyderabad.