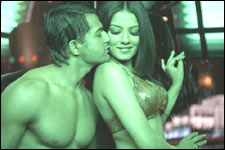 Samrat Sharma / fullhyd.com
EDITOR RATING
6.0
Performances
Script
Music/Soundtrack
Visuals
NA
NA
NA
NA
Suggestions
Can watch again
NA
Good for kids
NA
Good for dates
NA
Wait for OTT
NA
I have never been a big fan of Himesh Reshammiya’s music (it’s an acquired taste, I’m assured), and Director Suneel Darshan’s oeuvre is littered with half-baked films and the very Bollywood factory pap that we are getting tired of. To add to that, Bobby Deol, Upen Patel and Celina Jaitley have been guilty of some truly terrible acting in their recent outings.

Yes, I had already made up my mind about Shakalaka Boom Boom even before going in to watch it. Needless to say, expectations were at their minimum. So sure was I in my understanding that the film would break all records of being terrible, that I had already begun to make witty one-liners in my head (complete with a Shakalaka Poo Poo joke).

Two and a half hours later, I am not so sure anymore. There are bits in the film that are surprisingly good. The story and treatment are top-notch, and hey, the actors act. Sigh. There go my jokes.

Suneel Darshan’s latest is not really so much about music, as it is about jealousy, inferiority complexes, spite, and above all, human frailties. Very obviously an adaptation of Amadeus – though I am not sure if Darshan and writer Anurag Kashyap were inspired by the Miloš Forman film or the Broadway theatrical production starring Sir Ian McKellan – this film does away with the religious connotations to a large extent, and sets it in the modern times, removing all historical significance.

AJ (Bobby Deol) is the toast of the Indian music scene in New York, a veteran music composer and singer who has released multiple hit albums. He is complacent in his absolute dominance over the industry, helped by his PR manager, Sheena (Celina Jaitley), and his team at the music label he works for.

Enter Reggie (Upen Patel), a young, talented and charismatic musician who plays at underground gigs, but is fast becoming popular. He sleeps with Sheena to get introductions with the bigwigs of the industry, and moves in on the scene that AJ thinks he owns.

Initially rivals in love, both are smitten by another up-and-coming singer, Ruhi (Kangna Ranaut). That is soon resolved, as Ruhi can’t help but be strongly attracted to the magnetic Reggie.

AJ not just feels humiliated and defeated, when he realizes that Reggie is way more talented than him, he resolves to do anything to stop him from becoming a star. With help from the stung Sheena, he fakes friendship with the brash and irreverent Reggie, and begins his sinister plan to bury his talent.

The rest of the film explores their dark personalities, and the emotional twists they must go through before finally reaching a crescendo from where self-destruction and absolute dominance are the only two options. This is the single most strong point in the film – the emotional quagmire and the steadfast refusal of the script to portray any one of them as a good guy. Both of them are dark, spiteful and obsessed individuals who must ultimately decide for themselves whether their actions are honest or not.

An inevitably, they make the wrong decisions. This is a refreshing change from a standard good guy vs. bad guy plot, and the script’s individualism and strong understanding of the Amadeus sensibility pervades through.

What mars the movie, however, is the director’s refusal to let his film be hijacked by an interesting and different script. Darshan continuously falls back on Bollywood clichés and erratic pacing decisions. He goes so far as to try and portray Reggie as a good guy at the end of it all, but really – that’s such a waste.

The beginning of the film suffers from similar pangs of Bolly-guilt that Darshan carries through. It’s almost as if he is feeling ashamed of a dark film, and tries to infuse a highly insipid and unfunny ‘comedy’ track. Actually, make that two. His understanding of the music industry is also limited to the film industry, so the film suffers from having these men toasted as stars and actors, not composers.

And while the film takes almost the entire first half to pick up pace and start the actual rivalry, this terrible part cannot be entirely blamed upon the director. The actors ham and struggle to find their footing in the proceedings, and only in the second half (with the reliable exception of Celina Jaitley’s bad acting chops) do they finally get into the rhythm of the film and start delivering. By the time Deol delivers his final outburst, you realize he has finally sunk his teeth in his character. Too bad the film ends soon after.

Oh, and the music. Let’s just say none of the songs that Reggie sings or composes are anything I would call a ‘work of genius’ or ‘brilliant’. That is another weak point in the film, really. The fact that AJ rues his mediocrity and fears Reggie’s brilliance is not exemplified by the music at all. You just take that with a pinch of salt and go ahead with the ride. This film would have been better suited to some other profession, or would have been better serviced by a score that was not just foot-tapping masala music to be forgotten in a month.

Add to it the extremely rushed and confused end, and you will find yourself wondering “what the…?” by the time the title track comes on screen. You see my predicament now? On one hand all the things that I feared could go wrong with the film, do, and on the other hand the film shows tremendous amounts of promise in the way it presents a tight story that packs a wallop.

The middle ground rating is exactly that – full points for all the things it does right, and minus half for all the things that go wrong. Watch it – you won’t be disappointed, but carry enough popcorn to while away the first half.

ADVERTISEMENT
This page was tagged for
Shakalaka Boom Boom hindi movie
Shakalaka Boom Boom reviews
release date
Bobby Deol, Upen Patel
theatres list
Follow @fullhyderabad
Follow fullhyd.com on
About Hyderabad
The Hyderabad Community
Improve fullhyd.com
More
Our Other Local Guides
Our other sites
© Copyright 1999-2009 LRR Technologies (Hyderabad), Pvt Ltd. All rights reserved. fullhyd, fullhyderabad, Welcome To The Neighbourhood are trademarks of LRR Technologies (Hyderabad) Pvt Ltd. The textual, graphic, audio and audiovisual material in this site is protected by copyright law. You may not copy, distribute, or use this material except as necessary for your personal, non-commercial use. Any trademarks are the properties of their respective owners. More on Hyderabad, India. Jobs in Hyderabad.