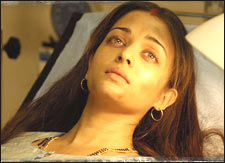 Samrat Sharma / fullhyd.com
EDITOR RATING
5.0
Performances
Script
Music/Soundtrack
Visuals
NA
NA
NA
NA
Suggestions
Can watch again
NA
Good for kids
NA
Good for dates
NA
Wait for OTT
NA
So here comes Provoked: A True Story, with a strong British technical sheen and an underplayed Bollywood melodramatic sensibility, all to win our hearts and make us gasp in horror at what the protagonist went through. Sadly, it doesn’t always hit it right on the head. You notice a lot of people coming out of the screening apologetic for not liking the film enough.

Let’s get the tale out of the way first. One summer night in 1989, British-born Indian Deepak Ahluwalia (Naveen Andrews) is burnt alive as he sleeps. His wife Kiranjit (Aishwarya Rai) is discovered inside in a state of shock. Her fingerprints are found all over and she does not deny the charges either.

The jury declares her guilty of first degree murder, and she is sentenced to life imprisonment. Multiple story strands start interweaving as you learn that Kiranjit had come to England from Punjab after marrying Deepak, which is where she truly discovers the horror that is her marriage. She is continually beaten and abused physically, verbally and sexually, while she silently puts up with it until that fateful night.

In the prison, as Kiranjit remarks in the film, for the first time she feels ‘free’. Fellow inmate Veronica (Miranda Richardson) takes to her and begins teaching her English. She also gets her relative to help file an appeal. Meanwhile, a social activism organization called the Southall Black Sisters takes up her case, and headed by alumnus Radha (Nandita Das), create awareness of her plight.

If you haven’t noticed this on the posters or the promos, Provoked: A True Story is a film by Jag Mundhra. His oeuvre consists of mostly semi-pornographic films (with outrageous names like LA Goddess and Wild Cactus), and one conscience-filled over-the-top drama, Bawandar. It is with great difficulty that he helms such a restrained project and ties to tell a real life story with minimum masala applied to it.

Like I said, however, you may feel apologetic for not liking the film entirely. That has nothing to do with the empathy you share with the protagonist. This is entirely due to a lackadaisical screenplay that mars the film’s pace and treats you to some truly terrible dialog. So much so that there are moments you see the actors trying very hard indeed to deliver them with a straight face.

Jag Mundhra tries very, very hard to finally deliver a respectable piece of cinema, and the effort shows. His main focus is getting the story over with, and rarely does he give any scope for the actors to fully deliver their emotions. He is in such a tearing hurry that Madhu Ambat’s nuanced photography is nigh but wasted.

The actors must share some blame for the state of affairs that is – with the exception of Rai, everyone acts as if though they were in a bad K-soap. Even Naveen Andrews and Nandita Das are guilty of being shallow and predictable in their performances. Worse yet, the supporting cast around Rai rallies forth with such mediocrity, that you begin to doubt the sincerity of the entire production.

Aishwarya has a certain charisma that supersedes the tacky dialog and the bad supporting cast; she stands as the lone dignified presence and carries the film through on her shoulders. She is the only reason – apart from the strength of the source material – that the film works. Everyone tries hard, but the tired and hackneyed screenplay doesn’t give them much scope to do good, with the strong exception of Rai who is bent on proving the film can work.

On a more thematic level, what you especially find annoying is the painting of white and black that the film tries to do. There are no justifications or psychological intricacies of why Deepak is a vile wife-beater. The film is just happy to say, hey – he just is. Which may well have been the case, but the real Kiranjit Ahluwalia has refuted that in multiple interviews since her book got published.

And yet, here is a film that has some strength in the central theme and story and moves forward with just that. I just wish it was better presented, and had a better screenplay. Don’t feel bad if you don’t like it as much as you should – it’s not your fault, it is Mundhra’s.
Share. Save. Connect.
Tweet
PROVOKED SNAPSHOT

ADVERTISEMENT
This page was tagged for
Provoked english movie
Provoked reviews
release date
Aishwarya Rai, Miranda Richardson
theatres list
Follow @fullhyderabad
Follow fullhyd.com on
About Hyderabad
The Hyderabad Community
Improve fullhyd.com
More
Our Other Local Guides
Our other sites
© Copyright 1999-2009 LRR Technologies (Hyderabad), Pvt Ltd. All rights reserved. fullhyd, fullhyderabad, Welcome To The Neighbourhood are trademarks of LRR Technologies (Hyderabad) Pvt Ltd. The textual, graphic, audio and audiovisual material in this site is protected by copyright law. You may not copy, distribute, or use this material except as necessary for your personal, non-commercial use. Any trademarks are the properties of their respective owners. More on Hyderabad, India. Jobs in Hyderabad.