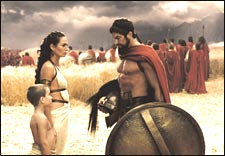 Samrat Sharma / fullhyd.com
EDITOR RATING
7.5
Performances
Script
Music/Soundtrack
Visuals
NA
NA
NA
NA
Suggestions
Can watch again
NA
Good for kids
NA
Good for dates
NA
Wait to rent it
NA
300 is an astonishing piece of work. Not just because of the visuals or the action, though, but because of Zack Snyder's unwavering respect for the elegant poetry in Frank Miller's graphic novel on which he bases his film.

There is a lot of pompousness in the way the story is told, and the testosterone-laden tale has its fair share of trouble, thematically as well as structurally, but the passion behind a story and a vision told in a certain hyper real language is very real, and very commendable. The bombast is frankly ridiculous, but the accompanying visual splendor more than makes up for it.

And let's face it, you are not going to watch 300 for its intense human drama, much like no one reads Playboy for the articles. This is magnificent action erotica – this is the popcorn flick of popcorn flicks – and there it delivers immensely. Snyder is on the same page as Miller in depicting the Battle of Thermopylae as a heady cocktail. Add 20% history to 80% ooh-this-looks-cool, sprinkle liberally with blood and add politics to taste.

The operatic theatricality of the tale make itself manifest from the beginning itself – when a Persian messenger arrives in Sparta demanding tributes for his God-King Xerxes (Rodrigo Santoro), the Spartan King Leonidas (Gerard Butler) kicks him down a well (This. Is. SPARTAAA!!), and ensures war between his small nation and the biggest empire of the world.

When the holy priests side with Xerxes and proclaim it unholy to go to full-scale war, Leonidas and his personal bodyguard of 300 Spartans head to the pass at Thermopylae, where in a narrow entry in the mountains, the Persian numbers may yet be thwarted.

While Miller's tale is a stylized rendition of actual facts, Snyder takes it a step further by trying to flesh some things out in his version, especially the events in Sparta. While Leonidas leads his men to almost certain death, his wife and Queen Gorgo (Lena Headey) tries to convince the council elders to send the entire Spartan army to back her husband up. While this is obviously done to provide some pacing and gravitas to the narrative, it just feels a bit disjointed and gives the film more weight to carry, slowing things down when things don't need slowing down.

At points the home track seems half-serious, and that is its undoing. The hyper-real thunder and glory of the battle sequences is the biggest strength in Snyder's quiver. There are so many stunning moments straight out of the graphic novel, that you sometimes gape in awe. The action is crucial to this film, and Snyder channels the beauty of the shots and always gets back to the brutal action that defines this treatment of the story.

But Snyder is not interested in simply regurgitating the comic book, and adds to the action sequences a fluid motion sensibility. No more of the crappy jump cuts, he shows the Spartans going through multiple opponents in one long shot, and it helps establish the visceral technique of these soldiers.

How Snyder deals with the whole hyper-real aspect of the story is also part of the film's shortcomings. While he is completely at home in the action sequences, pitting Spartan bravery against the grotesqueness of the massive Persian army, he keeps the mood similar in the slower moments. This makes the quiet dramatic moments, be they the ones at Sparta or the narration voiceover by Dilios (David Wenham), seem fairly ludicrous. What compounds the trouble is that Miller has a certain fractured noir style to his dialog, which works well with his art, but sounds silly when spoken out loud by a narrator.

But the stuff that works, works really well. The audacious art direction and cinematography are spot on for the film, and the action choreography is plain genius. Of the actors, Gerard Butler gives a performance that appeals to the comic book superhero fan in you immensely. The fury and vehemence of the character shine through as simply as the nobility and the sense of mischief. He gives a roaring performance, and matches the tone of the film with his hot-blooded jingoism.

Beneath the excessive, and sometimes gleeful, violence, there are also the political undercurrents. The good powers of the West against the corrupt nation to the East is a metaphor for the US-Iraq war, and there is no hiding that. The added sections in the film that were not present in the graphic novel justify the wilful act of war by talking about freedom and preserving their way of life, much like the invective that certain World leaders have been spewing.

What is interesting is that the film is unable to completely keep its tropes in check, as it could be argued that the sexually deviant, multi-nation coalition with superior numbers and technology attacking a small band of morally stiff and dedicated-to-the-cause men is actually the depiction of the invasion of Iraq, or the possible future one of Iran.

It is perhaps the intended modern relevance and the deliberately ambiguous subtext of the film that makes it work beyond just another action film. Even without looking at them, the kinetic energy of the film is enough to carry the popcorn munchers through, though.

I wish Snyder was able to do a better job at the pacing and the quieter moments, especially the Sparta interludes, but you have to give him marks for trying. With 300, he has tried to make a film that is more than just a great romp, and while he may not have succeeded entirely, it is still a great romp. This is a boisterous and ferocious telling of a legend, of men so brave that they challenged the mightiest empire, and decided that even in death, they will inspire others to defend their cause.
Share. Save. Connect.
Tweet
300 - THE MOVIE SNAPSHOT

"waste of money? too much violence? visually phantasmagoric suprasplendiforous hell-raising barn-storming eye-wrentching yappity yap...? THIS IS THREE HUNDRED! and this is how it's meant to be."

so shut up and watch Munna instead of passing your useless judgement on a Frank Miller masterpiece and a brilliant movie reproduction of said masterpiece.
finally, Venkat Kishore Ryakala, good luck for your GRE. hope you go to the USA, get stuck there, never come back and watch crappy downloaded WMVs of camera printed Telugu films.

the movie is just paise vasoool.

RATING
4
Venkat Kishore Ryakala on 17th Mar 2007, 5:37pm | Permalink
ok, hype and visually phantasmagoric suprasplendiforous hell-raising barn-storming eye-wrentching six-hitting (world cup fever) socket ripping gravel burning nitro-fuelled power violence aside, whats this film really offering? I'd rather spend my time at home translating kafka into bhojpuri and then selling it on E-bay whilst polishing my monocle for advancing reasearch on research, rather than pander to the delusional oft-moronic always-sophomoric whims of the post-pubescent flocks of human material which flocks to the theatres in throves, hankering for blood, violence and both..no siree...the reviewer did notice structural deficiencies before abasing himslef to the high priest of hubris and it is to disillusion all ye acolytes of avarice that I take this stand!

ADVERTISEMENT
This page was tagged for
300 - The Movie english movie
300 - The Movie reviews
release date
Gerard Butler, Lena Headey
theatres list
Follow @fullhyderabad
Follow fullhyd.com on
About Hyderabad
The Hyderabad Community
Improve fullhyd.com
More
Our Other Local Guides
Our other sites
© Copyright 1999-2009 LRR Technologies (Hyderabad), Pvt Ltd. All rights reserved. fullhyd, fullhyderabad, Welcome To The Neighbourhood are trademarks of LRR Technologies (Hyderabad) Pvt Ltd. The textual, graphic, audio and audiovisual material in this site is protected by copyright law. You may not copy, distribute, or use this material except as necessary for your personal, non-commercial use. Any trademarks are the properties of their respective owners. More on Hyderabad, India. Jobs in Hyderabad.