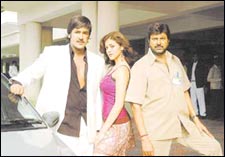 EDITOR RATING
3.0
Performances
Script
Music/Soundtrack
Visuals
NA
NA
NA
NA
Suggestions
Can watch again
NA
Good for kids
NA
Good for dates
NA
Wait for OTT
NA
You have to rid yourself of many biases to successfully complete watching a film that casts Vishnu Vardhan Babu in the lead role.

The first bias is that he simply cannot pull off a film on his own. The second bias is that he cannot do it even if his father casts himself in a role to draw in the crowds. The third bias is that it’s impossible to watch a remake of a well-crafted Bollywood film when it stars him in the Telugu avatar, if you have already watched the Hindi one. The fourth bias is that he is not the kind of person who can make a hit of a film in Telugu when its original in Hindi flopped in the first place.

If you have fought off all these biases before entering the theater, it’s still no consolation, for there is lots more to fight in the theater.

The first is an intro to Hyderabad as the credits roll at the beginning. It looks like a documentary that would bore even the guys who make the news reels at Films Division. You do not begin your film like that, especially since all that that intro seems to do is show all that is wrong with Hyderabad – hello, your viewers have come to get entertained, remember? And by the way, let’s face it, Hyderabad does not look good from atop anywhere.

Then, you realize pretty quickly – like in the first 5 minutes – that the film does not have the visual gloss that marks most Tollywood films these days. It looks, even through the hi-end PVR projectors, like an ‘80s film (there were, by the way, 12 persons in the hall for the 9:30pm show). No celebrations here.

And pretty soon, you realize that this is a copy – a frame-by-frame copy – of Taxi 9 2 11, the John Abraham – Nana Patekar starrer that released 4 months back. And a few frames later, Vishnu Vardhan Babu starts talking.

In case you haven’t seen Taxi 9 2 11, here is the tale. Raghav Pundit (Mohan Babu) is a boorish and snappy taxi-driver who masquerades as an LIC agent to his wife Uma (Sobhana). One day his cab is hired by Vijay Raj (Vishnu Vardhan Babu), the scion of a super-rich business family who is on his way to court to present some documents to prove that his late father bequeathed all his property to him and not to a friend of his father’s as his last will claims.

Winning the case is important for the squandering and philandering Vijay, since otherwise he will become a pauper. He urges and taunts Raghav to go faster and faster by showing him plenty of cash, and soon Raghav lands in an accident while jumping a signal. Vijay neatly moves off leaving Raghav in the lurch. Raghav is taken to jail.

Vijay then realizes that he has lost the key to the locker which has the documents, in Raghav’s car, and traces Raghav to the police station, but the stubborn and irate Raghav will not return it despite all lure. Vijay then lands at Raghav’s house to persuade Raghav’s wife to talk to him, and unwittingly tells her the secret Raghav has been guarding for 14 years – that her husband is a taxi-driver.

Raghav swears horrendous retribution, with an opening attempt to get Vijay killed in a road accident by sabotaging his car. Vijay survives, and swears to hit back. The Game, as the film calls it, begins.

The film is simply no comparison to its original. John Abraham is too charming and suave, and you loved him despite his being such a wastrel. Vishnu Vardhan Babu simply cannot pull off that character, and his lispy pronunciation makes him appear funny – he really should have someone dub for him.

Mohan Babu appears tired. Nana Patekar is a dynamo in dialogue-delivery, and Mohan Babu doesn’t show the kind of energy needed to bring to life a short-fused and stubborn slum-dweller. His track-record persuades you to give him the benefit of doubt and interpret it as perhaps each artist’s own style, but this depiction does not suit this character.

The film has nothing else going for it. There are several other good films around, and you really should look up the other listings.
Share. Save. Connect.
Tweet
GAME SNAPSHOT

ADVERTISEMENT
This page was tagged for
dainametelugumovi
telugu game review
Game telugu movie
Game reviews
release date
Follow @fullhyderabad
Follow fullhyd.com on
About Hyderabad
The Hyderabad Community
Improve fullhyd.com
More
Our Other Local Guides
Our other sites
© Copyright 1999-2009 LRR Technologies (Hyderabad), Pvt Ltd. All rights reserved. fullhyd, fullhyderabad, Welcome To The Neighbourhood are trademarks of LRR Technologies (Hyderabad) Pvt Ltd. The textual, graphic, audio and audiovisual material in this site is protected by copyright law. You may not copy, distribute, or use this material except as necessary for your personal, non-commercial use. Any trademarks are the properties of their respective owners. More on Hyderabad, India. Jobs in Hyderabad.