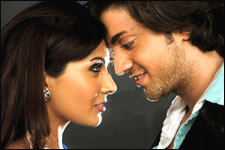 Samrat Sharma / fullhyd.com
EDITOR RATING
3.0
Performances
Script
Music/Soundtrack
Visuals
NA
NA
NA
NA
Suggestions
Can watch again
NA
Good for kids
NA
Good for dates
NA
Wait for OTT
NA
Oh, sweet irony. Mukesh Bhatt's newest low-budget, high drama film about the paparazzi is "inspired" by the English film called Paparazzi. The same way most of the Vishesh films have been "inspired" at some level or another by some Hollywood film someone in the crew took a liking to. Problem is, the source material here is highly flawed.

When Paparazzi released in 2004, everyone expected it to make a statement about celebrity and their rights to privacy, being just in time after producer Mel Gibson had just had some ugly brushes with them. Instead, it turned out to be an extremely poorly made revenge action film, tackily directed, and pathetically acted in by all corners.

On the other hand, please consider poor Raju Khan. Choreographer of countless Hindi films, close association with the Bhatts since the early days of their success (Aashiqui, Dil Hai Ki Manta Nahin among others are credited to him), and budding director. That he thought that a film based on a terrible, tacky quickie meant to do nothing else other than sell a few DVDs by cashing in on the Mel-bashing-a-photographer incident is a good idea is something I cannot fathom.

This is a Vishesh film, however, and any film that comes out must make a statement one way or the other. And sure as rain, the script is duly shoehorned with the message-mongering of the Madhur Bhandarkar kind, with all due side notes for the actors to overact in every bit that they get to do so. "Alright, all we need now is semi-talented main leads, some music that sells, and we have a winner, boys!" Only, they don't.

To showcase the lengths to which certain photographers or journalists go to in order to get an exclusive scandal, Khan indulges his media people in almost all sorts of over-the-top shallow browbeating. Every third sentence to come out of Gulshan Grover's, Sushant Singh's, or Amin Hajee's mouth is, "Hum media waaley hain"; the sentence serving as emphatic statement, explanation of behavior, and threat at all occasions.

Oh, and to showcase the kind of trauma people face while being hounded by the said media people, we have Rohan Arya (Tushar Jalota), rising star, darling of the tabloids. The media coverage and consistent hounding quickly grows from minor annoyance to major intrusion. When he becomes the new 'target' of the media peeps, they almost immediately stumble upon a secret he had.

When they catch him in a position where this secret could be revealed, he decides to flee, resulting in a car chase, and inevitably an accident, leaving someone very important to him in a coma. While the whole world is talking about his accident and the secret getting out, Tushar does what any celebrity in such a position would do - he decides to seek vengeance by intense personal violence.

Yes, that's exactly right. For all the pretensions the film has about showcasing the murky side of show business and the relationship it has with the media outlets, it is nothing but a simple revenge drama. At that, too, it fails, because a large part of the film is wasted on empty posturing and showing how evil people working for a channel or magazine can be.

It's not a complete waste of time, however. Being a Mukesh Bhatt production, the film is technically well done, though the budget constraints show at the seams. The acting, too, especially by the newcomers, is competent, and well, as mindless as this film is, there are some moments of sobriety. Completely paisa wasool is the dialog that Gulshan Grover gets to spout, however. Not for a long time have I heard him say things as unintentionally hilarious as the ones he spews.

I'd have heartily recommended this film as a light snack alternative to the other biggies playing in the cinemas right now, but the truth is it is not even worth the popcorn you'll buy while watching it. To paraphrase Irving Berlin, "There's no business (this film has to do with) Show Business."
Share. Save. Connect.
Tweet
SHOWBIZ SNAPSHOT

ADVERTISEMENT
This page was tagged for
Showbiz hindi movie
Showbiz reviews
release date
Tushar Jalota, Mrinalini Sharma
theatres list
Follow @fullhyderabad
Follow fullhyd.com on
About Hyderabad
The Hyderabad Community
Improve fullhyd.com
More
Our Other Local Guides
Our other sites
© Copyright 1999-2009 LRR Technologies (Hyderabad), Pvt Ltd. All rights reserved. fullhyd, fullhyderabad, Welcome To The Neighbourhood are trademarks of LRR Technologies (Hyderabad) Pvt Ltd. The textual, graphic, audio and audiovisual material in this site is protected by copyright law. You may not copy, distribute, or use this material except as necessary for your personal, non-commercial use. Any trademarks are the properties of their respective owners. More on Hyderabad, India. Jobs in Hyderabad.