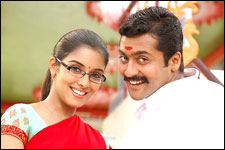 EDITOR RATING
3.0
Performances
Script
Music/Soundtrack
Visuals
NA
NA
NA
NA
Suggestions
Can watch again
NA
Good for kids
NA
Good for dates
NA
Wait to rent it
NA
The credits of Deva do not take themselves seriously. After flashing the names of Surya, Asin and Vadivelu, the screen just says "and your favorite stars". It almost sounds like what might be on this one's epitaph: "Please move on to the next tombstone."

Indeed, the makers of this one know its exact place in Telugu film chronology - in the annexures. Like one last papad fried just to make use of oil that is still hot enough much after the gas has been turned off, the Telugu market is just to squeeze the last drops of cash out of the movie. And we should treat it that way in the review too - almost anything is too much detail. But since we at fullhyd.com are too professional, we'll lose sight of the bigger picture and thrash this out.

Deva is the dubbed version of the Tamil "Vel". And the problem really starts there - you dub a movie into another language if it is significantly different from what people of that tongue are used to seeing, and thereby offsets the disadvantages of an unrecognizable starcast and alien customs. Which is why Chandramukhi, Ghajini and Aparichitudu were hits - arguably the only real big hits in dubbed films, if you ignore Sivaji which was superbudget, superstar and superhype.

Deva is set in rural Tamilnadu which means you'll have to endure a lot in male dressing that you may not really consider avant garde, and the film has no payoff really for that. It's a tale you have seen a gazillion times in Telugu - twins separated at birth, and getting reunited again. Yes, there's Asin - hopefully that's a big plus for you.

Deva (Surya) is the adopted son of a rich rural family that is the paterfamilias for the village, saving them from the atrocities of Nagabhushanam (Kalabhavan Mani). Much the macho, he fronts all battles with the evil one, taking care of the family and the villagers.

Deva was stolen as an infant and abandoned, and his twin Vasu (Surya) is head of a detective agency in Hyderabad, staying with the original parents, and in love with Swathi (Asin). When Vasu randomly spots his long-lost brother, he trudges along to the village, and struggles against Deva's paranoid foster family to get them to recognize him.

But that's still not enough, with Deva himself refusing to leave the family or get in touch with his real parents. But then the menace of Nagabhushanam becomes too much, and the brothers decide to swap places without telling anyone.

Surya looks and acts good, if it really matters to you. And the romance with Asin is pretty engaging and innovative, even if brief. Asin, of course, has plenty of expression and the glamor factor. Kalabhavan Mani as the villian does a good job, though he hasn't enough material to show off his entire talent - it's hard to see him as just another villian after Gemini. Some humor involving Vadivelu is good.

There's nothing here, however, for you to defend your right to watch it. The script was written in the time it will take you to analyze that previous sentence, and the movie unfortunately runs for far more time than that. Try to sit at home and think about your role in the universe, or at least the other way round.
Share. Save. Connect.
Tweet
DEVA SNAPSHOT

ADVERTISEMENT
This page was tagged for
surya deva movie review
telugu dubbed tamil movies Deva thash
Deva Telugu Surya movie actor
deva telugu full movie
deva movie review
Follow @fullhyderabad
Follow fullhyd.com on
About Hyderabad
The Hyderabad Community
Improve fullhyd.com
More
Our Other Local Guides
Our other sites
© Copyright 1999-2009 LRR Technologies (Hyderabad), Pvt Ltd. All rights reserved. fullhyd, fullhyderabad, Welcome To The Neighbourhood are trademarks of LRR Technologies (Hyderabad) Pvt Ltd. The textual, graphic, audio and audiovisual material in this site is protected by copyright law. You may not copy, distribute, or use this material except as necessary for your personal, non-commercial use. Any trademarks are the properties of their respective owners. More on Hyderabad, India. Jobs in Hyderabad.