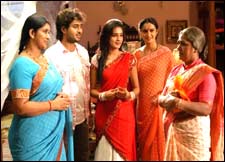 EDITOR RATING
5.0
Performances
Script
Music/Soundtrack
Visuals
NA
NA
NA
NA
Suggestions
Can watch again
NA
Good for kids
NA
Good for dates
NA
Wait for OTT
NA
It's nice to see Uday Kiran back on screen. When fate is harsh to you, it at least makes you the underdog. Like, whoever thought one day a fullhyd.com review would start with "It's nice to see Uday Kiran back on screen"? But we at fullhyd.com are like everyone else out there - we root for the underdog. We spring about breathlessly in the aisles, we whistle feverishly, we do the teen-mar, and we repeat in that order.

Unfortunately, Uday Kiran being back on screen is not an end in itself. Nor is showing Maa Durga 6 times. Neither has been known to swing a film's fortunes. Viyyala Vari Kayyalu (VVK) suffers from the same problem as 95% of Telugu films - they don't get it right.

VVK is neither here nor there - you go expecting a light-hearted comedy featuring 2 large families trying to get the better of each other in a festive backdrop, and and a youthful couple trying to squeeze time together in the midst of the brouhaha. What you get is plenty of seema violence, and melodrama sans comedy and romance. Like the first mangoes that hit the market in summer, it looks better from outside than it tastes.

Vamsi (Uday Kiran) is a hair-stylist who saves Nandini (Neha Jhulka) from some goons. She falls in love with him, and courts him in some completely uninspired scenes. Vamsi then travels to her seema village to convince her elder brother Bhupathi (Srihari), a rich landlord, patriarch and factionist there who wields clout over all the area, to let them marry.

Bhupathi however wants a son-in-law who can carry on his legacy of being a warrior and protector of the meek, and rebuffs Vamsi's request, while still allowing him to stay for a week as a guest since he's given his word. In this week Vamsi performs heroics in the seema faction fights, and when he finally saves Bhupathi's life itself from a plot by rival Vengal Reddy (Jayaprakash Reddy), he wins Bhupathi's heart and his daughter's hand.

The problem now shifts to Vamsi's family - his father Padmanabham (Sayaji Shinde) is a retired judge of high integrity, and refuses to let his son marry the daughter of a factionist. Bhupathi however promises the young couple that he will do what it takes to get them married, and so when Padmanabham challenges him to win a by-election in his area without resorting to any violence based purely on goodwill, takes it on. However, the rivals resort to large-scale bombing and killing of inoocents, and Bhupathi is torn between his commitment to the couple, and the suffering of innocents.

VVK is more of a Srihari movie than an Uday Kiran movie, playing itself out in the manner of a Dhee. Only, Dhee worked because of the comedy. VVK has the whole pantheon of comedians - Venu Madhav, Krishna Bhagawan, Raghu Babu, Jayaprakash Reddy, Dharmavarapu Subrahmanyam, Jeeva, Giri Babu, Suman Shetty - but no real lines for them. The few jokes are mostly clichés, and you have to be content with the presence and voices of the comedians rather than any real humor.

There's no romance either, unlike in Uday Kiran's hits. After the initial half-hour that features a pretty cooked-up courtship, the lead pair hardly interact, as the film needlessly shifts focus to seema factionism and violence. Then, the plot relies too much on coincidences - all the instances when someone's life or modesty is saved - for you to really take it seriously. And you lose respect for it completely when you see a scene completely lifted from DDLJ.

Srihari dominates the film, as much in melodrama as in the completely implausible fights. Uday Kiran does not need to do much outside his range, and does fine. Watching him in a Telugu film after such a long time makes you want to see Manasantha Nuvve again, if only for nostalgia - now there was a pure romantic comedy.

Neha Jhulka brings the needed exuberance to a young college girl character, and Sayaji Shinde and Jayaprakash Reddy perform their roles with flair. The music is average fare just like, unfortunately, the movie.

ADVERTISEMENT
This page was tagged for
Viyyalavari Kayyalu telugu movie
Viyyalavari Kayyalu reviews
release date
Uday Kiran, Neha Jhulka
theatres list
Follow @fullhyderabad
Follow fullhyd.com on
About Hyderabad
The Hyderabad Community
Improve fullhyd.com
More
Our Other Local Guides
Our other sites
© Copyright 1999-2009 LRR Technologies (Hyderabad), Pvt Ltd. All rights reserved. fullhyd, fullhyderabad, Welcome To The Neighbourhood are trademarks of LRR Technologies (Hyderabad) Pvt Ltd. The textual, graphic, audio and audiovisual material in this site is protected by copyright law. You may not copy, distribute, or use this material except as necessary for your personal, non-commercial use. Any trademarks are the properties of their respective owners. More on Hyderabad, India. Jobs in Hyderabad.