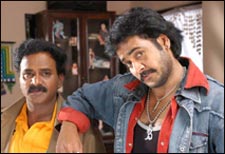 EDITOR RATING
5.0
Performances
Script
Music/Soundtrack
Visuals
NA
NA
NA
NA
Suggestions
Can watch again
NA
Good for kids
NA
Good for dates
NA
Wait to rent it
NA
Sivaji is in 2007 what Ravi Teja was in 1997. Hopefully there's a Puri Jagannath somewhere in Sivaji's lifeline too. For now, he'll have to make do with Vikram Gandhi et al.

For the uninitiated, State Rowdy was a Chiranjeevi movie of 1992, with a scene where Chiranjeevi has a bike with a super-powerful magnet that yanks off all the weapons from the hands of about 1,000 goons gathered to beat him up. The State Rowdy of 2007 has Chandramohan, an orthodox priest, repeatedly visualizing his daughter singing detailed duets with a man he hates, once in a menage a trois. Now write your own editorial about Telugu movies and mail it to us - the best entry will win a ticket to this film in the front row of Amaravathi.

To be fair, the State Rowdy of 2007 has its redeeming features. Much like a bulb operating on a moody electricity connection, when it works, it works just fine - it's the bad patches that make you want to turn it off. Primarily a comedy, this one does what ancient Indian scriptures have always recommended - give Venu Madhav a full-blooded role. And Sivaji, with his rapid-fire delivery, makes up for Ravi Teja's absence in every movie of his. Add just about every comedian in the telephone directory, and you have the basic ingredients in place.

Rambabu (Sivaji), a docile unemployed man, needs cash despoly, and agrees to act as a goon in a plot hatched by bumchum Autostar (Venu Madhav, an auto driver), to throw some ruffian college student tenants out of the house of Subrahmanya Sastry (Chandramohan), an orthodox Brahmin who lives with his daughter Vimla (Madhu Shalini). Rambabu takes on the name of Bullet Babu, who is a known gangster in the old city, and lands up at the house on a borrowed Bullet.

He however needs a house to live in himself temporarily, and after scaring the students with some acting, he starts staying there himself with them under the pretext offered to Sastry that they will need a week to vacate, and he will stay to ensure they are on good behavior and come through.

Vimla falls in love with him when he actually beats up some goons who try to attack her (don't ask). Soon a misunderstanding leads Rambabu and Autostar to kidnap Priya (Mallika Singh) from her marriage, and she too falls in love with Rambabu. The man who was supposed to marry her, a wicked CI (Subba Raju), is now out to get her back, and the actual Bullet Babu (Rami Reddy) wants Rambabu. How the movie ends forms the rest of the story.

The movie has a pretty good number of laughs, depending on our definition of pretty good. Like the whole blood cancer bit. Sivaji has a good flair for humor with his rat-a-tat dialogue delivery, and Venu Madhav disguises some sorry lines in his hyper-active demeanor, adding life to the movie all through. However, mixing action and violence into the theme is the undoing of the movie, adding more lack of credibility than the prescribed limit, and generally being boring.

Mallika Kapoor and Madhu Shalini have little to do other than be in the songs - which, by the way, are a pain, jutting into the movie most unwelcomely - and the movie displays the standard scant respect Telugu films show for the pain of unrequited love by making it look like it's a minor issue for Vimla to not get her love, just so the movie can have 2 different faces and navels for the duets.

ADVERTISEMENT
This page was tagged for
State Rowdy - Veedikantha Scene Ledu telugu movie
State Rowdy - Veedikantha Scene Ledu reviews
release date
Sivaji, Mallika Kapoor
theatres list
Follow @fullhyderabad
Follow fullhyd.com on
About Hyderabad
The Hyderabad Community
Improve fullhyd.com
More
Our Other Local Guides
Our other sites
© Copyright 1999-2009 LRR Technologies (Hyderabad), Pvt Ltd. All rights reserved. fullhyd, fullhyderabad, Welcome To The Neighbourhood are trademarks of LRR Technologies (Hyderabad) Pvt Ltd. The textual, graphic, audio and audiovisual material in this site is protected by copyright law. You may not copy, distribute, or use this material except as necessary for your personal, non-commercial use. Any trademarks are the properties of their respective owners. More on Hyderabad, India. Jobs in Hyderabad.