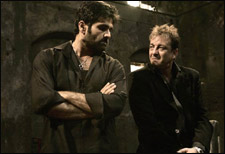 Samrat Sharma / fullhyd.com
EDITOR RATING
6.0
Performances
Script
Music/Soundtrack
Visuals
NA
NA
NA
NA
Suggestions
Can watch again
NA
Good for kids
NA
Good for dates
NA
Wait to rent it
NA
It's almost as if Sanjay Gupta thinks he has made a real movie. There is enough bravura, high-fiving chutzpah and self-congratulatory shots in all ten stories to make you think that Gupta and his friends think that they have something momentous, something path-breaking - a portmanteau film, a collection of short stories, and a new experience for mainstream audiences.

They are of course, wrong. There is a very big problem with the sum of all parts that this film is - it makes absolutely no effort to connect the ten short stories. There is no thematic, emotional, or even technical accomplishment thread that puts any of these stories together. They are all as diverse as chalk and black pepper, begging the question why - why would a bunch of semi-entertaining short stories be strung together, instead of being vignettes presented elsewhere as DVD extras or TV movies?

The answer that Gupta and his band of chums have for us is just because. So thusly we have to sit in front of the screen, seeing ten absolutely different stories unfold one by one, forcing us to judge each of the stories in their own merit. It's a clever ploy and it works; if there are at least 3 stories you like, you'd have had 30 minutes of entertainment in a two-hour film, which would make it okay in your books. I'd like to draw your attention to the fact that it still isn't the whole film.

Even the ten stories together aren't the whole film. As a complete whole, it's a zero film. It has absolutely nothing to present as an umbrella to the anthology of short stories. Imagine, nothing. Resigned to fate, you must now judge individual stories for their artistic merit. Which is like judging a complete meal on merit of its different courses, all from different cuisines, with the only thing common between them being that they are served on the same plate.

First, the good news. Sanjay Gupta is the de facto director of the film, with five of the ten stories directed by him, which means there is at least a semblance of technical sheen to the films. And surely enough, handheld cameras with shaky viewpoints, being all the rage in town these days, are almost exclusively employed throughout the film. Not that you have time to notice any craft at display here, because the focus is on telling the stories, with (more often than not) a twist to spice things up in almost every one of them.

By that yardstick, Meghna Gulzar's Puranmaashi with Amrita Singh depicting a small-town woman and the price she pays for thinking of herself just once is noteworthy. Rohit Roy's Rice Plate is elevated by the fantastic acting by Shabana Azmi as a xenophobic woman and her encounter with a deliciously understated Naseeruddin Shah. So is the case with Gubbare by Sanjay Gupta, an ordinary story about love lost and a girl's inspiration to patch things with her husband, made more interesting by being essentially a Nana Patekar conversational piece.

In the bad news, Apoorva Lakhia once again proves that he is a man with absolutely no talent, in a ridiculously badly directed and enacted Sex On The Beach. Absolutely pitiful, and the whole movie is poorer for it. Zahir is clunky and unwieldy, and one of Sanjay Gupta's many cheap shots in the film. The other being Strangers In The Night. Both these segments are purely for their twist value, and I detested them - only, not as much as Sex On The Beach.

Gupta's penchant for end-moment trickery does not end there, as he delivers a slickly shot but ultimately chaotic Rise And Fall. Tip of the hat for whoever did the lighting for the segment, however. Sanjay Dutt is in top form here, so at least it's not completely wasted. Matrimony is the same, a boring story saved by the length of the vignette and a twist. In all fairness, the twist is chuckle-worthy, and gets the crowd going for the film.

Love Dale by Jasmeet Dhodhi and High On The Highway by Hansal Mehta are nearly as bad as Sex On The Beach, though Lovedale also has the added value of being completely atrociously acted in.

So there we have it - ten stories, very few good, most bad, and a handful decidedly mediocre. What does that make this? I don't know, truth be told.

It is like making a mix tape for a friend - only, this time you don't make it with a theme in mind, but just anything you get your hands on. This film truly employs 'assorted' in its definition, and I'm not sure how the makers think it's a good thing. That said, this is also a film which, depending on your taste, gives you 10 to 40 minutes of entertainment (I am willing to go out on a limb here and say that you can't possibly like more than 4 out of all these vignettes).

If you do decide to go, do yourself a favor and buy the popcorn during the Apoorva Lakhia and Jasmeet Dhodhi segments. You will likely save yourself some headache, and won't miss the Jodhaa Akbar promo in the intermission. Better than any of the stories anyway.
Share. Save. Connect.
Tweet
DUS KAHANIYAAN SNAPSHOT

ADVERTISEMENT
This page was tagged for
dus kahaniyaan full movie
hindi movie dus kahaniyaan
Dus Kahaniyaan hindi movie
Dus Kahaniyaan reviews
release date
Follow @fullhyderabad
Follow fullhyd.com on
About Hyderabad
The Hyderabad Community
Improve fullhyd.com
More
Our Other Local Guides
Our other sites
© Copyright 1999-2009 LRR Technologies (Hyderabad), Pvt Ltd. All rights reserved. fullhyd, fullhyderabad, Welcome To The Neighbourhood are trademarks of LRR Technologies (Hyderabad) Pvt Ltd. The textual, graphic, audio and audiovisual material in this site is protected by copyright law. You may not copy, distribute, or use this material except as necessary for your personal, non-commercial use. Any trademarks are the properties of their respective owners. More on Hyderabad, India. Jobs in Hyderabad.